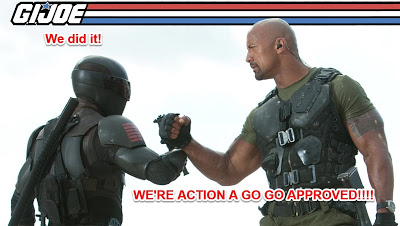 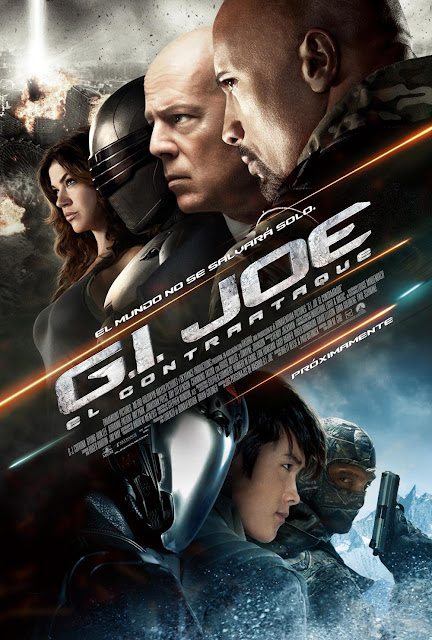 So…back in 2009 a little movie came out that (as these Hollywood films tend to do) managed to sh** all over our childhoods with a big smile on its face. No, I’m not talking about Wolverine Origins, er…or Transformers: Revenge Of The Fallen. I’m talking about G.I Joe: The Rise of Cobra.

I didn’t see Rise of Cobra in theatres. I just couldn’t. The trailer was painful enough. I did, however, end up watching the movie on Netflix. I stopped through. It was just terrible. My childhood could only take so much violation. Thankfully, somehow, G.I Joe: Retaliation has managed to make up for those sins.
As childish as it may sound, this film has two winning things going for it: Its f#@*&-it-lets-add-more-ninjas mentality and Dwayne “The Rock” Johnson. The Rock primarily seals the deal, snuggly fitting into an action role that he can call home. True to form, Johnson delivers a totally committed performance throughout. I’ve always said he’s been the best part of a lot of bad movies, but here he gets to shine brightest.
As for the rest of the cast, few made it to the sequel. Channing Tatum sneaks in as Duke, and Ray Park is back as Snake eyes, but it says a lot about a movie franchise when your most popular character from the first movie doesn’t talk.
Bruce Willis is a welcome (if underwhelming) addition to the cast, and Adrianne Palicki heats up the screen and holds her own with the rest of the good guys. On the side of evil, Luke Bracey’s Cobra Commander goes full tilt boogie. Bracey replaces Joseph Gordon-Levitt who originally played the Commander in Rise of Cobra. Honestly, it was a bit of a mystery as to why he played the part in the first place.
Performances aside, what carries this movie is the action. Really, it’s no surprise coming from John M. Chu, the director of flashy substance-less fair like Step Up 3-D and Justin Beiber: Never Say Never. Somehow teaching Channing Tatum how to two-step prepared him to make one kick-ass action movie.
The downside to all this is that the movie is seemingly edited by a schizophrenic child and a story that is malformed.
Action A Go Go or Action A No No? ACTION A GO GO 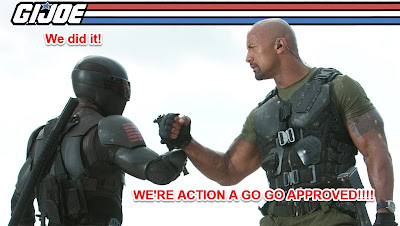 But who wants to see an ACTION MOVIE for the story?
Just when the things got ridiculous, where you expect it to lose you, it manages to grab you and convinces you to just roll with it. I was literally smiling from ear to ear by the end of it because of the movies sheer audacity and genuine surprises. Feel free to go see it and enjoy it. Just turn off your brain first…