WORLD WAR Z: These Are Not The Zombies You Are Looking For… 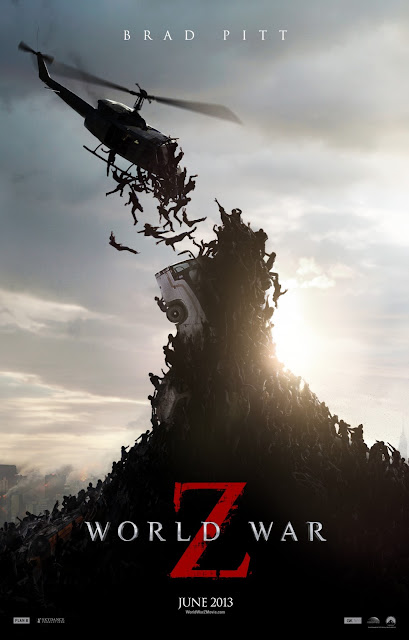 This movie is a long time coming. Based on the celebrated novel of the same name written by Max Brooks (coincidently the son of screen legend Mel Brooks) that may have kicked off the zombie craze, this movie has had a troubled birth. Long in development, subject to script changes and an entirely new ending it has finally hit theatres to terrorize us all. But can it pass the test? Will it soar in theatres and recoup it’s arguably massive budget? Or will it be the final nail in the coffin a Zombie craze that maybe, just maybe, has overstayed it’s welcome.

Well, I can’t answer any of those questions. I can just tell you if it’s good or not.

But enough prattle! Let’s dig in the WORLD WAR Z, the biggest zombie movie ever!

Marc Forester (Monsters Ball, Quantum of Solace) directs this kinetic action movie about the zombie apocalypse starring Brad Pitt as Gerry Lane, a former UN badass who get’s swept up in the zombie epidemic along with his wife Karin Lane (played by Mareille Enos, Gangster Squad) and two children. They make it out of their hometown of Philadelphia to find out that the world is falling apart. Lane get’s enlisted to find any clues to how it started, and hopefully a cure.

And it spirals out from there. I would like to definitively say what Lane did before he retired to family life but it was purposefully avoided in the movie several times and by the time it was revealed I wasn’t paying attention. That’s not something you want to hear from a reviewer, I know, but seriously, they just wouldn’t say.

Which brings me to the characters themselves. The standouts are Daniela Kertesz, who plays an Israeli soldier named Segen who inadvertently get’s wrapped up in Lane’s mission and David Morse who play’s “Ex CIA Agent”. Some other minor players deliver the good, especially towards the end of the film.

But it ends there. The rest of the cast is relegated to play relatively thin stereotypes who exist mostly to move the plot along.

The best parts of this movie occur when it’s digging into the grim details of this zombie apocalypse and the science around it. Along with some ingenious little “tactical” moments sprinkled throughout WORLD WAR Z will keep you guessing until the end and having you nod in agreement with Lane as he makes discoveries or just plays it smart.

That, and some intense action scenes that have you looking all over the screen to see what is happening. The scope of these attacks and the unyielding wave of ruin the zombies bring can only be matched by the Arachnids from Paul Verhoeven’s classic STARSHIP TROOPERS, and that is high praise indeed.

Sadly, once the camera is on the ground with actual people the movie starts to fall apart. For instance, it has a zombie problem. Not that there are too many, but when you actually see them you get a short series of jump cuts and then it’s on to the next scene. When the zombies are finally revealed they are nearly comical in execution with popping and locking ensuing for no logical reason. Seriously, one might have just been dancing.

Worse than this is the story itself. It leaps from plot point to plot point, location after location, seemingly oblivious of things like physics, time, and common sense. Instead of focusing in to amp up the tension or lingering in a conversation to let the emotional weight of events sink in it is just onto the next scene. By the end it manages to figure itself out and turns into the smart zombie movie it want’s to be….which…I hate to say this….may be attributed to Damon Lindelof’s massaging of the script.

THE VERDICT…ACTION A NO NO 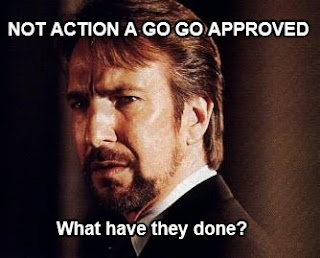 The biggest problem this movie has is it’s identity crisis. It really wants to be a true blockbuster. And it really wants to be a zombie movie. But a rating of PG-13 (No doubt a move to increase revenue) kills both aspirations. At times this movie almost got me, but the very nature of a zombie movie is cannibalism and carnage and those things are messy. And this movies constant pulling back and lack of focus keeps it from achieving greatness.

Or just watch a few episodes of WALKING DEAD instead.