Are You From Earth? Die Antwoord Inside.

Meet the husband and wife music duo coming soon to a theater near you in Neill Blomkamp’s Chappie.

Not too long ago I was watching trailers for films due to be released this year. When I saw the trailer for Chappie, I recognized two individuals still unknown to many despite their growing popularity.  In fact the people who were watching with me had no clue who they were. The two I’m speaking of are Yo-Landi Visser and Ninja. Heard of them? If not, I have the answer and it’s Die Antwoord. Literally translating to “The Answer” in Afrikaans, Die Antwoord (Dee Ant-word) is a hip-hop/rave/something completely out of this world musical duo from Cape Town, South Africa.

The two are husband and wife and let me tell you, they are something to behold. A friend of mine introduced me to their music a while back and it was not so much their music that kept my head shaking, eyes wide and jaw dropped, it was the music videos that went along with it. Their lyrics are equally worthy of head scratching, but it’s their visual and artistic choices in each and every video that really gets me. In a good way or bad way, I can’t tell, but I can say, it’s hard to look away. I thought their music was crap when I first heard it and like many others, wondered if they were a serious group (is that even her real voice?) Well they are (and it is), and despite not fully understanding their lyrics or what on Earth is happening in their videos – or why, whoever doesn’t know about them now, will know about them soon enough. 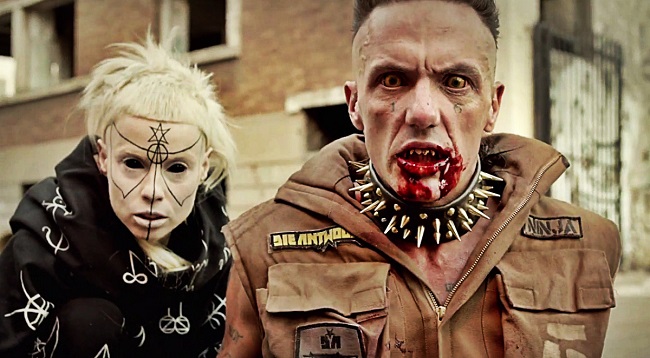 The first DA music video I watched was Baby’s on Fire. It’s so insanely ridiculous, I had to immediately watch it two more times and then binge watch every music video of theirs ever made. The details in each video cannot all be caught in a single viewing. In Baby’s on Fire for example, from the pictures hanging up in their family’s dining room, to realizing the prayer thanking God for Satan was about their dog, it is so hard not to take a second look and then a third and fourth. If not immediately, you will revisit it again someday soon. Whether you’re into their sound or not, their music will get stuck in your head for days, you will  and tell all of your friends about them. I can’t say I would ever download any of their tunes, but their videos are something I will always watch. I really can’t put a finger on them and in a way, that’s why I dig them. They are totally…. different.

Below is one of their newer videos. While certainly not their creepiest or most offensive (really) it features appearances by DA fan Marilyn Manson, Flea from The Red Hot Chili Peppers, Jack Black, Dita Von Tease, model/actress Cara Delevinge and the ATL twins.

Watkin Tudor (Waddy) Jones a.k.a Ninja founded Die Antwoord with Yo-Landi after a few “disposable” projects he worked on for a few years prior. The pair is backed by the catchy beats of DJ Hi-Tek. They represent “zef” culture loud and proud. Zef, is an Afrikaans slang word that translates to common. It usually describes one as being a “red-neck”, “trashy” or as Yo-Landi puts it “It’s associated with people who soup their cars up and rock gold and shit. Zef is, you’re poor but you’re fancy. You’re poor but you’re sexy, you’ve got style.” 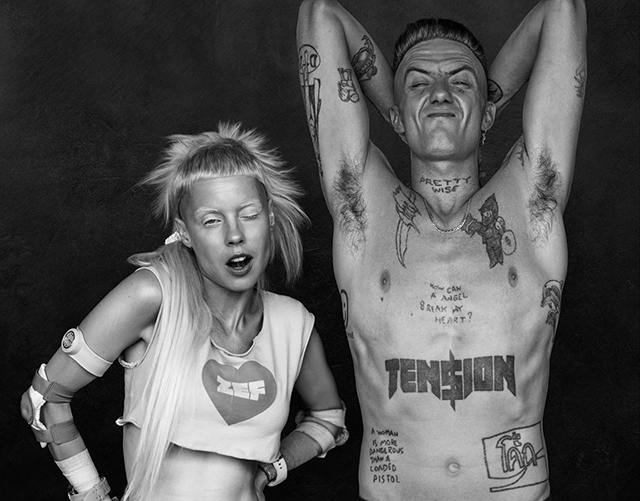 In 2012, Die Antwoord was approached about opening for Lady Gaga during her South African, Born This Way tour. Not only did they decline, they then used her likeness getting a prawn removed from her lady parts and then getting eaten by a lion in the music video for their song Fatty Boom Boom. Ninja was reported as saying “We like making pop music, but we like making hardcore music at the same time, mixing them, but they’ve got, like, soul. It’s not like weak, superficial shit. You know?” That went on to cause a beef between the pop culture queen and DA. They did however decide to open for Jane’s Addiction when asked that same year. Reason being, that they actually like the band. They even did an interview with guitarist Dave Navarro of JA that correlates their in your face style of music and videos to that of Americans, complimentary of course.

In other turn downs made by the two, Yolandi was asked to consider the role of Lisbeth Salander in David Fincher’s The Girl with the Dragon Tattoo and Ninja was asked to consider a role in Neil Blomkamp’s Elysium. Both turned down because they didn’t want to act as anyone but themselves.  So naturally, when Blomkamp came back with an offer to be exactly that in the upcoming film Chappie, they accepted. In the film, Chappie is a police robot kidnapped by Yo-Landi and Ninja who become his adoptive parents. The pair’s intentions are to reprogram Chappie into becoming a fighter to survive a gang debt. Chappie is due out March 2015, meanwhile Die Antwoord’s new album Dark Force is scheduled to be released in February. 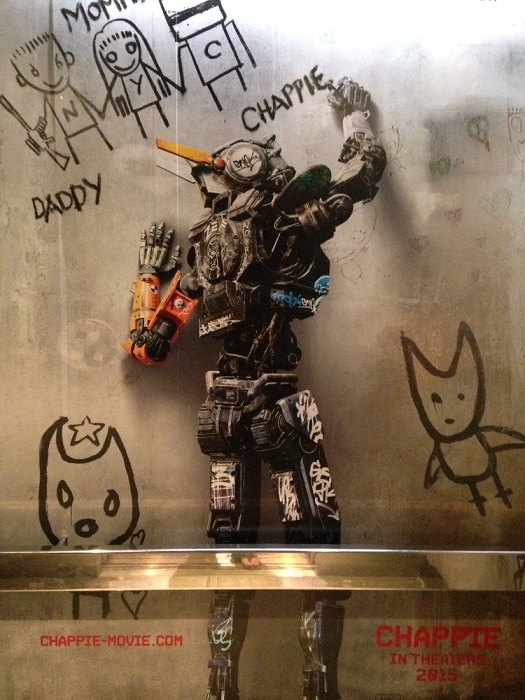 Here’s a little look at Ninja and Yo-Landi acting as themselves in a short film by Harmony Korine. Umshini Wam is Zulu for “Bring me my machine gun”. Now excuse me while I go get my Die Antwoord video fix in.

What are your thoughts on Die Antwoord? Love them? Hate them? Confused? Is this your first time hearing about them? Let us know in the comments.