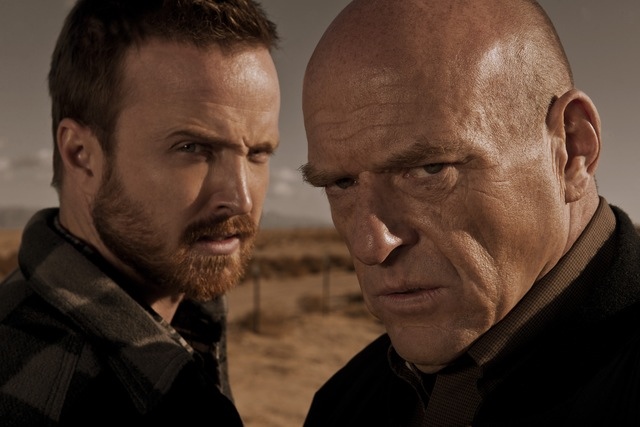 Sweet Lord have Mercy. My nerves simply cannot take this kind of thing.
That, my friends, was television at it’s finest. Perfect writing, perfect direction, perfect acting. I may be getting ahead of myself but To’hajiilee may just be the finest episode of Breaking Bad ever produced, and considering how many powerful and heart-stopping episodes this series has produced, that is saying a whole hell of a lot.
Breaking Bad is something of an enigma on the television landscape in how much creative freedom it gives it’s directors. Showrunner Vince Gillian not only gives them free reign, he encourages them to imbue each episode with their own unique sensibilities. The result is a show far more cinematic in nature than any other on television (yes, even Game of Thrones), and a show infused with the passions of the person behind the camera. The greatest episodes of Breaking Bad are driven by a level of conviction that no other show can hold a candle to, and that is why Breaking Bad is the most talked about show on television. For this set of elite directors, this is more than just their day job, this show is a platform from which they can express themselves through a story that they’re passionate about. Episodes such as George Mastras’ Dead Freight, Michelle MacLaren’s Gliding Over All and Rian Johnson’s Fly simply could not have happened on any other show. It’s episode’s such as these where the passion of the directors can be felt by even the most casual television viewer, it’s magnetic really. You can have all the action you want in your show, but meticulous, no-holds-barred filmmaking artistry will always win the hearts of the audience.
With To’hajiilee, executive producer Michelle MacLaren returns to bat for her final directing credit on the series, and boy, does she make it count. From the moment Walt receives a taunting phone call from Jesse, the episode becomes an intense roller coaster of a thriller. Walt screaming “justifications” for his actions to Jesse through the phone, while Jesse audibly relishes feigning the destruction of Walt’s ill-gotten gains. As a card-carrying despiser of Walter White, I admit to experiencing a perverse amount of joy observing Walt’s panic while he believed spoils of his empire were being burned out of existence. For the first time in quite a while, Walt had completely lost control of the situation. He had lost the upper hand and he was desperately trying to grasp at his power as it forever slipped away from him, and boy was it glorious. For a while at least. After the realization that he had been duped finally dawned on him, Walt made one final, misguided attempt to turn the tables back in his favor: he called the Nazi’s. Upon the appearance of Hank he attempted to call them off, not knowing that there was no stopping the wildfire he had just lit. 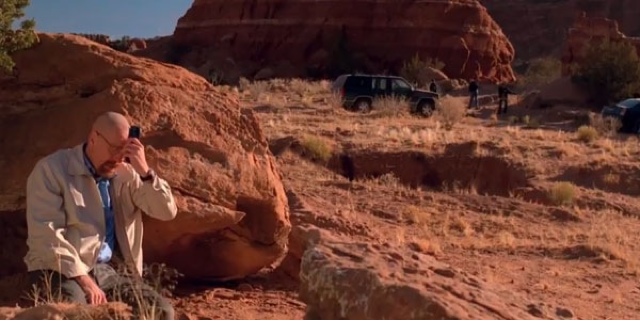 Breaking Bad‘s western ascetic resurges like never before in this final stretch of episode. Walt’s slow, seemingly eternal walk of shame towards Hank, Jesse and Gomez evokes imagery of old Sergio Leone westerns, and Michelle Maclaren milks this scene for all it’s dramatic potential. The tension in this sequence alone would have made this a Breaking Bad all-timer, I was on the edge of my seat the entire time wondering to myself exactly how, or if, Walt was going to weasel his way out yet again. But it never happened. Hank, for however brief a time, reigns victorious over Heisenberg. He finally has his Moby Dick, Walt appropriately dressed in white for the occasion, and he revels in his victory, gloating over Walt with as much self-righteous venom he can muster. And then, in what may be the series’ most heartbreaking moment thus far, he calls his wife and excitedly tells her the news. The look of relief on Marie’s face made my stomach just drop, dread lingers over this deceptively happy scene like an ominous dark cloud. By the time Hank has locked the handcuffed Heisenberg in his car, it was too late. It had been too late. Since the very first episode, it had been too late.
What had been a source of joy not ten minutes prior swiftly became the most gut-wrenching, stomach-churning sequence I can ever recall watching. Walter White lost control of the situation permanently, and I should have known better than to think for one second that karma, being the b***h that it is, would only punish Walt for his misdeeds. Vince Gilligan goes Old Testament on this one, and it’s about as horrifying as I could ever imagine it. Walt screams helplessly from inside the car while Uncle Jack, Todd and the rest of the neo-Nazi gang arrive at the party. He has no cards left to play, he has nothing left up his sleeves to slink out of this situation with. Walter White, the mighty Heisenberg, is helpless to stop the hellfire from raining down upon the heads of those he, in his own twisted way, cares about the most. The sight of Walt helpless would’ve put a victorious grin on my face not a half hour ago, yet hear we are, and the reality of the situation is sickening. MacLaren’s masterful directing is at it’s most potent right in these few crucial seconds. What is merely a minute or two feels like hours as Gomez and Hank are at at a stand-off against Uncle Jack and Co. As the camera frantically zooms in on Jesse, Walt, Hank and Gomez’s faces, an unwavering sense of fear possesses the screen. And then, after a moment of silence that feels like eternity itself, the firing begins. It all happens too fast to process but too slow to escape from. The Nazi’s firing, Gomez and Hank running for cover, Walt ducking down below the window of the car. There is nowhere to run, nowhere to hide. The most repulsive, amoral scum this show has seen are about to gun down some of the most loved characters and there is nothing you or Walter White can do about it. It’s not glorious, it’s not poetic, it’s not the ceremonious offing that I had envisioned for Hank or Gomez or Jesse’s ends. It’s just awful, no matter how you slice it. More gunfire.
Cut to black.
There is basically no chance of Gomez and Hank surviving this. The scene is made all the more painful due to it’s lack of conclusion. We, the viewers, must wait until next week to be subjected to the inevitable.
Who knew entertainment could be so stressful?
Three to go.
Episode Grade: A+
Other Thoughts:
I am officially a member of the Huell fan club.
The neo-Nazi’s are perhaps more perceptive than I give them credit for; Declan DID look like Wolverine.
I am thoroughly unprepared for the soul crushing world of pain that’s about to fall on Walt Jr. I simply can’t adequately prepare myself for that.