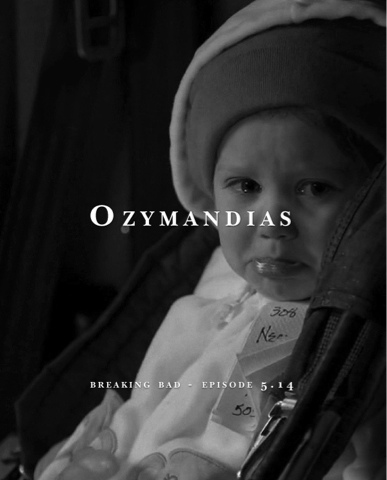 “I met a traveller from an antique land
Who said: Two vast and trunkless legs of stone
Stand in the desert. Near them, on the sand,
Half sunk, a shattered visage lies, whose frown,
And wrinkled lip, and sneer of cold command,
Tell that its sculptor well those passions read
Which yet survive, stamped on these lifeless things,
The hand that mocked them and the heart that fed:
And on the pedestal these words appear:
“My name is Ozymandias, king of kings:
Look on my works, ye Mighty, and despair!”
Nothing beside remains. Round the decay
Of that colossal wreck, boundless and bare
The lone and level sands stretch far away.”
– Percy Shelley, “Ozymandias”
In my review of last week’s episode, “To’hajiilee”, I praised Vince Gilligan for his willingness to give the series’ directors creative freedom and letting them truly own the episode they’re given. “Ozymandias” is another perfect example of that directorial freedom elevating an already phenomenally written episode to new heights.
This week it’s Rian Johnson taking the wheel, again proving why he’s also successfully breaking into the film industry. The cinematic quality of last week makes a return, heightening the tension and drawing the audience in with an intensity nigh unseen on television. The episode opens with a flashback around the time Walt first began his meth business; clad in only his tightie-whities and an apron, Walt lectures Jesse on the specifics of meth-cooking while his protégé sits on the other side of the classic Winnebago looking profoundly disinterested. This return to the origin fills the events soon to come in the episode with a sense of finality. It reminds us how far we’ve come from Heisenberg’s genesis, and not in a positive way. Walt’s ability to lie, now his second nature, took practice and thought back then as illustrated when we hear him rehearsing a little fallacy he then feeds to his wife about his job keeping him out late. He and a pregnant Skyler then discuss dinner plans, and possible baby names over the phone, unaware of the turn their lives are about to take. The scene then fades away, leaving us with an image of walking winds and an empty desert.
That was a long time ago.
The episode then proceeds to throw us straight back into the hell we endured the week prior; Gomez had already been wasted and Hank is incapacitated by a bullet to the leg. Despite Walt’s pleas for mercy, Hank acutely aware that his end has arrived and decides to meet his fate as the honorable DEA Agent he has always aspired to be. It should say something that Hank dying with his dignity intact is just about the happiest thing that happens in the entire episode. It all goes downhill from here. 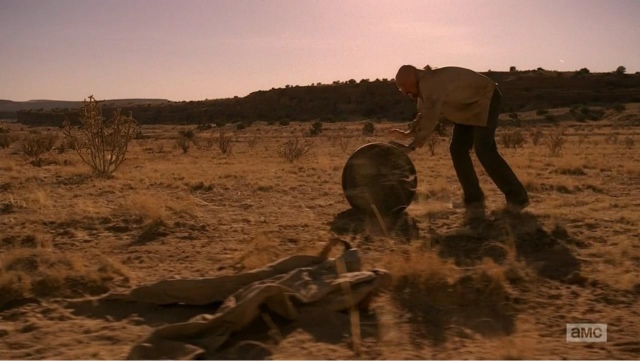 Jesse gets taken by the Neo-Nazis to be tortured and executed by Todd, but before he leaves Walt goes out of his way to inform Jesse of his hand in Jane’s demise. It is in this moment that Walt is at the most despicable that we’ve ever seen him. Unleashing his hatred upon Jesse, detailing the events of his girlfriend’s death to him out of pure spite. Walt has always been a man of strong emotion, but to see him unleash his vengeance upon a young man whose life he ruined, and who he is about to send off to his torture and death is beyond reprehensible. Walt can’t let go when somebody disrespects him, his pride his too strong, his insecurities too deep. It’s interesting, when I first heard of the “Mr. Chips into Scarface” pitch the show has been modeling itself after, I always assumed we would be seeing a slow purge of emotion from Walt. On the contrary, he is now consumed by his emotions, ruled by them even. His acts of stone-cold evil spawn not from indifference, but from burning, raging hatred and spite. He’s angry at the world for the life he’s been given and he set out to take his victory back from the world at the cost of the lives of everybody who stood in his path. He takes his pent up rage and self-hatred out on anybody foolish enough to question him, anybody who dare attempt to make him answer for his own atrocities. As I’ve said in weeks past, Walter White is pathetic, but even pathetic people can be monsters.
After pulling a bloody, sunburned and brutalized Jesse out of an underground cell, Todd reveals his true agenda: he intends to use Jesse as a means to up the quality of his lackluster meth, using Brock and Andrea as a motivator for Jesse. Aaron Paul has been given nothing to do but scream and cry for the past few episodes, but by God does it get more and more heart-wrenching every time. Listening to his sobs and cries for mercy when Todd came for him was heartbreaking, every time it seems like things can’t get worse for poor Jesse, they just do. Walter White’s horrific crimes wore Jesse down to a comatose husk, and when Jesse used his last card to fight back, Walter White broke him. I have no idea where this show is going to leave Jesse at the end, but I have the distinct feeling that there’s no hope left for him. I hope that I’m wrong.
In the final stretch of episode, “Ozymandias” breaks out the most intense and sequence in “Breaking Bad” history, even topping last week’s desert stand-off. When Skyler finally stands up to Walt, ordering him to leave their family alone while threatening him with a knife, Walt overestimates his control over her. Walt is used to having a psychological grip on those around him, threatening them into subservience, but when he tries to call his wife’s bluff, Skyler finally fights back. Lashing out at him with the knife, she manages to cut his hand and the brawl that ensues is absolutely terrifying. Walt and Skyler roll around the room fighting for control of the massive steak-knife while Walter Jr. screams at them to stop. The blade flings every which way as the fight gets further and further out of control, Rian Johnson’s direction here is perfect as the tension reaches stress-inducing levels. Luckily, nobody gets seriously injured after Junior dives in and wrestles his father away from his mother, and in an act of defiance, immediately calls the cops on a shocked Walter White. “We’re a family!” The formerly mighty Heisenberg screams at his wife and son just before realizing the irreversible extent of the damage he has done. His family is still afraid of him, no doubt, but he no longer controls them. The vice-grip of terror he held his wife hostage under has been lifted, and all he that is left for him to helplessly look upon is the shambles of the family he claimed to be helping. 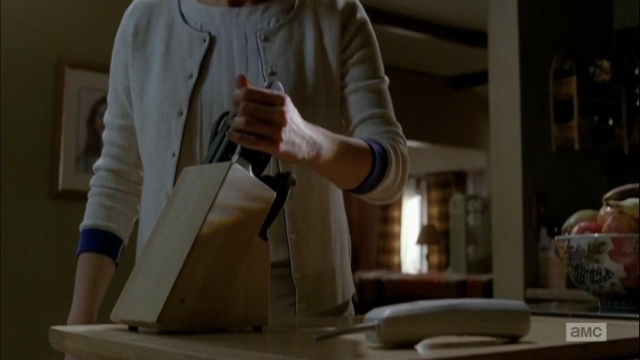 Walt, in his typical fashion, never concedes defeat, and he proceeds to abduct baby Holly from her crib and drive off with her while a helpless Skyler can do nothing but scream at him to come back. It doesn’t take Walter long to realize that he is completely incapable of caring for his own child (Holly’s innocent calls for her mother would melt a heart of stone), deciding instead to leave her at a fire station, but not before making one last phone call to Skyler. Though he finally takes ownership for his crimes so that all can hear, Walt unleashes his rage yet again upon his wife. Berating her for not listening to him, for not trusting him, for doubting him and his actions. Insults pour from his mouth like venom. Though he saves his family from prosecution by taking responsibility for his “business”, he can never bring himself to confess the true horror of what he has done to anybody. Even while he weeps uncontrollably, he can never bring himself to just confess and give himself up. Far be it from Walter White to lose to anybody, far be it from Walter White to show a moment’s weakness.
And so, Walter White; his family, his money and his empire gone, finally makes the phone call that will start his life over. Taking the step that Jesse almost made not three episodes ago, Walter steps into the unassuming van that will take him far away from Albuquerque.
“Ozymandias” is, without question, the most horrifying and heartbreaking episode of a horrifying and heartbreaking television series. Walter White world has finally collapsed around him, as it inevitably would, and everybody unfortunate enough to be associated with him gets caught in the crossfire. The idea that Walt will ever be legitimately redeemed seems like an impossibility at this point. No matter how honest he has become about himself, no matter how deeply he recognizes the evil he has spread, he will never admit it to anybody but himself. He has locked himself in a cage of his own making, a cage constructed from his pride and his ambition. No matter how deep his own failure, he can never admit that to the world that he despises. He can never concede his loss in the face of the universe that humiliates him.
“Ozymandias” takes it’s name from a poem by Percy Shelley about the collapse of empires, and the futility of ambition. It’s about the truth that nothing, no matter how magnificent or grandiose, will ever avoid being swept away by time. And in light of the events of this episode, it would appear that the Walter White takes the role of both the narrator and Ozymandias himself, as he gets a front-row seat to the narrative his own catastrophic downfall.
The final shot shows the mysterious van, Walt inside it, driving off into the sunset. It leaves behind nothing but a quiet street, with nobody in it aside from one mangy looking dog running across the frame. The stillness of it stands in stark contrast to the extremity of the scenes directly preceding it. So much emptiness, so much nothingness.
“Boundless and bare, the lone and level sands stretch far away.”
Grade: A+
Credit goes to Heisenberg Chronicles on Tumblr for that phenomenal episode poster. I intend to showcase their work for these last two episodes as well.