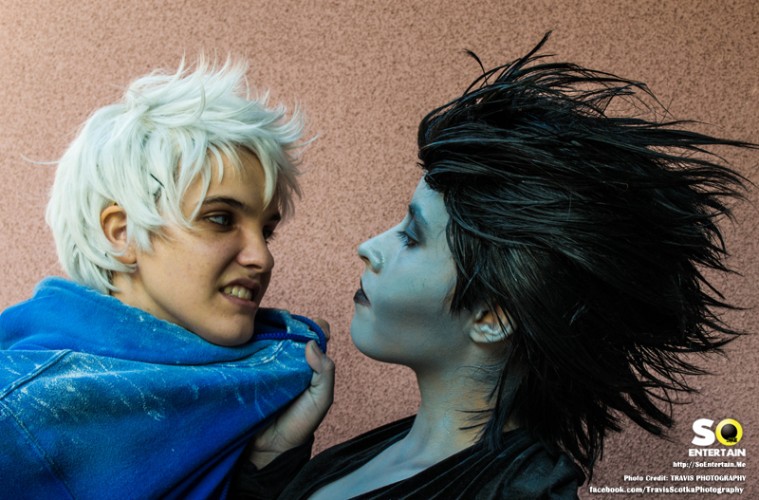 TABATHA’S COSPLAY SPECTACULAR: Winter is Here. Are You Ready?

Winter officially started December 21st and it couldn’t wait to get here. In fact, before the official start, it had already hit icy temperatures and made a winter wonderland out of the eastern part of the United States. Just last year, temperatures were so mild, I don’t think I put my winter coat on all but twice. I don’t know about you guys, but nothing puts me in the holiday spirit like crisp, cold air and snow fall. There is something whimsical about fluffy snowflakes gently falling out of the sky and the quiet calmness of the outdoors as everyone takes shelter inside. I’m not here to talk about the weather though, I’m here to bring you cosplay and for this month’s spectacular, I bring you the best of winter themed cosplay. For all my winter lovers out there, this one’s for you.

For this segment, I am going to highlight a few of the characters that best portray the season. Starting off with the Ice Queen (above), from the Cartoon Network series Adventure Time. This character is normally portrayed as a man, the Ice King, who is the steady antagonist of the series. In a couple of episodes, they reversed the genders of all the characters, hence Ice Queen was born. This particular Ice Queen cosplay is very well done, need I mention the eyebrows? This photo definitely makes me feel cold.
Here is another Ice Queen, this time we have a nice profile;

photo of NintendoFanGirl on deviantart

A little reminiscent of Princess Peach don’t you think? The hair on this one is gorgeous and just completes the whole look. There was mention of honing better photoshop skills for the background, but in all actuality, it looks just like the ice castle they live in. I certainly approve the way it looks as it stands.

And before we move on to the next set, we can’t forget the original; Ice King.

Ice King in the attire of his former self, Simon Petrikov. Cosplayed by kill3rtcell, photo by nahashon

Along with Ice Queen, Ice King is named as such, because of his ability to manipulate ice for use as a weapon. They both also live in a castle of ice in a cold part of Ooo. <- Not an error, this is actually the name of the land in which they live.

Simon Petrikov was Ice King before he acquired the crown that turned him into the villain he became in the series. Not much is revealed about his past, but it’s just enough to learn that he was a smart, eager, caring, normal human. In fact, the following picture illustrates just how human he was before the crown. This photo is not only the best Simon photo there is in my opinion, but one of the best cosplay photos out there. Not only are the cosplayers depicted in the photo spot on with their costumes and accessories, they are spot on creating this scene from the cartoon. There is so much emotion in this photo from the expressions down to the poses that it doesn’t seem posed at all. It feels real. They have successfully brought these characters to life by conveying a sadness that can be felt. This was just a great job by the cosplayers and the photographer for catching this perfectly.

Moving right along *sniffle*, who brings us the snow in the first place? Well Jack Frost does of course! If you’ve seen Rise of the Guardians, then this version of Frost should be recognized immediately thanks to the cosplayers who did a fantastic job at bringing him to life.

Yes, this was shot barefoot in the snow. Jack can manage to keep his composure though, after all, sub zero is just comfortable for him. The frosty detail around these photographs add a magical touch that is just right for the movie’s version of Jack Frost. The second picture shows just how comfortable he is in his icy element.
If you have any comments or questions for this cosplayer, please leave them on his deviantart page or on tumblr  by selecting “cosplay info” on any of the photos. There are dozens of photos from this set worth checking out.

This photo was one of many shot from this set in -15 degrees Celsius temperatures, (which is 5 degrees Fahrenheit for those that don’t remember the conversion.) I love the soft look of this picture and what’s unique about this Frost is that hair is real!

Above we have Jack Frost in the clutches of Pitch Black, the villain from Rise of the Guardians
And below, my favorite of the Frosts;

Not only is this my favorite one of the bunch, this also happens to be her favorite of the shoot. Yes, HER. This photo perfectly depicts the essence of Rise’s Jack Frost. Playful and carefree, an “accidental” shot with just the right smile to make this just perfect.

There is one more character from Rise of the Guardians that deserves to be on this list and it’s the one who keeps a couple of lists himself, St. North! (Bka St.Nick, Santa Claus) After all, winter in these parts means that Santa is coming, and we all want to be on his “nice” list. Even though Christmas has since passed, I’m trying to make good for that list in 2014.

Loving North’s attire here. Even the expression is down right. Alongside a Frost with the same legitimacy as St.North, this is a great cosplay pair. Not only in the cosplay world, but for the winter season.
Below is the same North, solo.

And here, St.North and Jack Frost Frost are preparing to battle Pitch Black and his shadow creatures.

Another one with the look down, is cosplayer Ryogatsu, from Colima, Mexico, seen below.

He says the hardest part of making the costume was the beard. He made the beard! The belt has nice detail akin to the movie and who doesn’t get a kick out of the tattoos? My favorite detail of North’s.

The last North for this group is saved for someone most believably North.

This St. North is jolly and tough! The beard is real, the belly is real, and he’s just old enough to be believable. Just goes to show that anyone can cosplay. I particularly appreciate those who cosplay according to their own look. When you play on your own looks, that’s when you can showcase the most realistic version of a character.

The last cosplay I am featuring on this winter special is none other than Shiva, from the Final Fantasy epic. One of my all time favorite summon-able aids (Odin being the other). As deadly as she is beautiful, her elemental power of ice and frosty blue skin has made her an obvious and undeniable choice to complete this list.

Shiva has been in every Final Fantasy game from Final Fantasy III through Final Fantasy XIII.
“The empress of ice, wreathed in frost. She is known for her signature move, “Diamond Dust”, which freezes everything in an instant.”—Dissidia Final Fantasy Summon Compendium

Nothing more “chilling” than that.
The photos above are all of Yurai of Yurai-cosplay, formerly uchiha-yurai. This version of Shiva is from Final Fantasy X, which seems to be the most popular version of Shiva to cosplay. Speaking of popular, Yurai’s Shiva has been featured on many blogs and websites. She is not hard to find when looking up this character. The photos were taken at the 17th Annual Manga Fair in Barcelona, Spain, by Hidrico (deviantart).
Below, she is being summoned by Yuna, one of the main characters of Final Fantasy X.

Just look at the details….

She is magnificent. Everything Shiva should be. I have created at least 2 characters of my own to cosplay that were inspired by Shiva. I even started to make the pieces for the Final Fantasy X version to cosplay myself and ended up turning it into an “inspired” costume instead. This is a lot of work. Have you seen the hair? As a cosplayer, I can’t even IMAGINE how to get that to work, nonetheless where to start. She is a character I have always wanted to do but that wig alone is discouraging. You can’t just go out and buy something like that. It has to be made. So I have to give it to this cosplayer. Not only did she conquer the wig and make it look legit, she nailed the whole thing. Hands down the best I have seen.

You see the toenails on this Shiva? She has the TOENAILS. It’s all about the details.

And finally we have the very beautiful UrbanBallerinaEsq of deviantart’s verison.

Bonus points for body painting. I have done many costumes where body paint was used and that alone takes hours to apply. That’s just a solid coat. Adding details to the paint takes even more time. The most practical route to take is choosing a body suit, like most do. You don’t have to worry about paint coming off and coverage. But you run the risk of masking any hard work you put into accessories, detailing, etc., by a cheap looking “suit”. There are some that are not so obvious and actually work well, as the previous Shivas have shown, but not everyone’s so lucky. I have always chosen paint over suit, so kudos to UrbanBallerinaEsq and all you others out there that go the extra mile for a result that may only last an hour.

That wraps up this month’s winter inspired cosplay spectacular. I will leave you with a collage of characters all of this month’s featured cosplayers have portrayed so you can see just how good they really are. Until next time, enjoy all that snow Jack Frost has provided, cherish the gifts St.North has given you, be careful of the ice the king and queen have placed in your path and appreciate the beauty of Shiva’s winter wonderland. Just enjoy winter folks, it’s not here forever. Happy 2014 everyone!