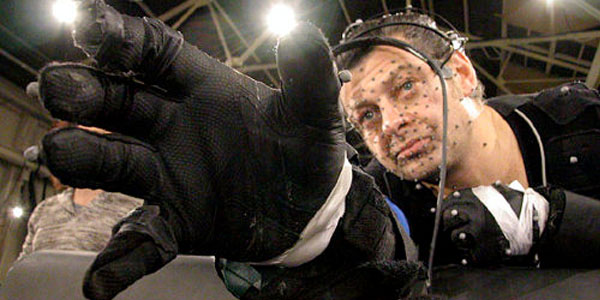 In this feature I’ve tried to at least touch upon the more controversial “holes” in the Academy Awards categories.  We’ve discussed the technical brilliance of stunt coordination and we’ve talked about the artistry of fight choreography.  However, much like the entire action genre, this next hypothetical award goes to a style that is often overlooked in a certain category.  Our next pick for Oscar A Go Go is in the category of performance.

Best Performance by an Actor a Leading Role – Andy Serkis: Rise of the Planet of the Apes

It feels almost like cheating to bring up this situation because of the vast number of think pieces that were written about this exact role just two years ago.  In fact, a similar debate has popped up again this year as people discuss Scarlett Johansson’s nuanced voice-only performance in the film Her.

I understand the reticence to give a statue to someone who does not actually appear on camera.  What makes Rise of the Planet of the Apes an especially egregious oversight is that Andy Serkis started this entire debate nine years earlier with his performance as Gollum in The Lord of the Rings: The Two Towers.  One would think that “Hey, we’re talking about this guy AGAIN” would be the impetus for a serious consideration of changing the rules.

But let’s take a step back… what is so good about Serkis’ performance as Caesar in Rise of the Planet of the Apes that it should be nominated for an Oscar?   Moreover, is it so good that we should start breaking rules left and right?  Well let’s take another step back… what’s the purpose of the role?  Beyond being an action movie, Rise of the Planet of the Apes is a character study.  Caesar is introduced to the audience at birth and experiences an incredibly significant character arc.  In a turn reminiscent of Flowers of Algernon, the audience gets to witness an impressively dramatic change occur at a surprisingly gradual pace.  By immersing himself fully into the role, Serkis pulls this off with flying colors.

We have all watched some beautiful and touching Pixar movies, but none has replicated the emotional closeness quite as much as a real actor on the screen feeling emotions.  The water in Finding Nemo sometimes looks practically like actual water, but no character has enough points of articulation that define a human face.  Caesar is different though.  He’s expressive, interesting, engaging, and vaguely terrifying all at the same time.  So why wasn’t this a groundbreaking performance that incited the Academy of Motion Picture Arts and Science to overlook some kind of stodgy rules?  Let’s look a little deeper…

First barrier to Andy Serkis’ nomination/win: He’s not on screen

Fun fact: he is!  Because of the extensiveness of the role, WETA actually pared down the mocap gear and had him act live on set with James Franco and team.  Really all you’re seeing is a layer of visual effects over an actual performance. The voice, movement, and emotion of Andy Serkis are all up there on the screen.

Second barrier to the statue: No precedent

Is Caesar’s visual effects textured “mask” that much different than the make-up covered nomination of John Hurt in The Elephant Man or Marin Landau’s win in Ed Wood?  It’s a performance that’s enhanced by props or effects.  In a world where they can animate a CG tear onto Jennifer Connelly’s face (Blood Diamond) the line becomes more blurred.  Let’s say you’re scared of awarding a somewhat “gimmicky” performance.  Well that’s strange because Jean Dujardin was given an award for starring in a silent film the same year that Andy Serkis should have been at least nominated.

Speaking of Jean Dujardin, let’s look at the other actors nominated that year. The aforementioned Jean Dujardin is a blast, but his role is seemingly more limited than Serkis’.  Demian Bichir gets a deserved, but doomed from the start nomination for the barely seen A Better Life.  George Clooney does a wonderful job of playing slightly morose George Clooney in The Descendants.  Brad Pitt gives a strong performance in a barely challenging role.  Gary Oldman was the only real standout performance for the ages… besides, of course, Andy Serkis in Rise of the Planet of the Apes.

Fourth (and last) barrier: Dude isn’t even playing a human.

I think this point, which would seemingly influence a lot of voters is actually one of the strongest reasons FOR Serkis to have gotten some recognition.  Rise of the Planet of the Apes is a prequel, meaning that the audience brings in loads of baggage watching it.  Case in point: the protagonist is the leader of a rebellion against the human race.  It seems like it would be hard for whatever actor is playing this protagonist to elicit empathy, but we end up with one of the most heart-wrenching films of the year as a result.  All of this was pulled off through a non-human filter.  This was not just a compassionate performance, but an anthropological study of chimpanzee behavior and movement.  In the grand tradition of Glenn Close, Jaye Davidson, Dustin Hoffman, and Linda Hunt (and arguably ALL acting) Serkis played something he truly was not.  And despite this, the audience connected to Caesar’s story.

In more “Action A Go Go” terms, the fun part of the film really doesn’t really occur until over an hour into the film when the apes are attacking humans by the dozen.  But somehow Andy Serkis imbued his character with an immense humanity that allowed us, as an audience, to cheer along to the demise of humans.  While Avatar did something similar, it also had…

1. Human surrogates fighting on the side of the non-humans.

2. Characters that were less fleshed out… the action scenes were about  spectacle as opposed to the emotional fulfillment that Rise of the Planet of the Apes pulled off.

Andy Serkis’ performance single-handedly provided the emotional connection that made the climax of the film enjoyable instead of disturbing.  Seriously, it’s about a bunch of animals attacking (somewhat) innocent humans, and people loved it as a result.

And who knows… if Serkis had been recognized, than maybe that would have opened up the door for Vin Diesel to end up with a miniature gold version of himself after he plays Groot in the upcoming Guardians of the Galaxy.

Enjoy the Oscars this coming Sunday!