The End of an Arc – Three

As I finished issue #5 of Kieron Gillen, Ryan Kelly, and Jordie Bellaire’s fascinating inversion of the story of the Battle of Thermopylae, I was downright flabbergasted and nearly threw down the book in surprise.  Was there a thrilling cliffhanger?  A shocking ending to the 5-issue arc?  No, I just never realized this was a 5-issue miniseries.  As much as the end of this small-scale story of three Helots on the run from Spartan forces leaves you wanting more, the 5-issues still felt economically correct and complete.  That doesn’t mean you have to like that it’s over.

The timing of this issue’s release (ten days before the release of 300: Rise of an Empire) couldn’t have been more perfect.  Despite being nearly as badass as the original Frank Miller/Lynn Varley comic and the resulting Zack Snyder movie, the book attempts to dismantle the over-embellished Spartan Mirage.  Even in the first issue’s afterword, Kieron Gillen claims to have been re-reading the seminal graphic novel and suddenly told a Spartan character to “F*ck off!” outloud.  The wild, jingoistic tale of Spartan nobility and disdain for slavery is undercut, argues Gillen, by events like the Crypteia where Helots (read: slaves) could be killed without repercussion. 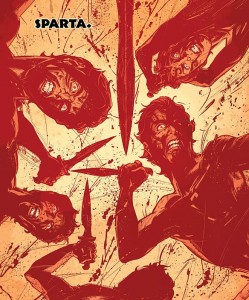 Set nearly 120 years after the famous battle against the Persians, Gillen’s story highlights the ending days of Sparta’s heyday.  The Spartan city-state is decreasing in population while infighting is undermining their previously strong cultural values.  A gang of power-mad Spartans attack and decimate a Helot village only to be gorily defeated by three lone Helot survivors: Terpander, the quick-witted storyteller; Damar, the headstrong widow, and Klaros, the butcher with a mysterious past.  The gang of three flees retribution in the countryside only to be pursued by three hundred Spartans in an attempt to quell any talk of Helot rebellion throughout Greece.

As discussed, the story flows quickly and the audience learns early to empathize with the slaves being chased through the countryside.  Many of the things we know about Sparta from popular culture is turned on its head throughout.  The single-minded adherence to tradition is flouted several times by high-ranking members of Spartan government.  The “survival of the fittest” aspect of Spartan children is criticized in the ruthless massacre of the fittest Helots by the Spartans for fear of rebellion.  The myth itself is explicitly mirrored with several paraphrases (“Come, any who would dine in Hades”), the number 300, the focus on a bloody defensive battle, and the importance of a secret goat path. 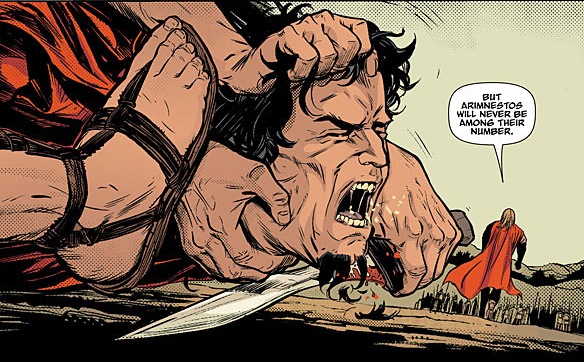 While attempting to challenge popular thinking, the book is also a hell of a lot of fun. With slightly exaggerated linework, Ryan Kelly’s art creates a dense image in even the barest of drawings.  While not quite as transcendent as Frank Miller’s gorgeous pencils in 300, the art has a great sense of anatomy and action that creates an incredibly dynamic image on page.  Despite being of a somewhat similar palette, Bellaire’s colors are brighter than Varley’s giving the book a less gritty feel.  This evokes an everyday reality, while still preserving the comic book nature of Kelly’s art.

I would recommend people seek out the single issues due to the fascinating conversations in the back of each issue with Professor Stephen Hodkinson of the University of Nottingham (unless, of course, they decide to print these in whatever forthcoming collection turns up).  The discussions add an incredible amount of background to the story as well as some simply fun facts and further reading for anyone interested in the history.  History is rarely black and white, so they are sure to point out inconsistencies in current anthropological, archaeological, and historical interpretive thinking.  Finding out what facts and theories Gillen chose to use/exclude, highlight/debunk, heed/ignore, gives great insight to the storytelling process.  More importantly, the depth of known and unknown information on Sparta fleshes out the story so much you’ll want to read the comic again immediately using the stronger context. 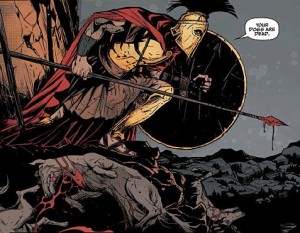 The violence in the book is presented in a matter-of-fact way that climaxes in the 5th issue.  Each of our heroes uses one of their “strengths” to hold off the attacking Spartan army in their own unique way and stage their own personal rebellion.  As Damar says in issue #3, “You could set Sparta aflame and dance on the corpses and it wouldn’t alter anything that has been done to us.  The only revenge is living.”  Since this story takes place during the death throes of the once great Sparta, it couldn’t be more true.  The ending of 300 points out that the real victory of Thermopylae was the Spartans’ place in both stories and history.  Three ends with the hope that a more detailed understanding of the subjugated Helots will help them live on as well.  After all, those 300 Spartans may have held shields in their phalanx position, but the afterword of issue #1 posits that there were 300 Helots that carried the shields to the battle.  They all died as well, so this totally cool comic is a successful attempt at similarly honoring their sacrifice.

All images courtesy of Image Comics by way of Comic Book Resources.