Change doesn’t start with a hashtag that’ll be forgotten by the next PPV.

Similar to Vince McMahon, I try to stay out of touch with the WWE Universe because I’ve found little incenitive to do otherwise. However, if you’ve been anywhere near Twitter in the last two-and-half months —  or a news outlet as desperate for mainstream attention as the WWE Network —  you might find salvos exchanged between the WWE Universe and that promotion up north. Those who have been watching wrestling (AAA, ROH, NJPW, Lucha Underground etc.) may be unaware of what’s going on in the world of sports entertainment, but #GiveDivasAChance is the newest in a long-line of hashtags that serves as “protest” to what fans believe is an unacceptable use of female talent. The thought is that WWE Divas should be given more air-time and more opportunities just like the other wrestlers.

Now, I could go into the fact that WWE superstars aren’t technically wrestlers according to WWE, I could also address the fact that most Divas are actresses and models rather than trained wrestlers, and I could also go into the fact that Total Divas gives the Divas just as much air-time as the men albeit in a different format. I could even address the fact that when the Divas division first got started it was WWE themselves who positioned it on a lofty marketing campaign that advertised it as RAW’s “hotter” and “sexier” alternative to SmackDown’s division which had actual female wrestlers such as Jazz, Beth Phoenix, Victoria, and so forth. I could go into all these things if I felt the WWE Universe would actually care about #GiveDivasAChance after Wrestlemania, or even if they care about it by the time this is posted. It is my opinion that the greater issue here is that #GiveDivasAChance is less a step in the right direction and yet another bullet point in the long-history of hashtag activism which ultimately won’t lead to anything.

I’ve spoken to many WWE fans who are tired of the product for one reason or another whether it’s Cena being the face of WWE (despite the fact Cena has taken a step back and has been putting over other superstars), or maybe they’re tired of Roman Reigns being shoved down their throats (despite the fact that it was the fans who wanted WWE to push Roman Reigns), or simply WWE Network not living up to expectations (although this hasn’t stopped the fans from paying for it each month). I’ve talked to a lot of fans dissatisfied with the product and while many want change I may have talked to only two who are willing to work for it. Whether it’s #PushZackRyder, #PushDolphZiggler, #CancelWWENetwork, or #GiveDivasAChance the WWE Universe gets a lot of exercise out of hashtags but that’s about as far as the fight for change ever goes. Seeing as how I haven’t seen Zack Ryder on television, or Dolph Ziggler with a title shot, or Divas putting on any matches longer than four minutes, it seems that WWE doesn’t listen to its fanbase, contrary to the tweet which clearly wasn’t sent by Vince McMahon.

This isn’t anything new because WWE hasn’t listened to its fans since the transition to the PG era, and while the universe thinks they’re shaking up the scene, #GiveDivasAChance has been a thing since 2010 and much like #Gamergate I don’t think it’s having the desired effect. Maybe it’s time to try a new gimmick. Maybe fans should put their money where their hashtag is.

To quote Kevin O’Leary “Money controls all things, everywhere, at everytime.” I point this out because the message money communicates is far more effective than any hashtag I’ve seen. It’s especially fitting because like most companies, as long as WWE is making money then in WWE’s eyes it’s doing just fine and has no need to change. And as long as fans continue to give WWE their money they’re giving WWE all socioeconomic power the fans themselves would normally have.

This isn’t a Marxist shoot because I don’t think that’s relevant in 2015, but it is a re-evaluation of the hashtag activism people seem to employ more readily than any actual activism. Maybe it’s due to the absence of a head on fence post, or the lack of anything resembling change but I’m pretty sure Robespierre would disagree with the assertion that the WWE Universe has started a revolution. 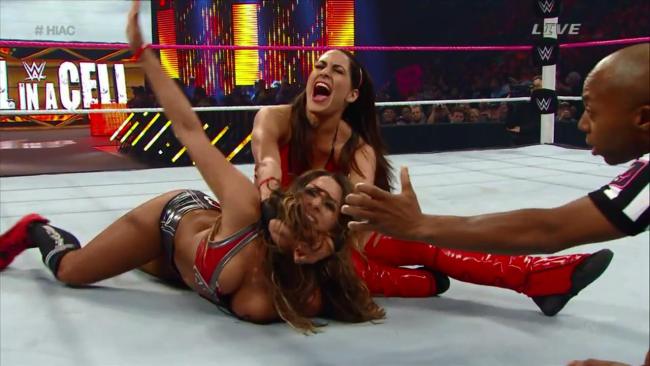 I won’t say “Given the track record of the WWE Universe I’m not positive.” I won’t even say “You’re talking loudly and saying nothing.” But wouldn’t it be a once in a lifetime event if change was built on something more tangible than 140 characters?

Matthew Whetstone is a writer, editor, and interviewer with a background in journalism. His diet includes old-school wrestling, anime, comics, and video games. Hard-boiled cynicism and a side of humor, you can check out his review blog at: jetstreamreviews.blogspot.com.