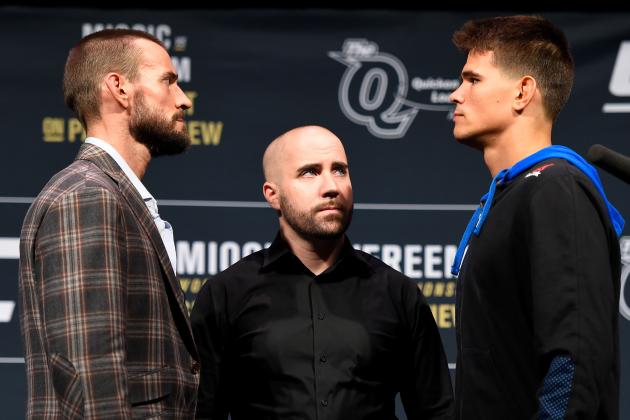 Your Arms Are Too Short to Box With Mortals, Let Alone God

This past Saturday night, former WWE Champion CM Punk made his much anticipated debut at UFC 203 at the Quicken Loans Arena in Cleveland, Ohio. After over two years of set backs and delays from dealing with nagging injuries, Punk faced off as a welterweight against Mickey Gall, an up and coming fighter who was in his second UFC bout.

As I expected, Punk lawst.

Not lost. Lawst. The type of loss so ugly that it causes you to make the ugly face.

Listen, I don’t have a problem with CM Punk. I enjoyed his run with (the Honorable) Paul Heyman, I enjoyed his pipe bomb and Money in the Bank 2011 was one of the most exciting and dramatic nights in recent wrestling history. There’s even a few promos of his from his independent days that give me a rousing chuckle when I feel down.

However, MMA is not something you dive into, especially not on such a big stage. I appreciate that Punk took a risk and went after something that he wanted to do, especially after the dramatic fashion in which he left the WWE and dropped dime on them on Colt Cabana’s podcast. I definitely don’t want to dash someone’s dreams and ambitions, but in this case, Punk should’ve started small, got some experience under his belt and then went towards the big leagues. Punk will be 38 years old next month though, so if he had went the get experience route, how much time would he have left to have a viable MMA career?

Punk took his loss in stride and gave an inspirational speech afterwards, so it wasn’t all a complete downer for him. He’ll dust himself off, regroup, give AJ another hug and learn from this experience. Who knows, he may win his next fight.

Next time though Punk, shake the guy’s hand.