When World Wrestling Entertainment owner Vince McMahon bought out his competition early in the last decade, a sharp decline in the quality of his promotion became evident. For this viewer, storylines became boring and predictable. Also, while plenty of wrestlers were good at working a crowd and shooting promos, only a few of them had what wrestling fans from my generation grew up loving: In-ring ability. The wrestling business has been a business for a long time where 10% of it or less pertains to athletic talent. It’s like the music business: You don’t need talent to be successful anymore, just a shrewd head for business is pretty much all that’s required.

Watching wrestling in the mid-1980’s through the early 2000’s, I knew that wrestling was fake and that performances were planned, but I was entertained by it nonetheless. For me, these wrestlers and the characters they portrayed were larger than life. With colorful costumes, elaborate face-paint, athletic prowess, and the gimmicks, it was male fantasy. In elementary school, I’d join my classmates during recess talking about the WWF (World Wrestling Federation, what the WWE was called until sometime in the last decade), our favorite wrestlers and even re-enact their moves on the playground. One highlight memory of mine as a fan came in the third grade. My father took me and a student of his from the school he worked at to a WWF house show in Landover, Maryland back in 1992. The venue was the now-defunct Capital Centre and the event took place a week before Wrestlemania VIII. The main event at the show was a 20-man battle royal. The main event held significance to me as a fan because the winner of that live battle royal was a performer who was, is and always will be my favorite pro-wrestler of all time: Randy Poffo b/k/a/ the “Macho Man” Randy Savage.

His raspy constipated voice, his intense character, his Pomp & Circumstance theme music and his dedication to giving excellent performances made him one of the most respected and loved wrestlers in the business. He was the wrestling equivalent of a method actor. For example, in 1987’s Wrestlemania III, he defended the WWF Intercontinental title against Ricky “The Dragon” Steamboat. Savage lost the title to Steamboat, but the match is near-universally regarded as the greatest wrestling match ever and an inspiration for future generations of pro-wrestlers. What made the match legendary was Savage’s insistence on practicing with his opponent for weeks before the event. He and Steamboat decided how they would perform and then practiced their moves in-ring at every opportunity. Savage was known throughout his career as a stickler for those kind of details and sought to bring out the best performances in both himself and his opponents. It was this drive that made the aforementioned match overshadow the main event Wrestlemania III. Even Hogan body slamming Andre the Giant can’t hold a candle to the Savage/Steamboat match.

Savage’s style as a wrestler was an intense combination of Bret Hart’s technical prowess and the aerial agility of a lucha libre wrestler. Though Hulk Hogan had been the face of the WWF for years and had been partnered with Savage once the latter won his first WWF heavyweight title, everyone both in and outside of the business respected the latter more. No matter what promotion he was in or even if he was a face or a heel, Savage always was a fan-favorite. He never participated in the politics of the business that much and that affected him to the point where Vince McMahon ignored him as a hall-of-fame inductee for over 20 years. The rumor was that Savage had an affair with Vince’s daughter, Stephanie, and decided to give him the stiff-arm from then on. Whatever the case is, McMahon has let go of his grudge and finally decided to give Randy Savage his just due. Although it’s a posthumous inclusion (Savage died of a heart attack in 2011), I’m very happy he’s being recognized. If McMahon wants to make this deal even sweeter, he should make Hulk Hogan induct him into the HoF. Given the well-known disdain Savage had for Hogan while he was alive, it’s fitting if only for the irony and as a humiliation tactic towards Hogan. 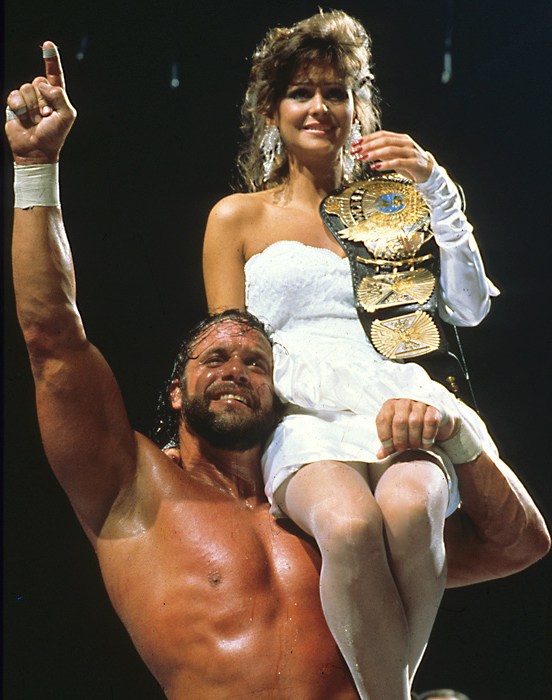 From Wrestlemania IV in 1988, his first WWF title win and an enduring image.

I didn’t intend to write five paragraphs on this. Hell, I stopped watching wrestling when I was 18 or 19-years-old. When I watch it now, it’s anything from the WWF Attitude Era and prior. But even at 31 years of age, the flying elbow drop, the cowboy hat (all of his costumes, actually), the female valets, the Slim Jim commercials, the “OOOOOOHHHHH YEAAAAHH!” catchphrase, intense rivalries and the manic character of Randy Savage still excite the fanboy within me. When I watch Wrestlemania IV and Wrestlemania VII, when he’d hoist his then-wife Ms. Elizabeth (also deceased) on his shoulder, it still brings tears of joy to my eyes (that reaction is elicited even now as I write this and think of those iconic images). As the first inductee into the 2015 WWE Hall of Fame, I don’t wish him to rest in peace. I now wish for him to Rest in Power, because he earned it long before he expired. Here’s to you, Macho Man, you were the best that ever did it.