Fudging the details of a review in the name of spin is nothing new when it comes to movie posters. However, Studio Canal got really inventive when it came to Guardian movie critic Benjamin Lee’s review of Legend.

Incredible way of making my two star review seem like I didn’t hate the film pic.twitter.com/zvOyIxHQ3h

Do you see it? How about a closer look? 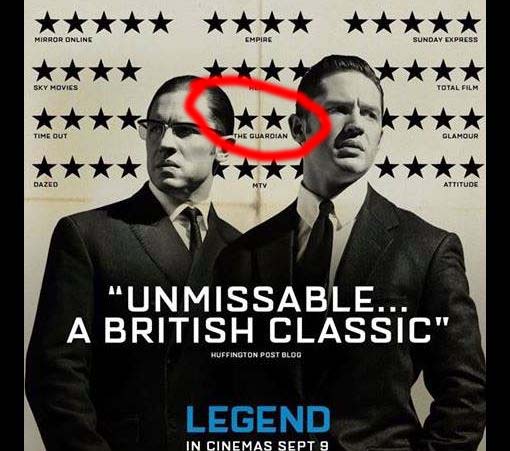 You gotta give them points for creativity.

Despite Lee calling Legend‘s marketing team out, we still have to admit that the movie looks pretty interesting. But hey…don’t take our word for it. Peep the trailer below. 11 out of 12 reviews can’t be wrong…right?

Legend, a crime-drama about the infamous Kray twins, hits UK cinemas today and US theaters in October.