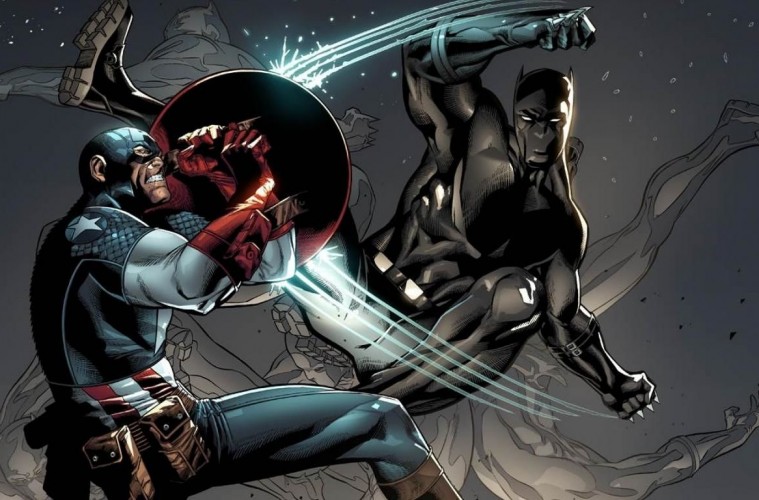 WHY THE BLACK PANTHER WILL SOON RULE THE MCU

EDITOR’S NOTE: This article originally appeared November 6, 2014 and is written by our very own Sy Shackleford. Due to recent dissatisfaction with Entertainment Weekly’s coverage of the Black Panther, this article has been republished to educate fools and children. Feel free to show this to the next person who mistakes T’Challa for a house cat. ‘Kay. Bye. -Troy 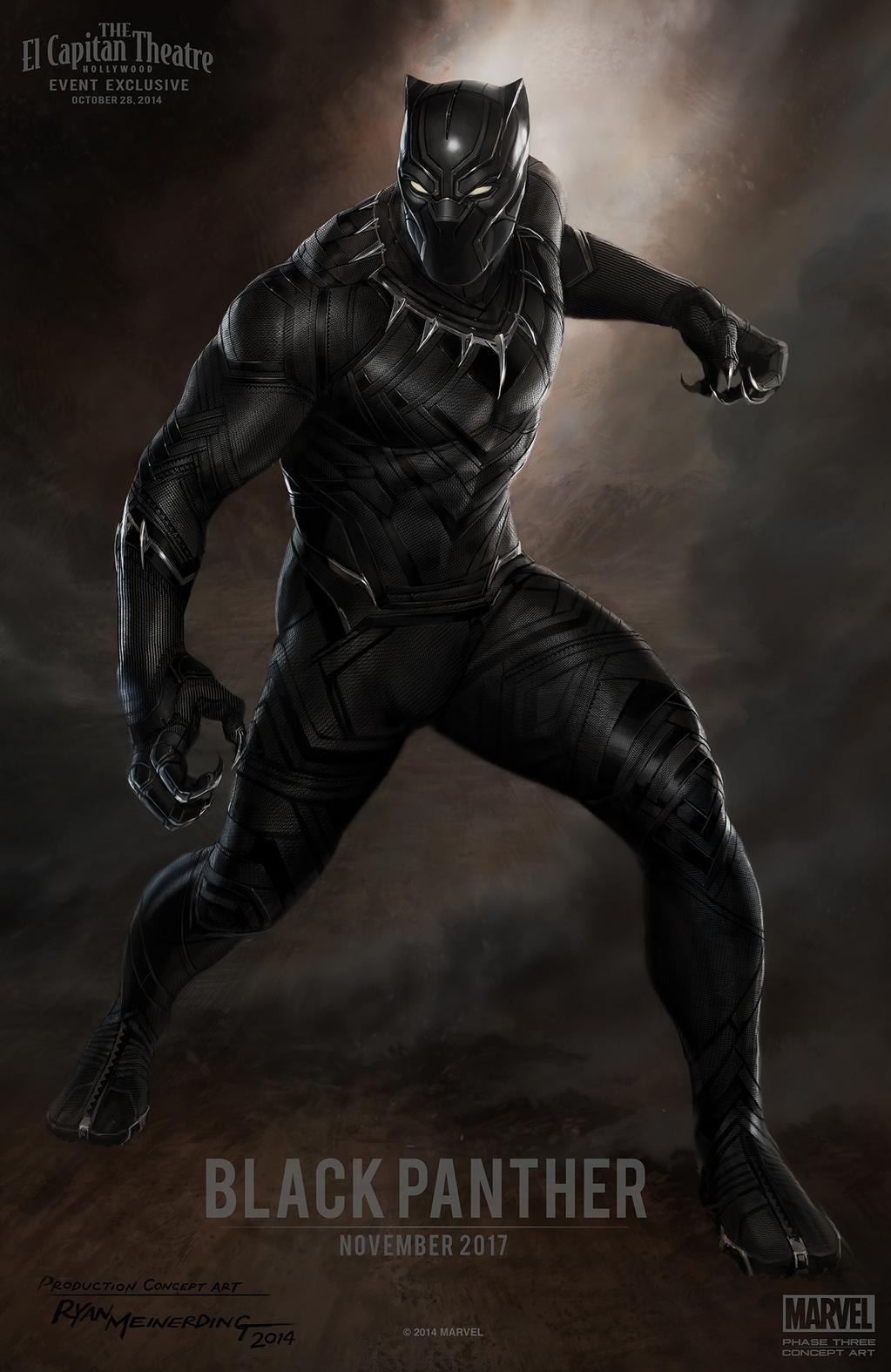 Now that Phase 3 is underway for the Marvel Cinematic Universe, I’ve decided to do some run-downs, from time-to-time, on some of the characters who’ll be making their big-screen debuts. Though they’re known within the comics, they’ll be household names after Marvel Studios is done with them. After all, look at Guardians of the Galaxy: All C or D-list characters that even 5-year-olds now are intimately familiar with. The first one up is the Black Panther.

The Black Panther was born T’Challa, monarch of the isolated African nation known as Wakanda. Orphaned at an early age with his mother dying in childbirth and later his father at the hands of Fantastic Four villain Klaw left T’Challa with a fierce aptitude for survival. Educated in Europe and the United States with a Ph.D. in physics, he underwent a series of ritual trials in his native homeland to assume the royal mantle of the Black Panther. Internationally known, he is a costumed crusader for justice abroad and a staunch protector of his people. 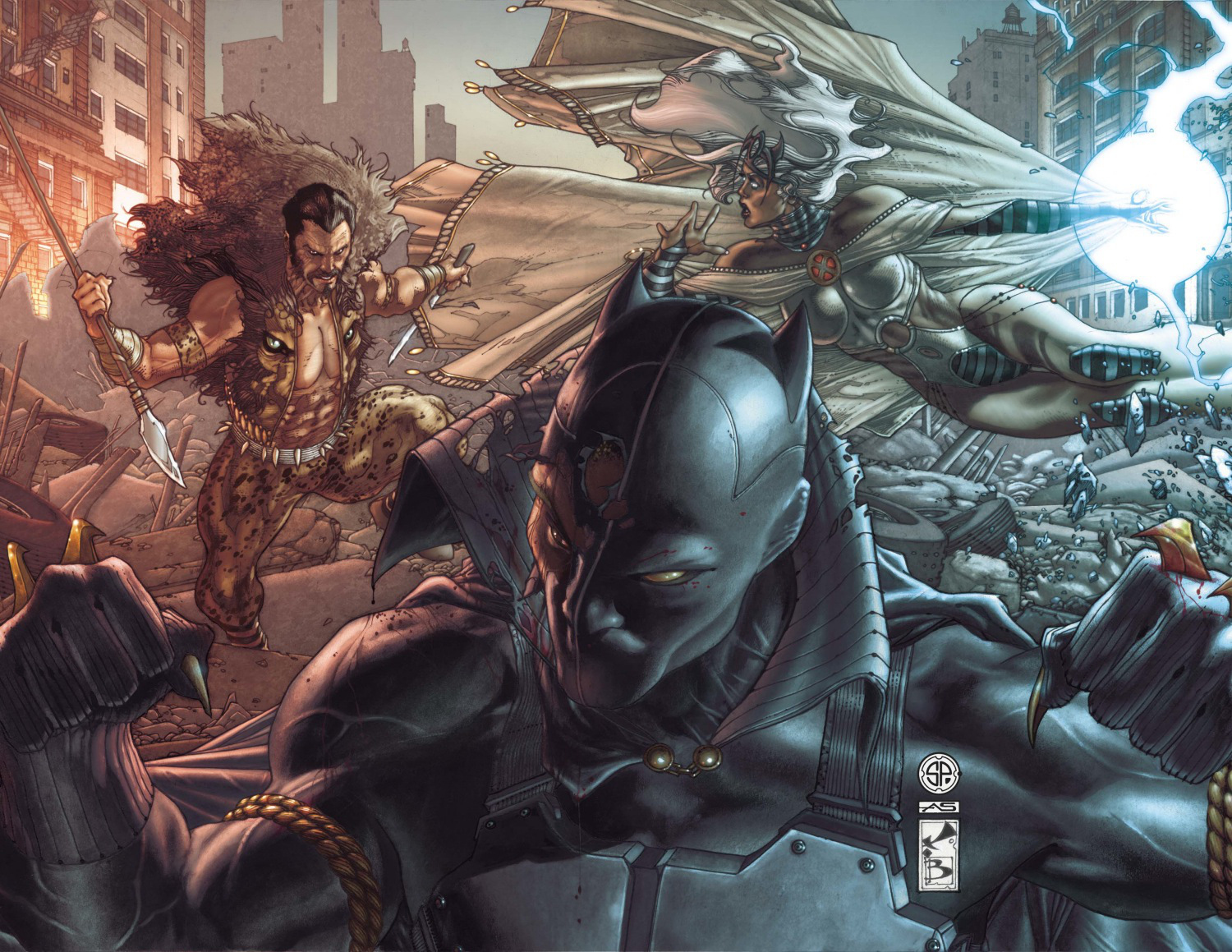 Created by Stan Lee and Jack Kirby, the character debuted in Fantastic Four (Vol. 1) #52, July 1966. The Black Panther is the first Black character in modern comics. He predates Black American characters such as Luke Cage, the Falcon and Storm from the X-Men. He’s ruler, patriot and protector of his small homeland and actively seeks out potential threats. His orphan status, wealth, extensive education, physical prowess and costumed identity all draw parallels to DC’s Batman. His cynicism is a close second: He once invited the Fantastic Four to his homeland and engaged them in combat just to see if they’d be a threat to Wakanda. He also initially joined the Avengers ostensibly to replace Captain America, but to spy from within to, again, determine if they posed a credible threat. He ended up becoming a full-time member of the group and one of their most valuable members. 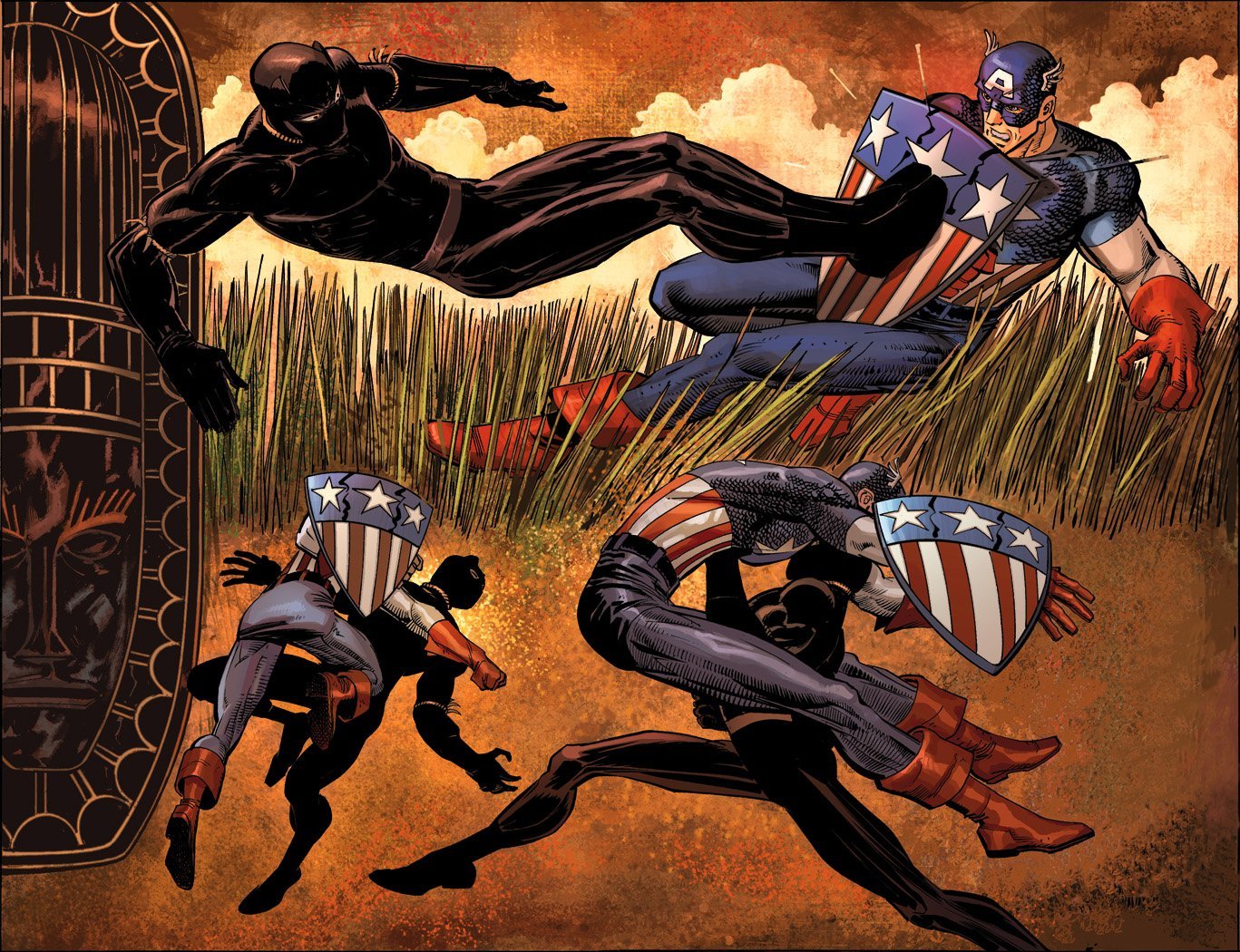 After completing a set of trials, T’Challa was crowned king of Wakanda and assumed the chieftain title of the Black Panther. He ingested a heart-shaped herb that grows only in the wild jungles of Wakanda. The combination of the herb along with a certain mystical connection with the Wakandan Panther God granted T’Challa  peak-human levels of strength, speed, agility, endurance, reflexes, vision, hearing, and smell from the herbs. He particularly has excellent night vision and the ability to detect and sort thousands of different odors, identifying and tracking a man by his scent. For a brief period of time, T’Challa developed ESP abilities allowing him to read thoughts, sense people and objects in his immediate vicinity, and predict the future to a limited degree. These abilities were quickly forgotten about, and he relied on little more than his physical skills until recent times.

His panther costume is woven out of Wakandan Vibranium (an extraterrestrial metal responsive to sonic vibrations) coupled with unstable molecules (artificial nuclei responsive to nearby energized matter), causing it to absorb and displace kinetic impact and vibration on contact to protect him from injury. His boot soles are forged from a more solid form of Vibranium, enabling him to run across water or straight up vertical inclines for short distances. They also generate a vibrational force field that increases the impact behind his kicks by reflecting vibrational force towards his target, and the force field is occasionally useful for protection as well. His costume is equipped with a cape that can be adjusted anywhere from full length to non-existent, and the entire costume can be transformed into a three-piece black business suit. These changes are accomplished by mild vibrational surges triggered by his Kimoyo card. The size and shape of a credit card, the Kimoyo is actually a tiny computer with vast processing capabilities, and linked to a technological base under Wakanda to increase its capacity even further. It can be used for communication purposes, can summon up vast amounts of detailed data on any number of subjects, override electronic locks remotely, perform wide-spectrum sensory scans, etc. The Panther carries an ornately carved knife handle capable of producing phased energy daggers. These energy blades can be used for close-quarters combat or fired as projectile shots. By modifying the intensity of the energy surge, Panther can kill a man instantly or merely mark him with a residual trace of energy, which the Kimoyo card can pick up and thus track. Finally, he has retractable claws on his costume comprised of a variation of Savage Land Vibranium, the “anti-metal”. Generally, “anti-metal” radiates vibrations that liquefy any nearby metal objects. T’Challa has refined the substance so that his claws only break down metal on contact.

His mystical connection with the Panther God made T’Challa champion of the dead, and king of the Wakandan necropolis and Panther Pavilion where the spirits of all former Black Panthers reside. In addition to his enhanced physical capabilities, he now possesses conscious awareness of the knowledge, memories and wisdom of past Black Panthers through the necropolis. T’Challa is also a  skilled tactician, strategist, scientist, tracker, and unarmed combatant.

In recent years, he married Storm and together they ruled Wakanda as king and queen. Following the destruction of Wakanda due to the Avengers vs. X-Men debacle, he had their marriage annulled. 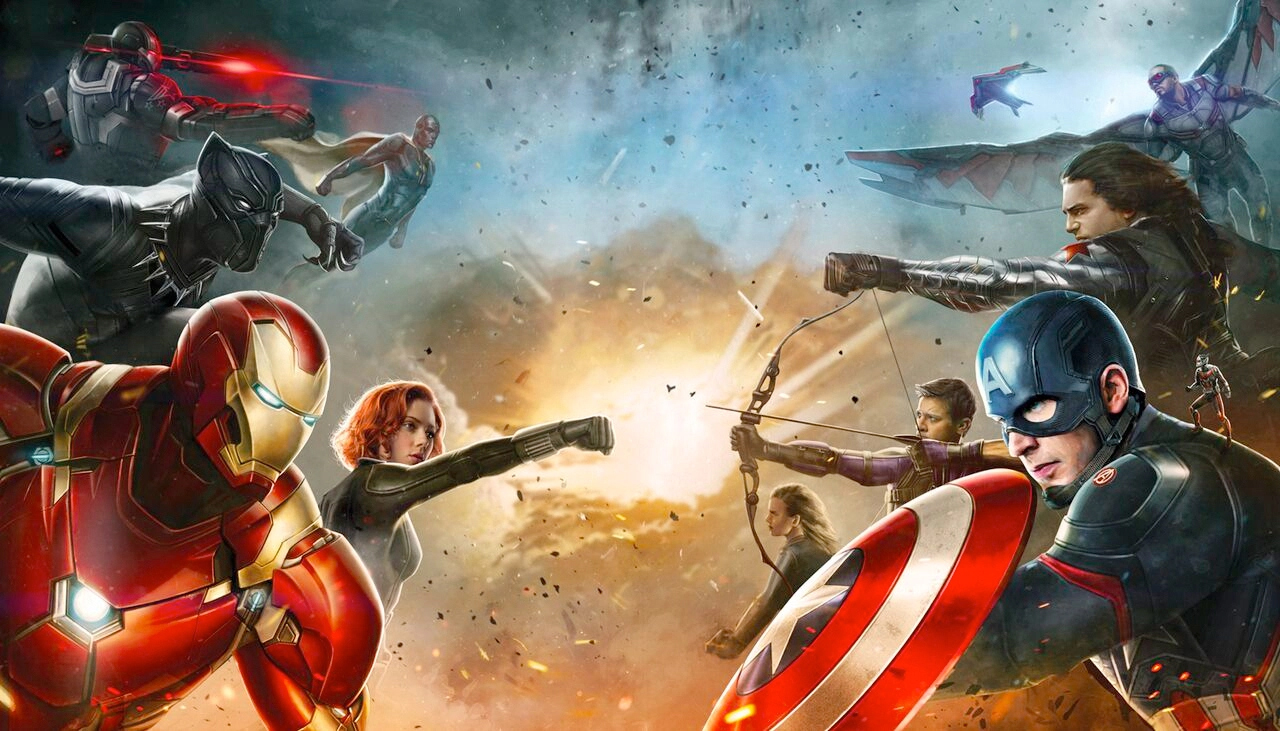 Actor Chadwick Boseman has been confirmed to portray the Black Panther and will debut in the third Captain America film installment which is set to be released in 2016. The character will have his own feature film the following year. So far, Marvel Studios has had one Black superhero on-screen: The Falcon. Considering the films listed for Phase 3, it’s highly likely that he’ll be part of the Avengers film roster in the years to come. Also, given the current events in America’s racial climate, it’s easy to assume that White America will be perplexed and polarized by a comic-book film adaptation that has the word “Black” as part of its title, character and actor. However, given the track record of Marvel Studios in having never released a bad film, I’m looking forward to the Panther’s on-screen debut and to his niche being carved out in the Marvel Cinematic Universe.