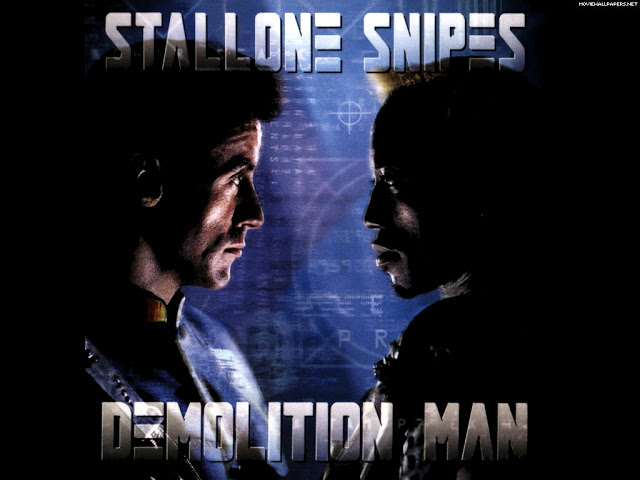 When people review the long and illustrious career of Sylvester Stallone there are always highlights. Rocky (1976), of course, is a triumph of his. Then the sequels to rocky, closely followed by the action movies that have been the bedrock of his career ever since. First Blood (1982), then Rambo: First Blood Part 2:  (1985) , then movies like Cobra (1986). After this point action movies set in the present day dominate his roster of films. Until you get to a special film called Demolition Man, a sci-fi film that plays against everything Stallone has done up until this point. 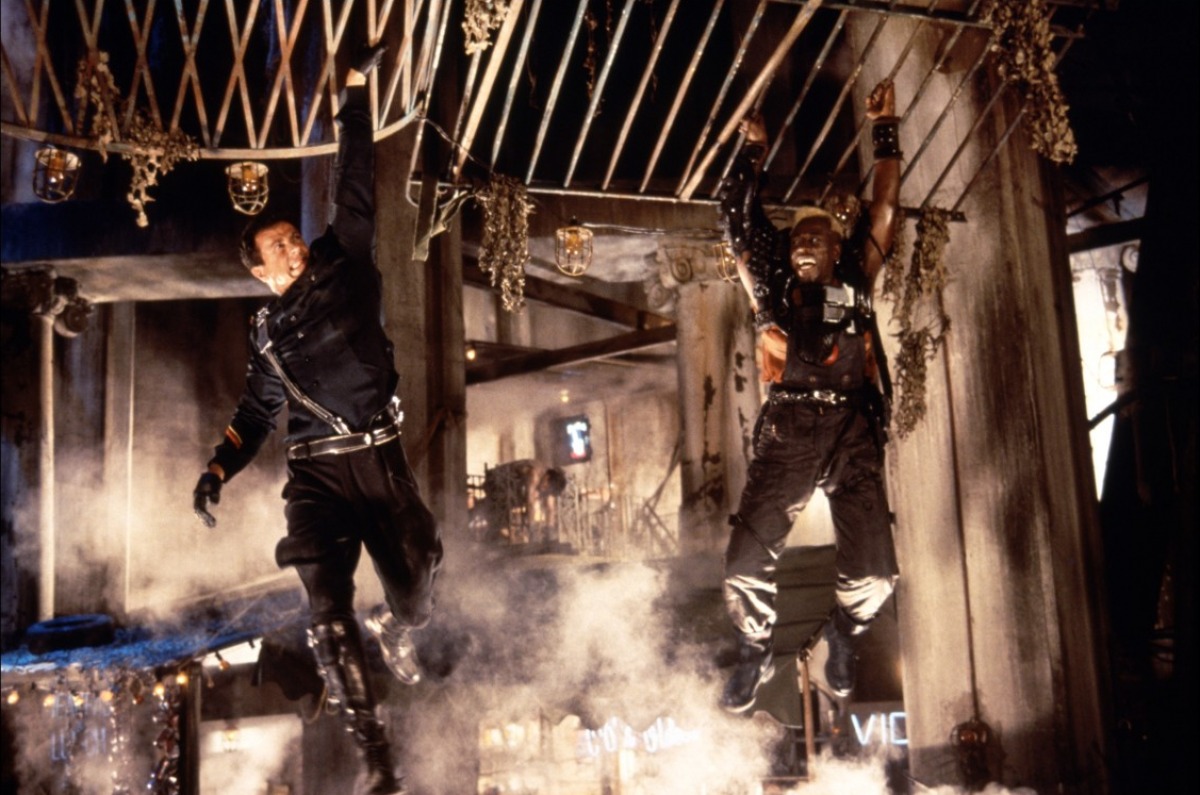 For the uninitiated, Demolition Man is about John Spartan (Sylvester Stallone), a cop from apocalyptic 1996 Los Angeles who gets framed for the incineration of a bus full of hostages after capturing the cities most psychotic criminal, Simon Phoenix (played by Wesley Snipes). Both get cryogenically frozen as punishment for their crimes. In the year 2032, Phoenix is thawed out of his popsicle state and is let loose on a utopian San Angeles, a city that rose from the ashes of Los Angeles after it was devastated by an earthquake in 2010. From the ashes rises a city populated by people who have little if any understanding of violence and live passive, tech-enriched lives. Under this utopia live a rebellious group of people lead by Edgar Friendly (Denis Leary) on a constant search to tag walls with graffiti and steal food because they are starving (the bastards!). Oh, and Sandra Bullock plays Lenina Huxley, a cop that lives in this future and becomes his guide, showing Spartan the ropes of this new society and revealing that she’s a fan of his work after watching it on laserdisc. Tee Hee. (For sc-fi readers out there, according IMDB and Wikipedia her name is a combo of Aldous Huxley, the author of Brave New World, and the first name of Lenina Crowne, a character from the book).

To be frank, Demolition Man is one hell of a movie that really shouldn’t work at all. You have Stallone, a huge action star, in a heavy sci-fi movie about a super cop going after a super criminal in a future populated by pansy vegan people that don’t even have sex and use shells instead of toilet paper. What the hell? If I was a Hollywood producer in the early nineties I would’ve kicked that crap off my desk like it was infected with an STD. Thankfully, Joel Silver, the man who gave us such great films as Predator and the Matrix, decided otherwise and put some hefty muscle into a smart and quirky script. 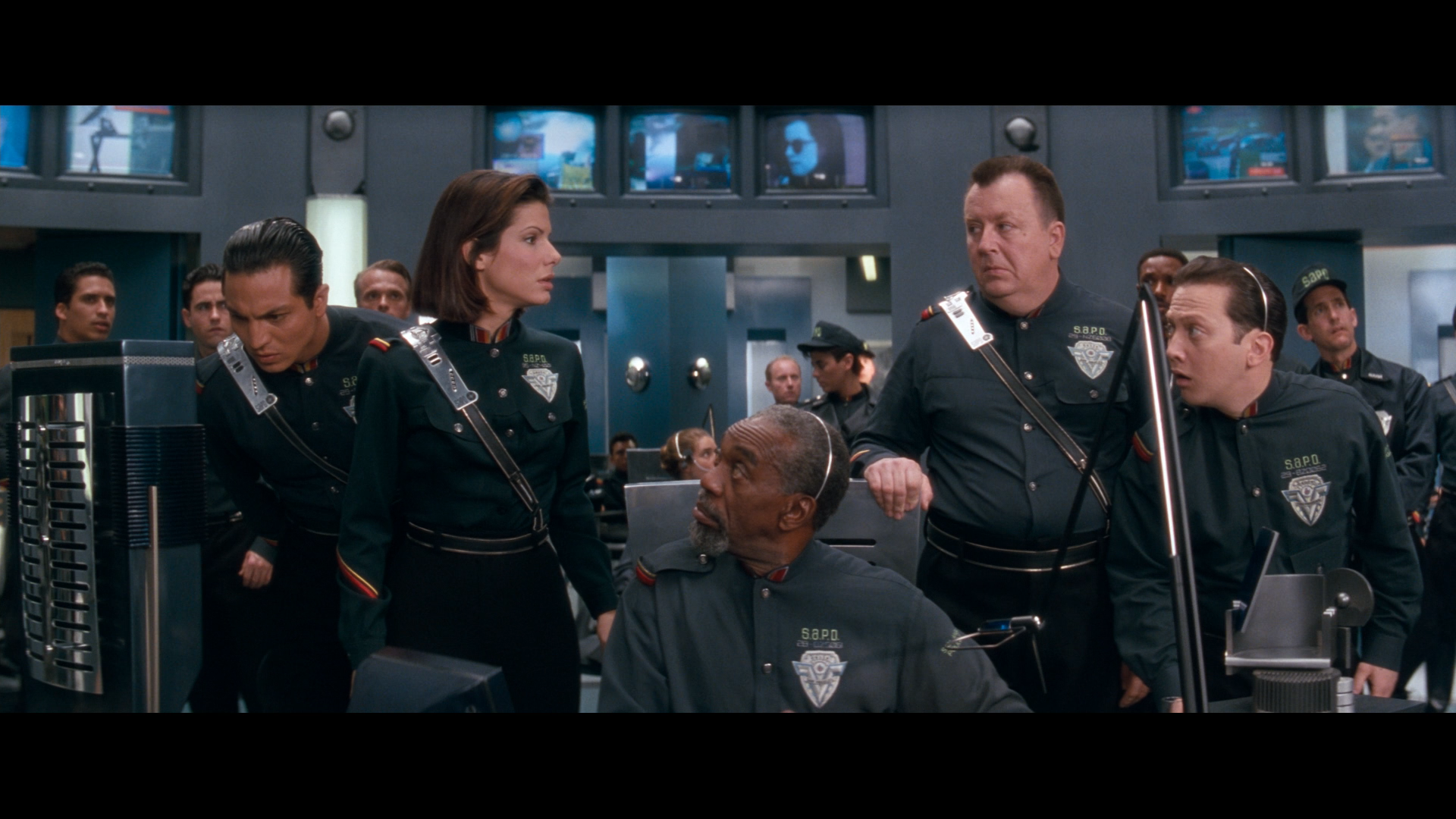 So what, you say? Stallone stars in a futuristic buddy cop film? Why should I care? Ok. I understand. First off, let’s see what this movie got right as a sci-fi film.
Not too bad for a movie starring Stallone in 1993. Nowadays people keep mentioning Minority Report (2002) as being the “got it right” sci-fi film of recent times, but this does just as good, if not better. However, some of the most entertaining moments come from what it gets wrong. As mentioned before, Huxley knows about Spartan’s history because of Laserdisc. Very funny. Also, Hollywood hasn’t been destroyed by a great earthquake (unless you consider the present state of piracy swallowing the industry whole). The list goes on, but that’s the fun of watching a movie like this. If you pay attention, you’ll have your own “ah-ha” moment where something is revealed. 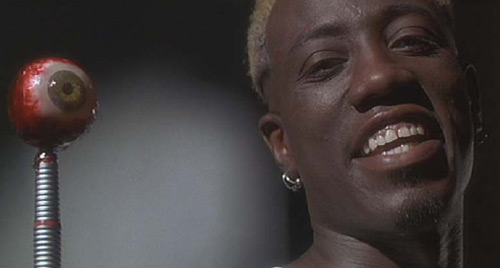 Another delight of this film is Wesley Snipes, who plays one of the best on screen bad guys of the 90’s, bar none. He’s enjoying the hell out of this part and makes being a psycho look fun. But it’s the little things about the character that make it work. What adds to the terror is that he’s been gifted with the keys to the castle. While Spartan can’t figure out how to drive a car, Phoenix can access top secret files without thinking about it. But my favorite detail is that his eyes are different colors. You don’t notice it at first, but once you do it adds even more imbalance to the character. Combine that with the constant joking and wild abandon of his performance and you have a bad guy that keeps you guessing until the end. 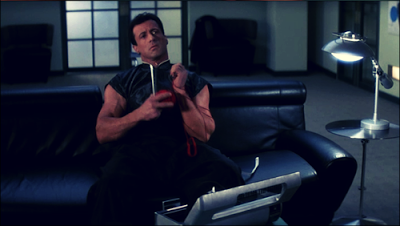 The perfect foil to all this is Stallone. By all means, he’s definitely done better acting jobs before, but in this movie he is so damn likable it’s easy to forget whatever ridiculous elements of the movie are in front of you and just roll with it. A couple of scenes that stand out are the classic “He hasn’t figured out how to work the sea shells” as well as the “Not a Sex Scene” scene with Bullock. He grounds the movie with an everyman persona and adds vivacity with that effortless snarl he gives whenever he’s kicking ass. At the worst you could say he’s going through the motions, but for this movie that’s all he needs to do. What’s going on around him is more important, and his reactions to what is going on in front of him push the story along and let the viewer know where the cracks are in this utopia.
Besides those two big characters the supporting cast of the film is second to none. Most famously, Sandra Bullock got her first major break as a movie star alongside Sly, and after this came the monster hit Speed (1994) where she became a full on star herself. But throughout Demolition Man her talents shine through. She helps make the buddy cop moments between them palatable with some whole hearted delivery of genuinely hilarious lines. She even makes her impromptu history lessons interesting as Spartan is constantly trying to make sense of this world around him. If Stallone is Dante in this Paradise, Bullock is Beatrice showing him the way. In short, if you pay enough attention you’ll laugh your ass off and see the talent that’s been with Bullock for a long time.  Also, she is so hot. Just mind numbingly hot. 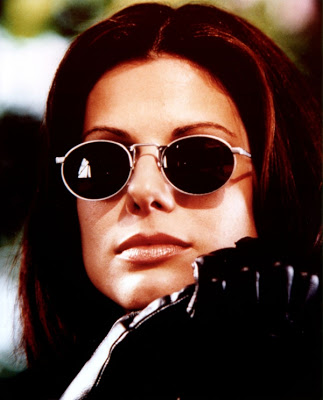 Dennis Leary also makes one of his more memorable performances as Edgar Friendly, the leader of the underground. It’s mostly a transposition of his standup personality (some of his lines are taken verbatim from his 90’s routine) and he manages give a ballsy performance among some huge Hollywood stars.
Benjamin Bratt also has a role in the film. Much like Bullock he gives a great performance while saying the corniest lines with the sincerest delivery. The other main heavy in the movie is Raymond Cocteau, played exceptionally well by Nigel Hawthorne. He is the creator of this utopia who is doing his best to make sure it is protected from the “riff raff” trying to spoil it by feeding their starving families and saying dirty things when they want to. This brings me to what I feel is the best part of this movie. The theme that goes all the way back to Metropolis (1927) and the novel  Brave New World (1932) is present in this film. It involves asking questions, like how much of our humanity can be surpassed before some part of society explodes? How much do we want to give up for our own safety, and what are the consequences of giving so much up? This movie in its own strange and fun way explores those answers, and Hawthorne gives a great performance as a benevolent leader with a serious mean streak. 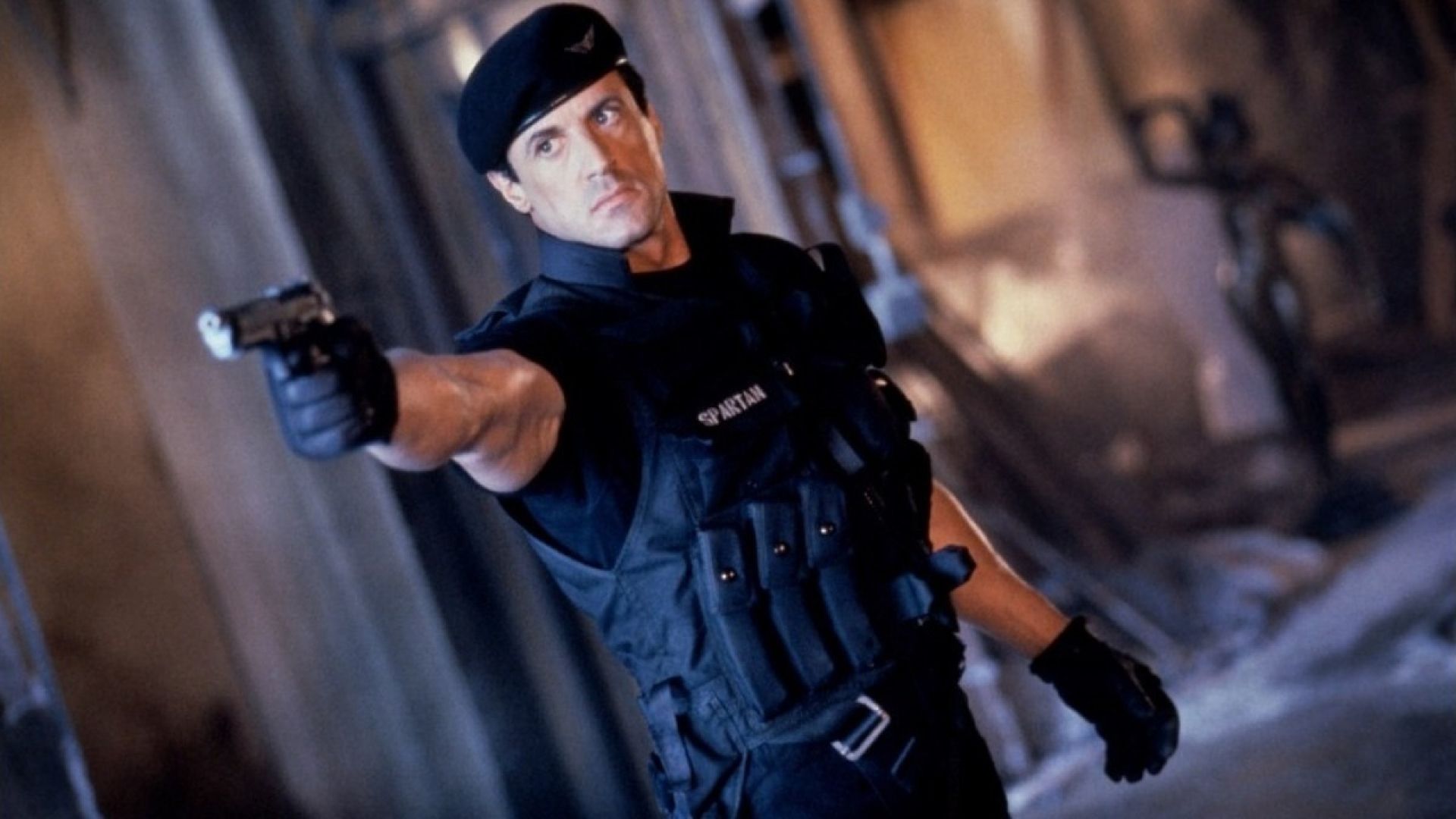 There are other tid bits that are worth mentioning that make it worth a look. All the future vehicles in the film (to my knowledge) are actual General Motors concept cars and it’s impressive that the vehicles still look futuristic even to this day. Rob Schneider has a role in the film as a cop and Jesse “The Body” Ventura makes a brief appearance as a bad guy but it’s too brief even for my well-trained eyes to see. Jack Black is also in there somewhere, and you get points if you find him!
The last and most mysterious part of this film is the director, Marco Brambilla. If you look at his IMDB page he directed Excess Baggage (1997), the Dinotopia TV mini series, some short films, and that’s about it. After doing a bit more research (various Google Searches) it looks like he’s just gone off and become a video artist. He did direct a music video that was commissioned by Kanye West. The song is “Power” (below) and Brambilla worked on it in 2010. Brambilla has his own website, and his video and art can be checked out here.
It’s seems to be a strange career path for someone who directed some of the largest stars in Hollywood in a film that made $101,000,000 worldwide. I for one would be interested in hearing why he’s not active in major Hollywood movie making. It’s clear he’s got some level of genius brewing in his skull. And it was on display in Demolition Man. It’s now a certified classic, and offered a glimpse into the future for those in the 1990’s fortunate enough to catch it. If you have chance to watch it on cable or Netflix or anywhere else I recommend you give it a watch. It’s stiff fun, relevant, and may have a few more predictions left up it’s sleeve if you look close enough.
(This was originally posted in 2010 but has been (heavily) edited and reposted in celebration of Stallone’s recent success. Also, it was our first movie review ever.)