Welcome to the third volume of 10-Hit Combo; the series for ActionAGoGo which takes a look at ten facts about some of the most iconic fighting video game series of all time. When it comes to fighting games to emerge within the fourth generation of gaming amidst the success of consoles such as Super Nintendo and the Sega Mega Drive, one that will never be neglected to mention is Killer Instinct. Originally published by Midway, and then ported to Nintendo consoles, and later the Xbox One, Killer Instinct was developed by Rare during the height of the company’s success as a second party developer for Nintendo, and received widespread critical acclaim upon release of the first game in 1994. Many of the various tropes used in the series have gone on to have a massive impact on gaming, as well as popular culture, and features one of the most well received character rosters in fighting game history. The impact that it has had on the genre over the last 20 years has been quite monumental, so without further ado, here are ten facts about Killer Instinct. 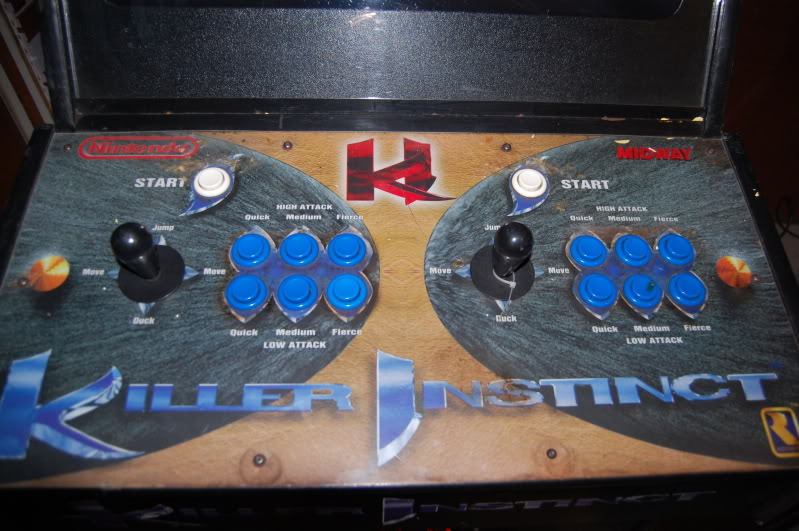 The idea for the series first came about when Nintendo approached Midway’s parent company, WMS Industries, which led to Midway receiving permission to develop arcade games using software that would later be incorporated into the Nintendo 64 console. Midway then formed a joint venture with Williams, creating the entity Williams/Nintendo to market the first of three planned fighting games, and being weary of not making the game overly violent, as Nintendo at this point took a very strong stance against the porting of violent video games on their consoles. The later found that the game would not actually run on Nintendo 64 hardware, so it was instead ported to both the Super Nintendo and the Game Boy where it became a commercial hit. 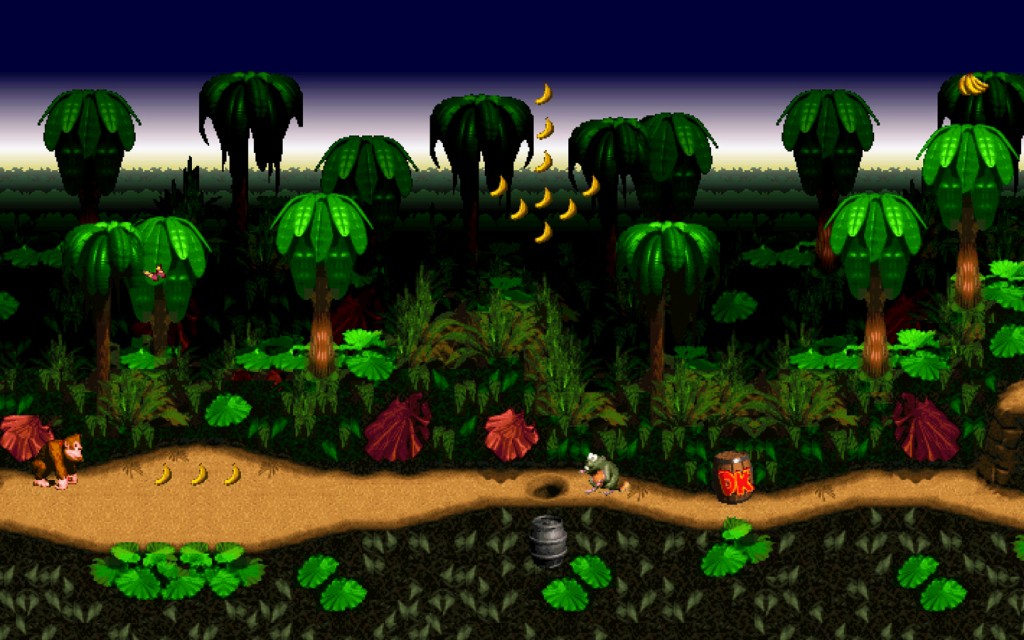 The principal designer on the project was Chris Tilston, who originally envisioned the game as a street punk themed fighting game similar to classics such as Streets of Rage or Final Fight. He once recalled that by basing characters on this theme, he would have a level of realism attached to it, but at the same time wanted to add a supernatural level to it in order to make it stand out among other prominent fighting games at the time, such as Street Fighter or Mortal Kombat. The character that perhaps perpetuates this idea more than any other character in the original game is TJ Combo, who first appeared in the tech demo for Killer Instinct, which was a simple boxing game created using the 3D rendering style in the game that peeked Nintendo’s interest; so much so that the Donkey Kong Country trilogy (also developed by Rare) was also made using the same method.

Although there are no characters in the series based on real life fighters, as is the case with many fighting game series, there are quite a few characters based on other works of fiction. For example, ARIA bears a great resemblance to the Cybermen in Doctor Who, Tusk borrows many traits of Conan the Barbarian, as well as being based on Chris Hemsworth’s portrayal of Thor in later games, and Spinal was based on the skeletal warriors depicted in the film Jason & the Argonauts. It’s also interesting to point out how many of the characters in the series resemble characters featured in the Mortal Kombat roster. For example, Black Orchid loosely resembles Sonya Blade, Chief Thunder resembles Nightwolf and Sadira resembles Mileena. The conceptual relationship between Cinder and Glacius can also be compared to that of Scorpion and Sub-Zero. 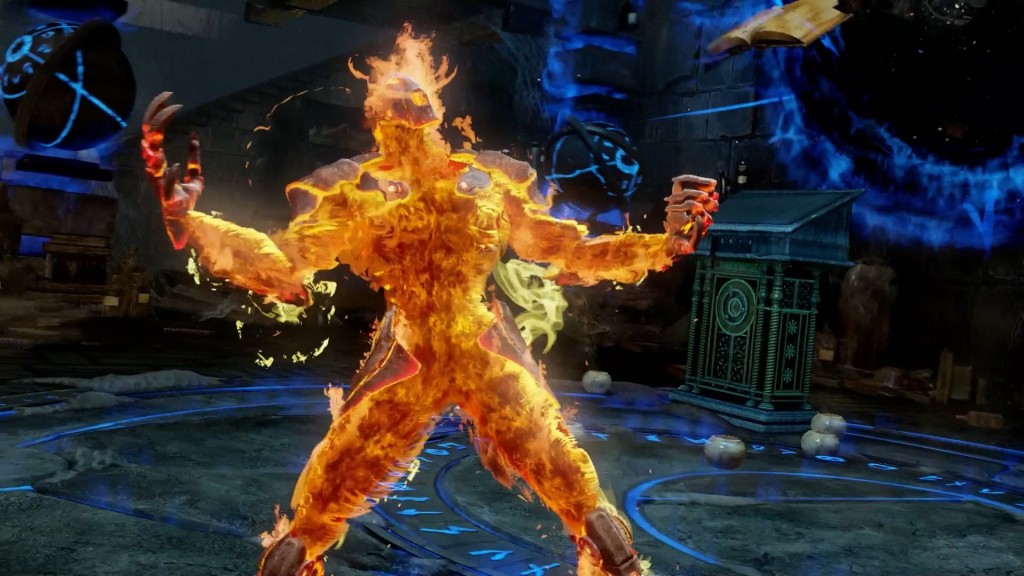 Speaking of Cinder and Glacius, their conceptual and technical designs were among those that were the most considered during development. Cinder, in particular went through multiple name changes; among them being Meltdown, Magma, Heatshade & Pyrotech. The character also gained notoriety for how overpowered he is in the original game. In fact, his infinite combo became so much of a problem that developers countered the glitch by manually installing ROM updates for over 17,000 Killer instinct cabinets. Both he and Glacius were also created following Rare’s experimentation with 3D shading effects in the game’s modelling software. 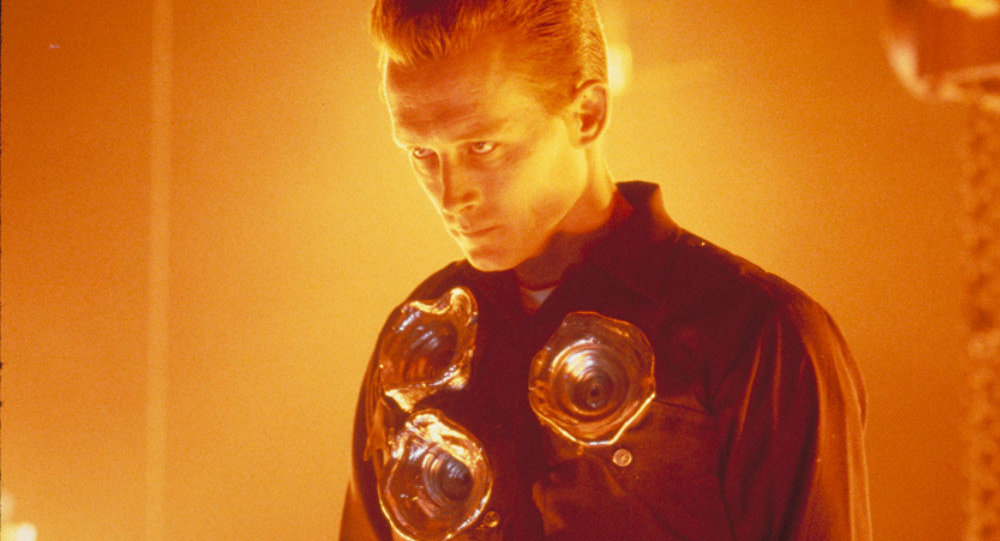 The 3D shading effects also became the basis for a rumour that has been speculated sine the series’ inception centring around the character Glacius. The rumour was that the conceptual design of the character was based on the T-1000 portrayed in the film Terminator 2: Judgment Day. Another coincidence that also lent credence to this rumour was that the actor who played the T-1000 in the film, Robert Patrick, also starred in a film called Behind Enemy Lines in 1987, which was originally entitled Killer Instinct. Patrick’s relationship with fighting games also doesn’t stop there, as he also starred in the film adaptation of the game Double Dragon, and coincidentally stars in a drama series called Scorpion; very loosely alluding to Mortal Kombat. 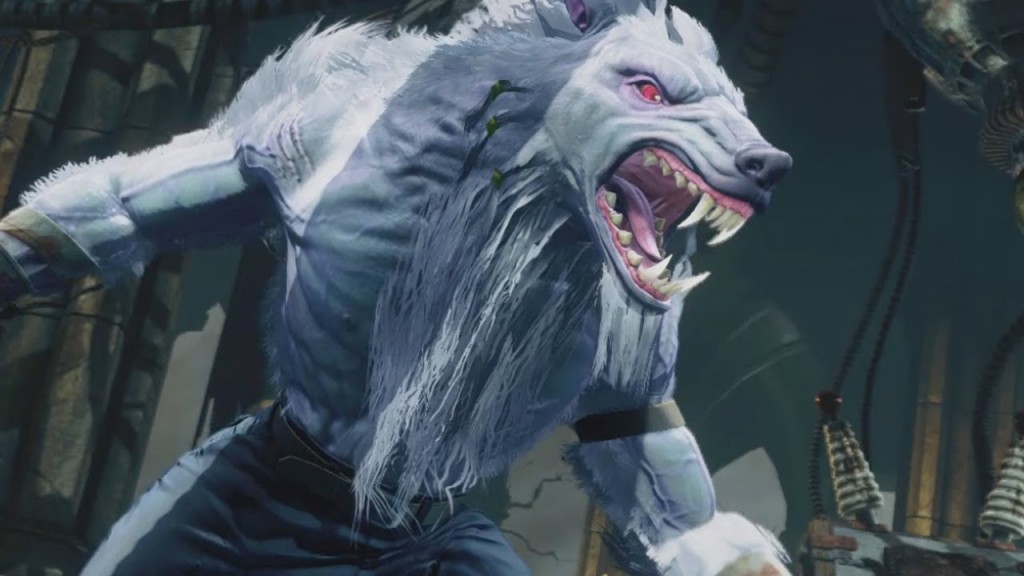 Aside from both Cinder and Glacius going through a lengthy developmental process, many ideas were also considered for the character Sabrewulf, whose name is in itself is an Easter egg put in the game by Rare. Sabre Wulf was the name of a ZX Spectrum game developed in 1984 by the company back when they were called Ultimate Play the Game, and the protagonist was also called Sabreman, further alluding to the whole wolfman concept of the character in Killer Instinct. Kevin Bayliss, who handled the character design for the original game also intended for Sabrewulf to revert back to his human form when low on health, but technical limitations at that time made it impractical, and so the idea was dropped. 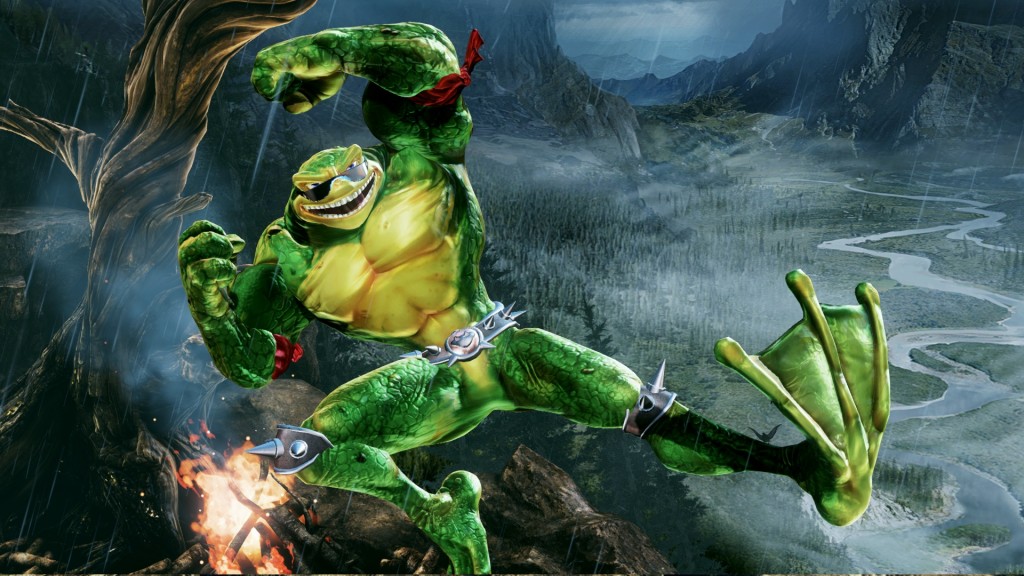 Throughout the years, Rare have littered many of their games with Easter eggs. Both Banjo-Kazooie and Grabbed by the Ghoulies have numerous references to the old rare game Atic Attack, and Conker’s Bad Fur Day references several films, such as A Clockwork Orange, Star Wars, Indiana Jones and The Wizard of Oz. Killer Instinct is no exception. In the reboot, Rash from the game Battletoads is also a playable character, and the character Riptor could arguably be considered a loose reference to the Battletoads series in himself. It was following the poor commercial success of the game that Rare had very little hope for Killer Instinct performing well commercially. But eventually, they were proven wrong. 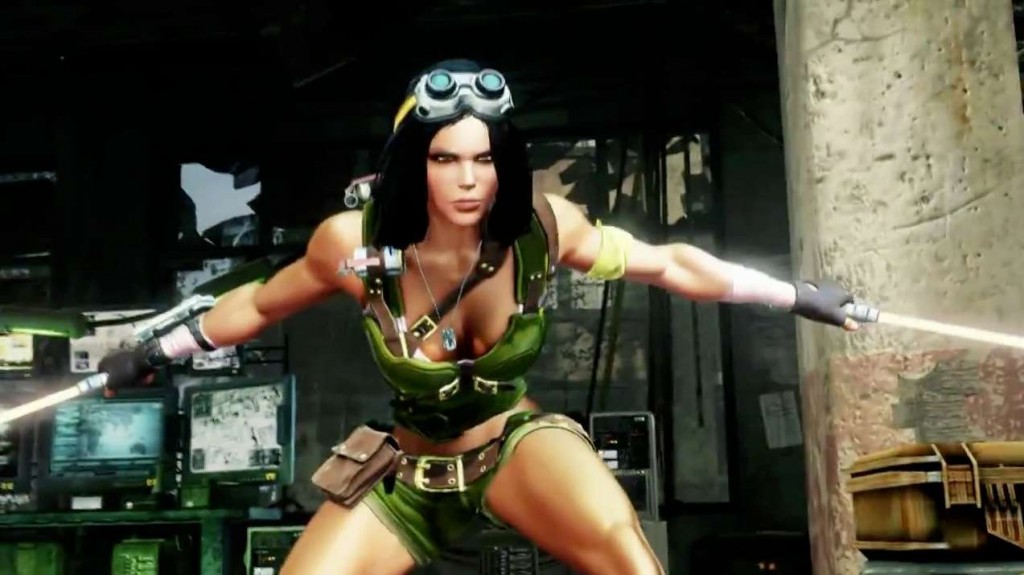 Motion capture techniques were also used to render the movement of the 3D character sprites in the original game; the undertaking of putting the character Black Orchid through this process makes for a particularly interesting story. The actress used to capture Black Orchid’s movements was Louise Stamper; possibly related to Rare’s founders Tim & Chris Stamper. Kevin Bayliss later recounted the process in an interview with Retro Gamer stating that he also attempted to wear the suit himself complete with high heel boots as a joke, going on to say that it looked dodgy to say the least. 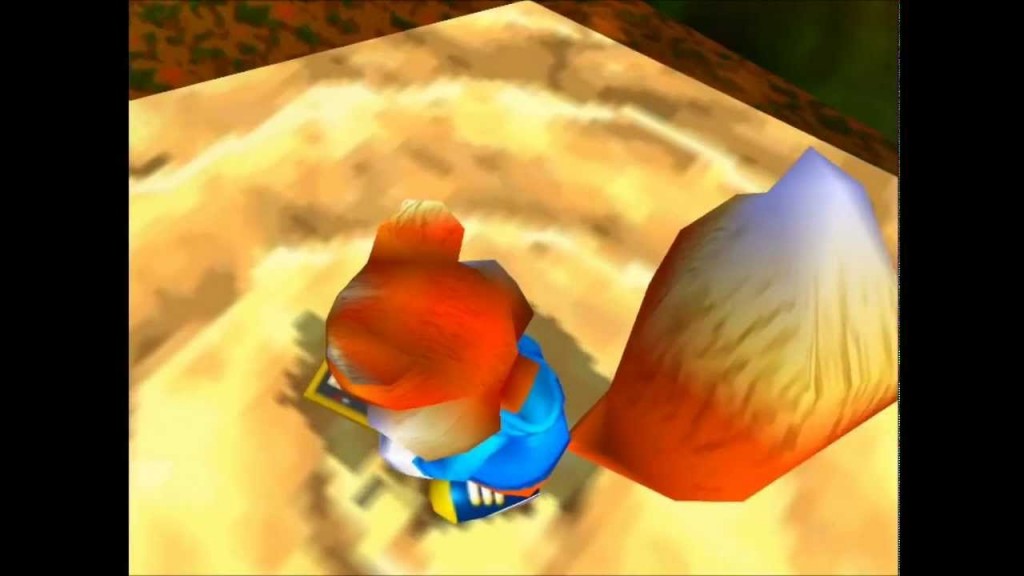 Killer Instinct includes several Easter eggs alluding to previous Rare games, but in some instances, this has worked both ways; perhaps most notably in the game Conker’s Bad Fur Day. If the player leaves the controller idle for enough time in the game, Conker will pull out a yellow Game Boy and start playing it, and sound effects suggest that Conker is in fact playing Killer Instinct on it. A copy of the game can also be seen in the game Grabbed by the Ghoulies, on one of the shelves in the mansion. The game Banjo-Kazooie: Nuts ‘N’ Bolts also pas homage to the series in several ways with one the game’s vehicles being named Fulgore’s Fist, and the player being able to ask the NPC Bottles the question “So, what do you know about KI3?”, alluding to rumours of the release of an eventual third game. 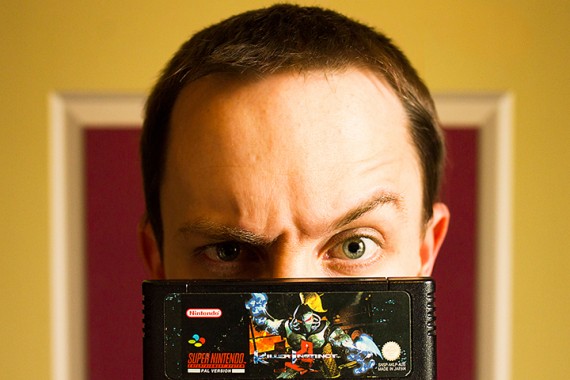 When it came time to revamp the series amidst the launch of the Xbox One, composer Mick Gordon was brought in to compose the game’s soundtrack, A long-time fan of the Killer Instinct series, Gordon provided his own fair share of allusions and Easter eggs paying homage to the original games, such as inserting his own renditions of the original soundtrack into the menus, and in battles for when the player leaves the controller idle for a long enough period of time. The score composed for Spinal’s theme in particular, was said to have taken over three months, and combined the efforts of over 20 different composers from around the world. It was also partly recorded with a Tibetan instrument known as the kangling, which is a flute traditionally crafted from the human femur, alluding to the fact that Spinal is an undead skeleton.