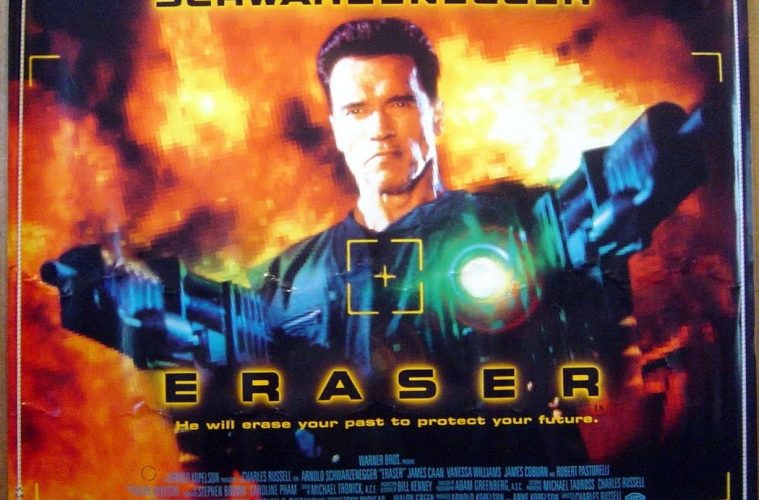 It’s scary when we think of our favorite movies and realize just how old we really are. And looking back at the movies of 1996, it makes me feel so old now, as I was an 11-12 year old boy when all of those movies came out, movies that shaped me into a big movie fan, giving me so many of my favorite movies. So to celebrate one of the greatest years in action movie cinema, there will be several reviews coming over the next few days, picking out the very best from 20 years ago. And to start…

It doesn’t feel like 20 years ago when ‘Eraser’ was released. I remember seeing it for the first time like it was yesterday. A fellow schoolboy brought his VHS tape into the classroom for us to watch. The teacher and school principal were in a rage, thanks to the high rating of the movie (Rated R in the US, 18 cert in the UK and Ireland). We almost didn’t get to watch it, until our teacher read the synopsis on the back of the case and shouted “Alright boys! We really do have to see this! It sounds fantastic!”. And it really was. It was so fantastic, it managed to keep a classroom of 28 boys completely silent, aside from the much deserved whistling for Vanessa Williams. The memories of that have stayed with me 2 decades later.

‘Eraser’ came along 2 years after Arnold Schwarzenegger’s smash hit blockbuster ‘True Lies’ (Reuniting with ‘Terminator’ creator James Cameron), determined to carry on the action icon’s legacy throughout the 1990’s. But as a long time Arnie fan, 1996 was the year that delivered not just one wonderful movie, but two, with the Christmas classic ‘Jingle All The Way’ following only months after ‘Eraser’. And both have remained firm favorites for me through the years. But ‘Eraser’ not only holds a spot in my all-time top 10 favorite movies, it stands as my favorite Arnold Schwarzenegger movie. While many will balk at that choice, I have many reasons.

Schwarzenegger stars as John Kruger, a hard-boiled US marshal assigned to protect Lee Cullen (The wonderful former Miss America/Glamour model/Award winning singer Vanessa Williams), a woman who is set to testify against a weapons company she has been working for, after she discovers they are making both illegal weapons and illegal sales. But things go from bad to worse when Kruger not only discovers that his mentor and friend (Played by the legendary James Caan) is behind the sales, but is also selling the weapons to terrorists overseas, in a bid to profit from a possible future World War III. With time set against them and hoards of violent killers armed with the latest illegal weaponry (Ranging from portable rail guns to nail bomb grenades) hot on their trail, Kruger and Cullen battle against the odds to take down the evil war profiteers and save the world from devastating warfare.

Every action fan understands the career canon of Arnie. He has never been tied down to one type of movie, instead ranging from various types of action cinema to hilarious comedy roles in movies such as ‘Twins’ and ‘Junior’ (‘Junior’ actually came out before ‘Eraser’, if I’m not mistaken?). But summing up his action career, we have sci-fi, war, adventure, thriller, action comedy etc… And ‘Eraser’ is the movie that combines all elements together in one massive melting pot. Capitalizing on Schwarzenegger’s witty one-liners and his awesome strength, ‘Eraser’ puts the great man through his paces, mixing together his many different action styles, as his character Kruger plunges from airplanes, escapes alligators and eventually gets his hands on the dastardly weapons of war, to use against their owners. Mixing great comedy through with the late great Robert Pastorelli providing many laughs as a mafia traitor who’s help is called upon, and never shying away from the brutal violence we all love in a big action movie, Arnie’s star shines brightest for me in this movie.

The action scenes are absolutely incredible, namely the death-defying plunge from an airplane, with Kruger chasing a parachute midair. Rarely have I seen something so spectacular in a movie. Although a stuntman used in much of the sequence, nothing like it had ever been seen in a Schwarzenegger movie before. It actually became more James Bond than anything even ‘True Lies’ had to offer. To see the hero of an action movie almost ran down by a plane in flight is still one of my greatest highlights in movies. And we seriously have to mention the Alan Silvestri score, for the whole movie yes, but especially in that scene. It’s glorious, and yet more proof as to why Silvestri is one of the greatest in the movie music business. The alligator scene may have dated badly, due to early computer CGI, but it hasn’t lost any of its impact. Or its gore. Arnie’s immortal “You’re luggage!” quote after shooting one dead still makes me laugh so hard. And the finale, without spoiling too much for anyone who hasn’t seen it yet, is magnificent. The sight of Arnie with those guns is still the coolest image in action cinema, in my opinion.

The rest of the cast are on top form, with James Caan having great fun as the lead villain, spitting out his lines and chewing up the scenery. The iconic James Coburn also provides a solid, if way too short, performance. Robert Pastorelli has more fun than anyone, as the mafia stooge, showing his great talent as a comic actor. He was taken from us way too soon. And Vanessa Williams herself is just perfect. Equal amounts of damsel in distress and touch cookie, mixed with plenty of sexiness without ever actually attempting to be sexy. She couldn’t have played it better. She also provides a song for the end credits. Chuck Russell, director Jim Carrey’s classic ‘The Mask’ and ‘The Mummy Returns’ spin-off ‘The Scorpion King’ is at his best on ‘Eraser’, taking advantage of the fantastic scenery of Washington and Baltimore, while also proving he’s one of the best action directors, again with that joyous airplane sequence and the many special effects laden shootouts and explosions. It’s a shame he isn’t offered more from Hollywood. Check out the ‘Making Of’ below.

‘Eraser’ most likely won’t be the number 1 choice for a Schwarzenegger fan, or even a serious action movie lover. But I put forward the case that not only is this his finest movie, but that it’s easily one of the greatest action movies ever made, thanks to not only Arnie, but also to the terrific support cast, the brilliant directing, the glorious Alan Silvestri score and the several major action scenes that are almost impossible to beat (The final ‘payback’ scene is truly epic!). It’s 20 years old, but ‘Eraser’ stills rocks my world and remains high in my list of favorite movies. The perfect showcase for Schwarzenegger and what an absolutely wonderful movie star he is. Enjoy the many kills below, spoilers obviously included.

“I’ll be back” with a look back at 20 years of ‘Jingle All The Way’ nearer the holiday season. “Stick around!”.