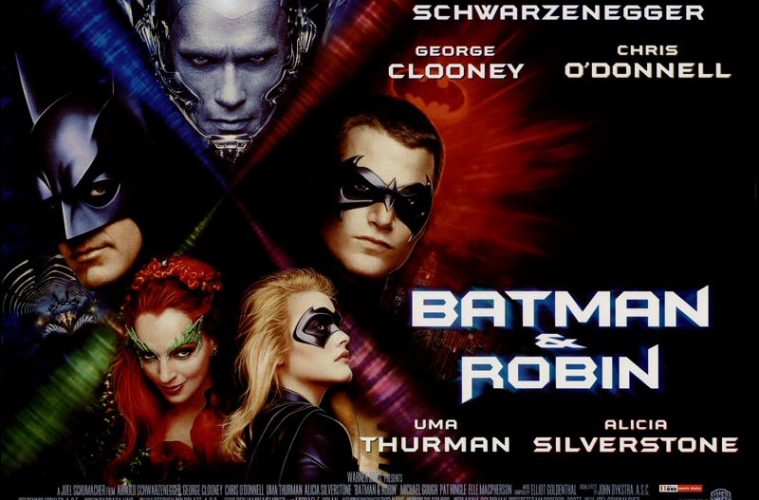 Movies are the greatest. Let’s just get that said. The thrill of watching a movie is just the greatest feeling. As movie lovers, we crave that new experience that only a movie brings. Especially if it’s a movie that adds to something we hold dear. Such as the latest adventure from one of our biggest heroes, or another addition to a popular franchise. The joy of seeing that for the first time is dazzling. But movies also divide fans of the big screen. Some see a movie and love it, while others could absolutely loathe it. And even sometimes those who like a movie can understand why there’s such dislike for it. And that phenomenon can be summed up no better than it is by 1997’s ‘Batman & Robin’. While some will question why I’ve chosen to look back at this movie as part of our ‘Best Action Movies Of 1997’ series, I’m here to perhaps shed some light on one of cinema’s most despised movies, and give a little deserved love. After all, when every video of it on YouTube seems to have as many dislikes and likes, you know some people just want to be negative by searching it down at all. So now feels like the time to share some thoughts on it.

George Clooney takes over Batman duties from Val Kilmer after 1995’s ‘Batman Forever’ (Which I absolutely adore, and will cover in a separate piece at some stage), while Chris O’Donnell (Who returns after ‘Forever’) once again takes on the role of Robin/ Dick Grayson. Batman and Robin, Gotham City’s protectors, are faced with a new foe, the spectacular Mr. Freeze (Played by the world’s greatest action star, Arnold Schwarzenegger). Freeze is a scentist who is horrificly injured after falling into a vat of freezing chemicals, while trying to find a cure for his dying wife’s disease. With his body mutated to only survive sub-zero temperatures, Freeze is now a cold-hearted maniac, who’s only warmth lies in the love of his wife. Determined to cure her, he sets out to blanket Gotham in eternal winter, unless his demands for billions of dollars are met.
And that’s where the good things end. For then, in keeping with the previous movies having two or more villains’, the writers of ‘Batman & Robin’ felt the need to include Uma Thurman as Poison Ivy. As a lifelong fan of Batman, I’ve never been keen on Ivy. But give her the worst script ever and a terrible performance from Uma Thurman, and you’ve got absolute hell on screen. I’ll get back that in a few moments. George Clooney for Batman is an inspired choice… A filthy rich beautiful man, who can switch between bright and fluffy, to dark and sinister. An can also kick the ass of any enemy he encounters. While Clooney might not be primarily known for action cinema, his movie ‘The Peacemaker’ (Co-starring the magnificent Nicole Kidman from ‘Batman Forever’, among dozens of other classics) still stands as one of my all-time favorite action movies. Read my review here. And he kicks more ass in that movie than anyone could ever ask for. So naturally he’s a perfect choice for the Dark Knight. Chris O’Donnell is not bad as Robin, but definitely a weak point, especially in the Ivy storyline. Alicia Silverstone is one of the most beautiful women in Hollywood, and as Batgirl/ Barbara, she may not shine as an actor, but my God she makes herself known in every scene she’s in. Absolutely divine woman. And she brings a lot of much-need feminine awesomeness to the movie. The Bat helmet is awful though.

And despite the constant bad word of mouth for Mr. Freeze, I’m a huge fan. Arnold Schwarzenegger is the ultimate name in action, we’ve long loved him for his powerful presence, hilarious one liners and his thirst for violence. And as Freeze, he truly is a wonderful character. He is everything I’ve ever loved in a Batman villain. Camp, crazy, and a costume that defies almost anything we see in other movies. Think back to Jack Nicholson as Joker, Danny DeVito as Penguin and Jim Carrey as Riddler. Beautifully bonkers and brilliantly designed characters. Not to mention Michelle Pfieffer as Catwoman… Wow. And Schwarzenegger fits that bill perfectly. His script is filled with cheesy treasures such as “What killed the dinosaurs?… The ice age!”, as he blasts a history museum with freeze rays, and “My heart is cold to your pleas for mercy!”. Just so many one-liners from the king of one-liners! And he looks incredible in every scene, the costume is glorious, and the special effects around him are spectacular. A really awesome character to see in a Batman movie.

But sadly, as I mentioned earlier, ‘Batman & Robin’ also features Uma Thurman as Poison Ivy. This is such a hard topic to discuss for me. It’s hard to pinpoint an exact spot where the performance and her story are bad. It’s just all terrible. From her terrible plant-rant introduction with Bruce Wayne, to the awful scenes where she constantly tries to seduce everyone, she just ruins the whole movie. And this mainly comes down to her intigration into the movie’s story. Forcing her into a partnership with Arnie’s Freeze brings down his performance for a while. And the scenes were Batman and Robin fight over her are so hamfisted and embarrassing. The whole scene with them both outbidding for her at an auction is a nightmare. Not to mention the fights over how much she wants Robin more than Batman. It’s just rotten. People always claim that Arnie as Freeze and the Bat nipples are what make the movie bad. Along with a bad story. But I say Arnie rules, the Bat nipples are no more stupid than the six-pack from the Michael Keaton movies (A bat with a six-pack? Oh please!) and the story of Freeze’s love for his wife and his bringing frosty hell to Gotham to save her is wonderful. And then there’s the other stuff. Alicia Silverstone being in it at all brings up the quality level, the Elliot Goldenthal score is magnificent, and the songs from Smashing Pumpkins and R. Kelly are perfect. If you truly try to look past Ivy, you could seriously see some amazing stuff in ‘Batman & Robin’. But alas, she’s there almost constantly. And not to mention the stupid Bane character they put alongside her. A murdering psychopath filled with plant venom, taking orders from a crazed plant lady? I can’t even begin to describe how bad that is. I’m swearing it now, if you took her, all her story, and all her additions away from this movie, you’d have something fantastic.

For those fantastic things, obviously I love George Clooney as an actor. But as Batman/ Bruce Wayne, I also love him. He brings such fun to the movie. He looks the part, his voice is brilliant, and his acting in parts genuinely some of the best I’ve ever seen in the character of Bruce Wayne. The scenes with Bruce and Alfred (Played by the brilliant Michael Gough) are beautiful. Especially the scene as Alfred lays dying, and he and Bruce express their love for each other. Even my mother cried during that scene. Such a tender moment among all the crazy antics. I’ve clearly already mentioned how big a fan of Arnold Schwarzenegger as Mr. Freeze I am. When he crushes that frozen snowglobe in his hand, I know I’m watching an Arnie movie. As with all Batman movies, the action must be paramount. What is a hero without adventure? We’ve seen it so many times. Comic book movies peddling backstories of their heroes, while forgetting that the audience are actually hoping for a bucketload of action. And for all the problems ‘Batman & Robin’ has, no one could ever say it’s not action-packed. The epic museum opening scene which ends with Batman and Robin sky-surfing on rocket doors, the brilliantly car/bike chase through Gotham, and the incredible finale with Freeze showering Gotham City with ice from a massive telescope. Yes, plenty of it is silly, but it’s a Batman movie that travels back to the classic 1960’s TV series. So anyone expecting the Tim Burton-directed movies would be badly mistaken. Director Joel Schumacher, who also directed ‘Batman Forever’ has never been given the kudos he deserves for directing his Batman movies, but I personally love his work. ‘Batman Forever’ is especially a movie I hold on a very high pedestal. That movie got me through some very dark times. As with movies like ‘The Dark Knight Rises’ and ‘Batman V Superman’, the writers can become consumed by the characters, and forget they’re making a comic book movie, and not a TV soap opera. Too much story, nowhere near enough action. And while I’ve come to love the heck out of ‘Batman V Superman’, I still see it as an excercise in patience. But with ‘Batman & Robin’, it does certainly lack in the storytelling department, but in fairness to it, it does make up somewhat for the level of absolute spectacle and action. The Batmobile driving over that giant statue is a lot of fun. And the motobike chase between Grayson and Barbara is a joy to watch. Pumping soundtrack and fast bikes jumping bridges, what’s not to love?

Movies have problems. Almost all of them. And some with more than they should. But for all the lousy writing stemming from Poison Ivy’s plot in ‘Batman & Robin’. I honestly think it’s a fun action movie with plenty to offer, especially to kids with a love of colorful action scenes and crazy characters. And I love that it went back to the classic Adam West show for inspiration. And on top of everything I love in this movie, it features one of my favorite women in the world, the absolutely perfect Sandra Taylor. One of the nicest and most beautiful people on the planet. Well known and loved for her days as a Playboy Playmate and Penthouse Pet, she went on to feature in several movies, including ‘Under Seige 2’ and obviously ‘Batman & Robin’, among others. She features in Bruce Wayne’s ball, where Mr. Freeze freezes her and steals the diamond necklace from her. I’m a great fan of hers, she may feature as an Action A Go Go’s Woman Crush Wednesday very soon. 1997 was an epic year for action cinema, and with many more movies yet to cover, I felt it was right to include ‘Batman & Robin’, and finally have my definitive say on it. Come back soon for a look at yet another comic movie that has long since been underrated, but has rocked my world for 20 years.