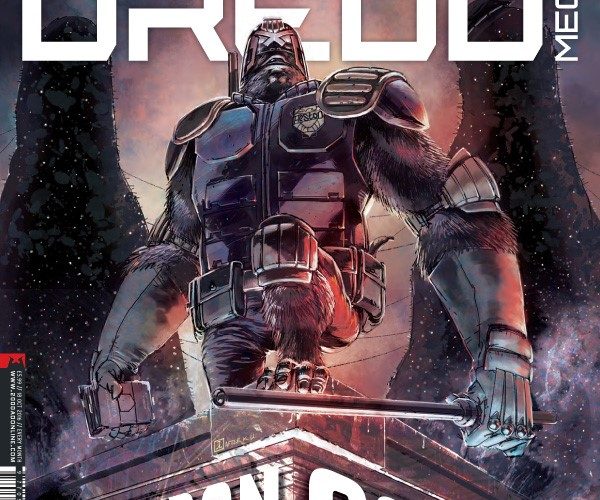 As a life-long fan of legendary weekly comic book 2000 AD, Stewart Perkins, 48, of Wymondham, was looking forward to fulfilling his dream of seeing Harry Heston, an ape-Judge character he created in the 1990s with friend Jake Lynch, finally appear in an official Judge Dredd story.

But tragically Stewart died suddenly and unexpectedly in May while working in Norway with the United States Air Force.

Next week, 2000 AD’s publisher Rebellion will publish the story that Stewart never got to see in its sister title Judge Dredd Megazine. 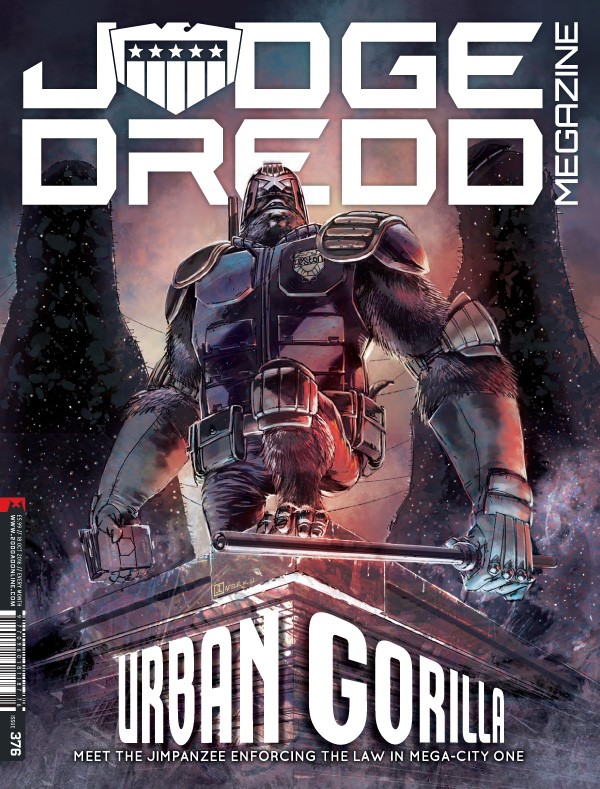 Based at RAF Lakenheath, Stewart – known to fellow 2000 AD fans as “W.R. Logan” – was a popular Army Cadets instructor as well as a veteran of the Queen’s Own Hussars. Born and raised in Stratford-Upon-Avon, his funeral took place in Norwich on 16th June.

Named after Dirty Harry and Charlton Heston, Stewart and Jake created Harry Heston for their Judge Dredd fan comic Class of ’79, which won Best Self-Published/Independent Comic at the National Comics Awards in 1999.

Drawn by Jake, the new story has been written by Judge Dredd writer Arthur Wyatt and is set in Dredd’s world 122 years in the future where genetic experimentation has given primates human speech. Heston is a smart-talking gorilla who lives in a shanty town outside the violent Mega-City One on the east coast of America. Modelling himself on Judge Dredd, Heston takes on a gang of muggers but, when they seek revenge, Heston and Dredd are forced to work together to take them down. 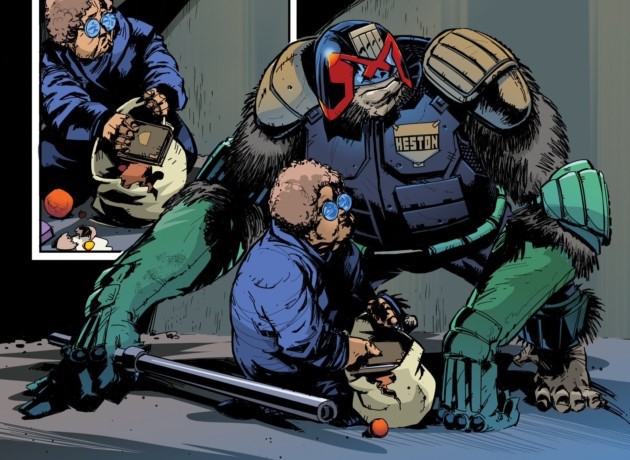 His partner, Deborah Ward, said: “About a year ago, Stewart burst through the front door, with a big grin on his face. Jake had just emailed over the first draft of the new Heston story and Stewart loved it. Many emails had gone back and forth since that day, and I remember Stewart proudly telling my friends about the forthcoming publication. I confess it was rather lost on them but no-one could resist getting swept along with his enthusiasm! Enjoy the strip and raise a glass to W.R. Logan, doing us proud yet again.”

His friend and artist on the story, Jake Lynch, said: “When Harry was born, we knew he was something special and it wasn’t just the beer talking. To see our ‘chimp-face’ accepted into the pages of the Megazine was the fulfilling of an ambition both Stewart and I shared. The spin Arthur Wyatt has put on it is perfect and SO in keeping for where Harry came from. I also shared all the artwork I produced for the strip with Stewart and he gave it all the thumbs up. It saddens me to know that he won’t ever see it in print but am happy to know the mighty “WR Logan” approved.”

Matt Smith, the editor of 2000 AD and Judge Dredd Megazine, said: “Harry’s a great character to add to the world of Judge Dredd and it’s a fitting tribute to one of Judge Dredd’s biggest fans. It’s a shame Stewart never got to see Harry in print, but I’m sure he’d approve.” 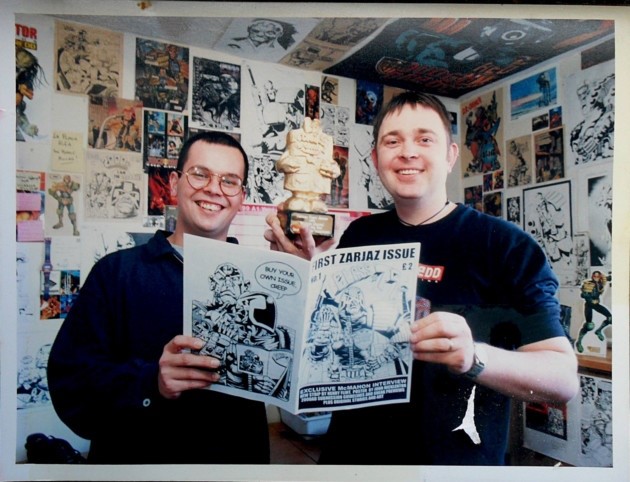 One of the best-known fans in the British comics scene, Stewart’s encyclopaedic knowledge of Judge Dredd history led to him advising the character’s co-creator, John Wagner; this led to stories such as 2006’s Judge Dredd: Origins, which laid out the character’s origin story for the first time. In return, Wagner used Stewart’s online pseudonym of “W.R. Logan” when he created the unlucky “Judge Logan”, who has starred in several major storylines, including 2016’s Dark Justice.

During the late 1980s and early ‘90s he had served with the Queen’s Own Hussars, a cavalry regiment of the British Army, and later he spent many years volunteering with the Army Cadet Force as an adult instructor. He had also previously worked for Rebellion, organising the 2000 AD archives.

Judge Dredd Megazine #376 will go on sale on 21 September from all good newsagents, priced at £5.99, as well as digitally from 2000 AD’s online shop and Apple, Android, and Windows 10 app.