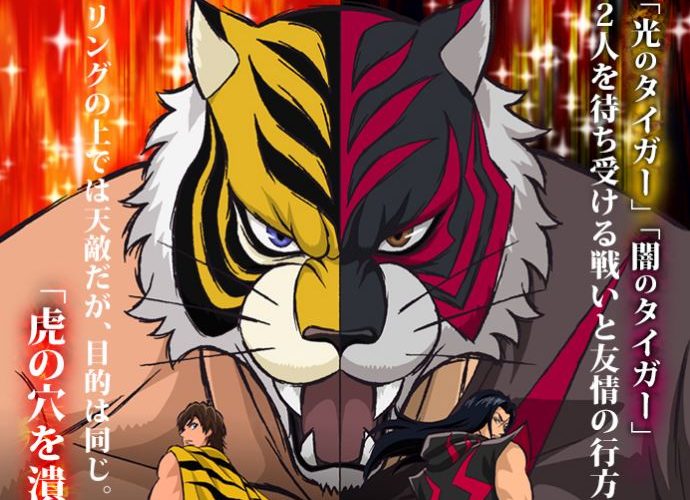 NJPW AND TIGER MASK ARE READY TO RUMBLE WITH WORLD

With the worlds of professional wrestling and geek culture blurring in spots these days, it’s easy to see why we are getting a wrestling anime again. It was only a matter of time given the publicity New Japan Pro Wrestling, the number one wrestling company in Japan, has been receiving over the last two years of its international expansion under the helm of Bushiroad (Cardfight Vanguard, Buddy Fight, Milky Holmes). It also doesn’t negate the avenues of publicity of World Wrestling Entertainment (WWE) in recent months and various fiction about the athletic art in the form of cartoons such as Mucha Lucha as well as comics such as Rival Angels by Alan Evans, Oni Press’s Super Pro K.O. by Jarrett Williams, and Troy Jeffrey Allen & Jay Payne’s BAMN. Despite the cheesecake fanfare of 2013’s Wannabe the Strongest in the World and the lack of a remake or revival of Kinnikuman beyond its merchandising collaboration with NJPW and showcase of its classic anime on NJPW’s official streaming site (NJPW World), it hasn’t hindered Toei Animation (Kinnikuman, Dragon Ball Z, Sailor Moon, One Piece, etc.) from reviving the classic Tiger Mask anime for new audiences in the form of Tiger Mask W in October.

Tiger Mask is a name that is quite synonymous with the world of professional wrestling through its first original mantle bearer Satoru Sayama to many great successors that graced the squared circle such as All Japan Pro Wrestling ace and Pro Wrestling NOAH founder Mitsuharu Misawa (Tiger Mask II), Koji Kanemoto (Tiger Mask III) and Yoshihiro Yamazaki (the current and longest tenured Tiger Mask to date). The name has even inspired a legacy in wrestlers playing Black Tiger, one of Tiger Mask’s villains. The most prolific of the Black Tiger legacy was the influential Eddie Guerrero as Black Tiger II. The offshoots of the Tiger Mask character have also included a female incarnation played by female wrestler Candy Okutsu.

However, Tiger Mask didn’t start off as a wrestler. The origin of this iconic character started in the pages of Bokura Magazine and Weekly Shonen Magazine (Kamen Rider, Great Teacher Onizuka, Fairy Tale) in 1968 by creator Ikki Kajiwara (Ashite no Joe/Tomorrow’s Joe, Kyojin no Hoshi/Star of the Giants, and Pro Wrestling Superstar Retsuden/Pro Wrestling Superstar Biography). The story revolved around Naoto Date, a villainous wrestler (heel for those who don’t follow wrestling terminology) who turned to the side of good after seeing the effects of his actions on a young orphan boy who idolized the heinous Tiger Mask. Naoto learned the boy came from the same orphanage where Naoto was raised, which only furthered his decision to leave villainy for good. However, his just deed doesn’t go unpunished by his former employer and series antagonist group, Tiger’s Cave, and soon our masked hero finds himself fighting for his life and the lives of the innocent against assassins and other pro wrestlers under the command of the evil outfit. Tiger Mask’s aerial acrobatics and martial arts skill combined with his signature mask and aesthetic became an instant success for Kodansha and Toei with its anime adaptations Tiger Mask and Tiger Mask II that it encouraged New Japan Pro Wrestling and All Japan Pro Wrestling to license the character for real life portrayals that would boost the character’s notoriety and aid the respective promotions in bringing attention to their Junior Heavyweight Divisions. Satoru Sayama embodied the same versatility that fit the Tiger Mask character from his range of wrestling techniques he learned during his excursions to Canada, England, and Mexico. From there, history was made with Tiger Mask as a wrestler who, with Dynamite Kid Tom Bellington, Black Tiger, and others would set the foundation for technical, fast-paced, high-flying action in professional wrestling in the 1980s that inspired many fans and wrestlers over the generations. 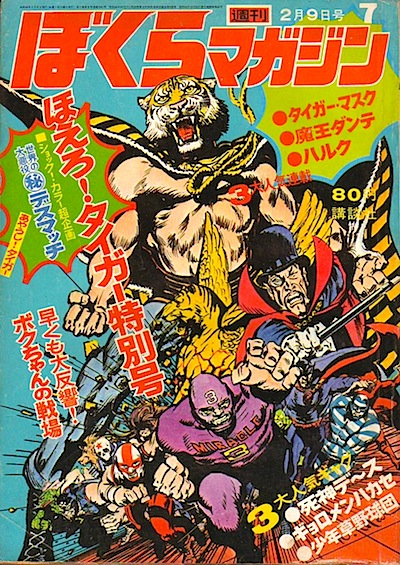 This is another feather in the cap of New Japan Pro Wrestling as its subscriber base for its streaming site has grown with well praised and attended shows led by stars such as “The Rainmaker” Kazuchika Okada, “The Once in a Century Talent” Hiroshi Tanahashi, Los Ingobernables De Japon leader and “Stardust Genius” Testuysa Naito, “The Wrestler” and former MMA fighter Katsuyori Shibata, “The Unchained Gorilla” Togi Makabe, and 4th leader of Bullet Club, “The Cleaner” Kenny Omega. In addition to trending social media with eye-opening matches (Ricochet vs Will Ospreay from the Best of the Super Juniors Tournament this past Summer), establishing a firm working relationship with U.S. based wrestling organization Ring of Honor and Lucha Libre promotion CMLL, and branching out with video game appearances in games such as Yakuza 6, NJPW is positioning itself for great success with the new Tiger Mask anime.