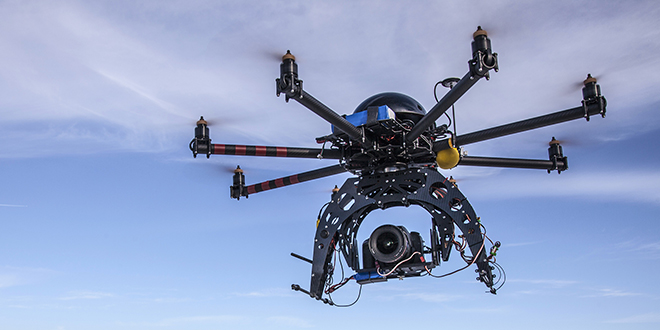 How Drones Are Being Used In Moviemaking

Using drones to film scenes in movies has gained popularity among directors and filmmakers over the past several years. Drone cinematography has been used to capture impressive action scenes, such as the opening scene in Skyfall (2012), but is more commonly used to achieve aerial shots. However, as drones begin to be utilized in a larger number of productions, the range of purpose and functionality continues to grow. Drone technology, such as stabilizing features, is improving all the time, making filmmakers more interested in using the equipment.

When thinking about the main uses of drones for filmmaking, aerial perspectives come to mind. Many opening and closing scenes of films feature scenes showing a landscape or city from the sky. Traditionally, these shots were achieved by renting and filming from helicopters: an expensive, time-consuming, and uncertain method. The possibilities presented by drones to capture previously unattainable vantage points are a very exciting prospect for many filmmakers.

The unmanned aerial technology has other advantages, too. Because the equipment is inexpensive enough to be accessible to the photography-savvy consumer, independent, hobbyist, and documentary filmmakers are beginning to use drones in their work. Logistically, using remote-controlled aircraft is a lot less complicated than other alternatives to achieving a bird’s eye view. The option to use drone videos in filming has added the opportunity to find fresh, new and unique perspectives without the cost.

In the past, strict regulations enforced by the Federal Aviation Administration (FAA) discouraged and prohibited filmmakers in the United States from using drones, even on established sets. However, drones were still used by directors like Martin Scorsese during this time. The Wolf of Wall Street (2013) filmed one of its extravagant party scenes in the Hamptons using unmanned aircraft. In 2014, most of the restrictions were lifted in relation to drones for filming purposes, and the technology has since become much more widely utilized in the industry. Films like Chappie (2015) and Jurassic World (2015) are just a few of the films that have since incorporated the use of drones in their productions.

The advent of drone usage in the film industry marks another turning point in the field. Throughout the history of cinema, technological advancements and quality improvements have allowed for more original work and inspiring, game-changing ideas. While filmmakers are still conceptualizing the different uses of drones in storytelling, the main use of the aerial equipment continues to be for pan-out shots and hovering above scenes or events.