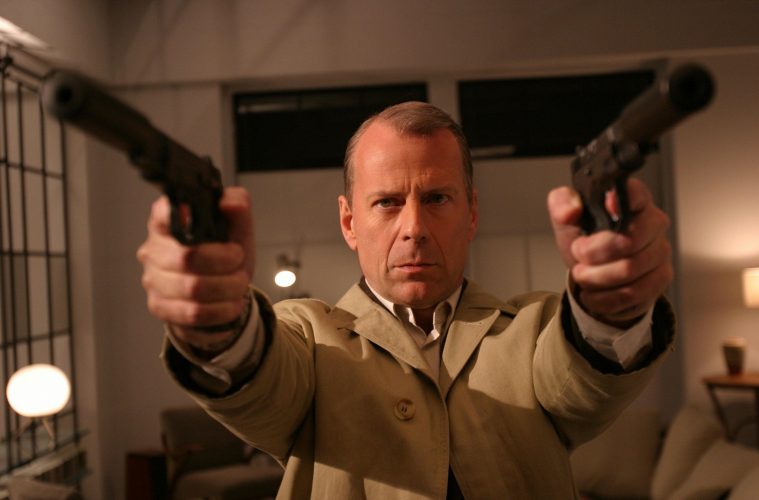 2017 marks year thirty in Bruce Willis’ filmography, and with a number like that, there’s some serious variation to be found in genres, roles, and of course, quality.

I’ve been tasked with taking a closer look at what Bruce Willis has done over the years, and I’ve divvied up that massive filmography into delicious Action A Go Go themed chunks. Here’s part two of our ongoing series. You can see part one HERE.

16 Blocks (2006): I like movies about dirty cops, dirty judges, bad lieutenants…you get it. So I should like 16 Blocks more than I do because it’s got the pieces. Mos Def plays a witness needed at a grand jury hearing, and Willis is at his most weary as Mosley, a detective with no love left for his job, who’s counting the minutes until the end of his shift. Tasked with one last errand before he can return to home to his bottle and moustache comb, Mosley and his charge, Eddie, find themselves in a world of shit long before they get to where they’re going. The raw meat of a great story is there, but the seasoning is off. Not minor to me is whatever Def is doing with his voice. It’s not nasal, it comes entirely from his nose. I respect making a character choice that’s a little off the map, but knowing how Mos sounds and how Eddie could have sounded, I can’t understand why Richard Donner let him carry on with the affectation. It prevents Eddie from being relatable or sympathetic, and keeps him at arm’s length as little more than a Character. I thought maybe I was being too aurally sensitive, but another rewatch confirmed it. I can’t get past that voice. Then there’s Bruce. He’s not miscast as Mosley, but I found myself thinking about what the movie would have looked like had David Morse and Willis been cast in opposite roles – Morse taking the lead, and Willis playing the slick antagonist. Willis, like Def, seems dressed to play his role instead of inhabiting it.

Lucky Number Slevin (2007): In a small role, Willis lurks behind closed doors and curtains in Lucky Number Slevin as a trench coat wearing mystery man. Somewhere in the middle of the movie, after another character introduction, I declared it the War and Peace of talky crime flicks. Post-Quentin, crime pics seem to go one of two ways – stoic or talky, and this one is a chatterbox. But so much of that chatter is unnecessary, parroted back questions and reiterations that don’t crackle along so much as they sound like improvers stalling for time. There’s a lot of people and a lot of plot to keep track of in here: mobsters, bookies, henchmen, hit men, and the unlucky Slevin, who finds himself mistaken for a friend and in the middle of it all. I’m not one to shy away from a dense plot, but somewhere around the beginning of the third act, Slevin’s dilemma’s get murky. I felt myself tuning out, letting the more wordy scenes float by as I focused on the intricate patterning in the set design. Beautiful stuff. But I’m glad I hung in because there’s more beauty to be found as the film wraps up. The supporting cast is impressive: Lucy Liu, Morgan Freeman, Ben Kingsley, Stanley Tucci, Willis; but it’s Josh Hartnett’s movie. I always wondered why he wasn’t able to gain a higher status or nail down better adult roles, and after seeing Slevin again, the question remains.

Perfect Stranger (2007): There’s a lot going on in Perfect Stranger, and I can’t think of a single element that really works. Halle Barry shows us what a tough cookie investigative journalist she is through a series of furrowed brow exclamations and bad hat choices, Willis is the advertising mogul she’s investigating. Perfect Stranger is a murder mystery with no real mystery and no real likable characters, but that’s not even the most annoying thing about it. As Ro (Berry) takes on different personas both online and in real life to trap her man, it’s the online interaction that not only stalls the already-slow pacing but takes the movie to a level of technological silliness that feels more 1997 than 2007. It’s not because her chat program looks too old or because her default font is hot pink and italicized, but because Ro is completely bewildered that people flirt online. Com’on now. This is a woman who uses sexuality to get what she wants from the first scene, but flirting in text is a wild and weird new world. The thrills in this thriller are very few and not far between; it’s back-loaded with flashbacks and revelations that feel tacked-on and desperate.