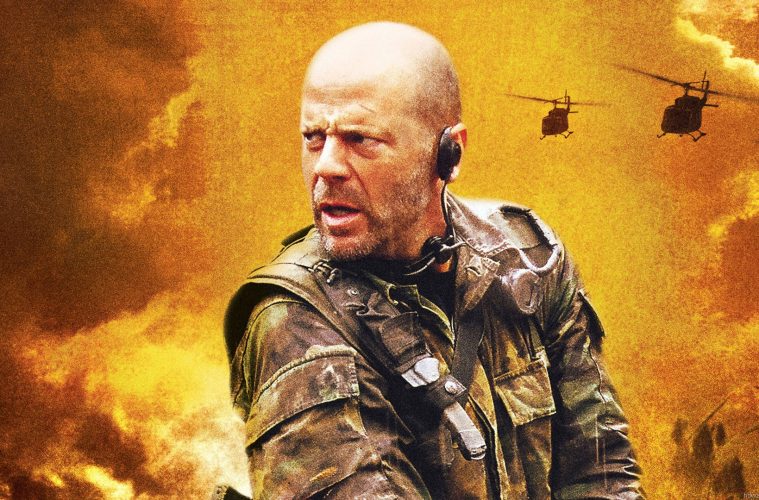 Bruce Willis has one of the most recognizable faces in movies.

He’s also a movie star I’ve taken for granted because he’s always been there. A Hollywood staple. Starting with his first credited role, 2017 marks year thirty in Willis’ filmography, and with a number like that, there’s some serious variation to be found in genres, roles, and of course, quality.

I’ve been tasked with taking a closer look at what Bruce Willis has done over the years, and I’ve divvied up that massive filmography into delicious Action-A-Go-Go themed chunks.

In our first installment, three flicks from the 2000’s.

Tears of the Sun (2003): Coming off the success of 2001’s Training Day, Antoine Fuqua’s next film was Tears of the Sun. It’s heavy to take in no matter what the political climate, but given America’s recent steps backward, watching refugees do everything humanly possible to escape their war-torn nation is especially appropriate. Fuqua gets gristly showing the rebel army warfare, and when we’re introduced to Dr. Kendricks, played by Monica Bellucci, it’s obvious her peaceful Nigerian mission hospital is in the direct path of destruction. Willis is Lt. Waters, a Navy SEAL leading his team into the jungle in order to rescue and remove her and three colleagues, all US nationals. His straightforward mission becomes complicated when Kendricks, refuses to go without her refugee patients that are well enough to leave as well. Neither the team nor their rescue efforts are equipped to handle the men, women, and children Kendricks insists on bringing along, and Waters is tasked with a series of moral decisions that dictate not only his future, but the possible future of a country as well. Willis wears the weight of these choices in every close-up. Any kindnesses spoken in his direction are met with a quiet, “hurry, please;” the barest acknowledgment for the moments when time, and perhaps patience, are rapidly depleting resources. Common criticism of Tears of the Sun are that it’s too surface, too stoic, even too silly – but despite a few emotional misses, I think Fuqua delivers Willis up just fine in this rain-soaked, emotionally taxing depiction of Nigerian civil war.

Hostage (2005): I rediscovered this completely solid thriller and I’m happy to spread the word. If you’re watching it with overly cynical eyes – like I might have been guilty of for the first few minutes – it might seem overwrought or melodramatic. The worst offender is the score; it’s over-the-top and more suited to a superhero epic. But Hostage starts with – wait for it – a hostage situation, and while it’s merely a set-up for the bigger picture, the tension kicks right in and Willis, as a veteran negotiator, does some Serious Acting right off the bat. Once I let myself get taken into the story, I was able to appreciate the weight of it, and Willis playing a tough character with emotional depth in the middle of a hair-trigger situation was something to see. Director Florent Siri, whose background to that point was largely in the Tom Clancy Splinter Cell video games, is able to get a real performance out of Willis while also navigating lots of gunplay, Molotov cocktails, and shadowy figures with conflicting motives. Watch for Hell Or High Water’s Ben Foster in a supporting role as a long-haired romantic type with a psychopathic streak.

Alpha Dog (2006): Speaking of Ben Foster, dude is absolutely bonkers in Alpha Dog. He carries the first half of the film with spittle flying and veins bulging as an addict whose younger brother is kidnapped by a dealer he owes money to. Emile Hirsch is that dealer, Johnny Truelove, a wholly unlikeable bag of douche, and Willis plays his connected father in a small role. The events are based on the story of Jesse James Hollywood, but watch the film before you Google for the best viewing experience. Foster ravages each of his scenes in the beginning half of the film, and Justin Timberlake and Anton Yelchin, as a henchman of Truelove and the brother, respectively, turn the second half of the movie into the most miserable buddy movie you’ll ever see. The kidnapped brother is taken in with affection by Truelove’s group of cronies, and he chooses to hang out with them getting high and playing video games instead of taking the opportunities he has to return home. Willis growls to the camera in an interview segment that bookends the film, and his few scenes let him posture with both his criminal son and his drunk of a father, played by Harry Dean Stanton. Despite being the titular character and the mastermind behind the kidnapping, Hirsch’s Truelove feels like he’s playing second fiddle to the heavy lifting done by Foster, Timberlake, and Yelchin. It’s heartbreaking to see Yelchin work here, playing the vulnerable brother with such grace and honesty. He’s all boy and baby fat in Alpha Dog, a far cry from the wired angles and strength of his character in Green Room.