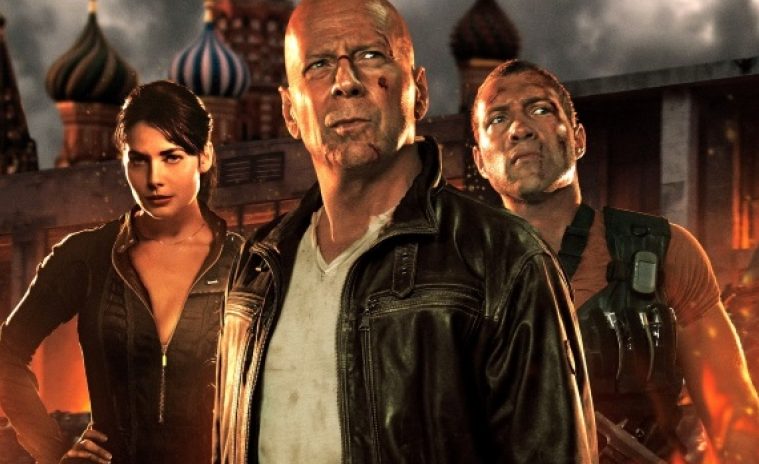 In Defence Of… ‘A Good Day To Die Hard’

Ever see an action movie you absolutely love, but know almost no one else in the world feels the same way? I feel that way for several movies. ‘Speed 2: Cruise Control’, ‘Godzilla’ (1998), ‘Indiana Jones And The Kingdom Of The Crystal Skull’, the ‘Transformers’ movies, ‘Terminator 3: Rise Of The Machines’ etc… I adore all of those movies. And here’s another to add to that list, ‘A Good Day To Die Hard’.

It’s been over 30 years since Bruce Willis donned that legendary vest and gave us one of cinema’s greatest action heroes, John McClane. Since the first ‘Die Hard’ movie took the world by storm, we’ve had 5 movies in the series. Each with different stories, villains and locations, the franchise has constantly tried to outshine any other action franchise around. And for the most part, it has. Sadly, the sequels have rarely been met with the same love given to the original. And while I love them all very much, even I would agree that each movie has its failings. Excluding ‘Live Free Or Die Hard’, which I absolutely adore. That picture is perfect to me, the unrated cut more so. But never has a John McClane movie been battered to a pulp quite so much as ‘A Good Day To Die Hard’. It has its problems, some big, some small. But I feel someone must stand up for this movie and get some real truth out there.

‘A Good Day To Die Hard’ is awesome. That’s a good place to start. When that magical first trailer hit, my excitement hit insane heights of glee. It just looked like an absolute blast. And it was. And is. Bringing back an action hero for a 5th outing in a series spanning 25 years is no easy feat. And trying to bring something new to the table is even harder. The writers couldn’t do America again. They couldnt do a cash robbery again, even though ‘Die Hard 2’ did break away from that. And they couldn’t just throw McClane into another hostage situation. So instead, they tried to be clever and create something new. McClane in Russia. With his son. Trying to save the world from nuclear terrorism. And for me, that totally works. It’s new, it’s fun, and Jai Courtney as Jack McClane is a joy. The fun between Bruce Willis and Courtney onscreen is terrific, I can’t be convinced otherwise. The clash of bad attitudes, the sour hatred of a son for his father and the eventual partnership of ass-kicking is the cornerstone of this movie.

Some people instantly rush to question someone’s love for a movie, believing they’ve temporarily lost their mind. But that’s not the case here. I will not for a second claim ‘A Good Day To Die Hard’is perfect. It is not. It’s too short, the goofs are sometimes distracting and the lead villains are absolutely dull, aside from the magnificent Yuliya Snigir, who is terrific. And perhaps to some, the demand for suspension of disbelief is too strong. The heroes and villains in Chernobyl, somehow unaffected by the nuclear ray, and at one point, the villains have a spray that temporarily protects them? Totally silly. But this is Die Hard! Should I list the countless silly and unimaginable things that happen in the previous movies? Or will we just take this fun, dumb, movie for what it is? ‘A Good Day To Die Hard’is absolutely silly. There’s no question. And even having 2 chopper scenes so alike is a mistake. But does that add up to a bad movie? Certainly not. Not to the extent that this movie has been slammed, at least.

For the goofiness of an action movie, sometimes we forget that we’re supposed to be having fun. Yes, there are goofs across the board, as there is with most movies. Yes, it’s underwritten and the male villains are useless. And like I said, it’s a little on the short side. But has anyone besides me noticed all the awesome stuff? The action scenes are incredible. The opening chase is something I’ll never forget seeing at the cinema. Fast, frantic and beautifully shot, it’s a marvelous action scene. The goofs are silly, but if the king of action filmmakers Michael Bay can have , then the brilliant Irish director John Moore can. The two chopper scenes are also breathtaking. The stunt with McClane being thrown from a chopper through a window borders on orgasmic. I saw this movie on ing day and still remember the gasps from the cinema audience for that shot. And in between the action scenes, the comic relief of the McClanes is fun to watch. They bounce off each other so well. And even the interaction with the villains provides some fun. Yuliya Snigir is especially fun to watch. Tough, sexy and deadly, she brings a lot of fun to the movie. It’s a shame we live in such a PC world where her suit change from the trailer ended up on the cutting room floor (It doesn’t even feature in the superior extended version). There isn’t a movie fan who didn’t love that shot in the trailer. The special effects are also top class, with brilliant injections of craziness in the action scenes. I’m also personally a fan of the frenetic editing on this movie. ‘Die Hard’ meets ‘Jason Bourne’. ‘A Good Day To Die Hard’ has failings, but a lack of thrills isn’t one of them.

For all the action movies I love, there are good things and bad. But the important thing to remember is if there’s more good than bad, then it’s not a bad movie. It’s a good movie with bad problems. And ‘A Good Day To Die Hard’ is a good example of that. Who cares about a few goofs, a couple of boring (Name all the truly great Die Hard villains?) and some silly plot points when we have great action, fun heroes, Yuliya Snigir and also a Rolling Stones masterpiece, Doom And Gloom, to end the picture in rocking style? A flawed movie, to be sure. The weakest of the series, yes. But oh so much fun for this action movie fan!