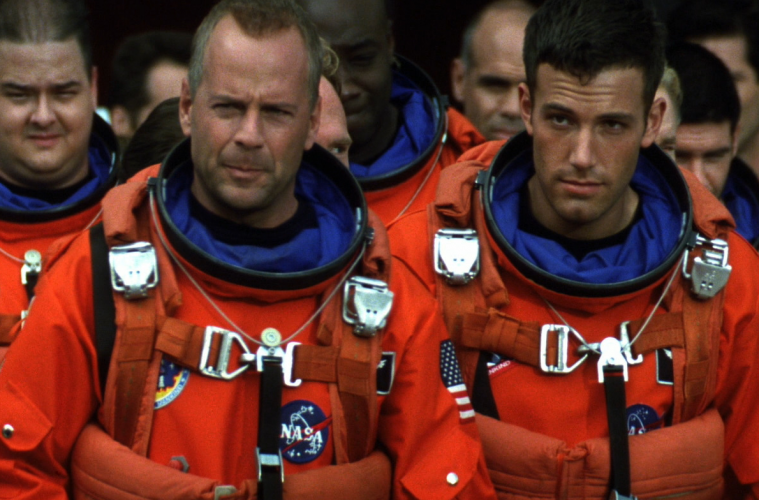 2017 marks year thirty in Bruce Willis’ filmography, and with a number like that, there’s some serious variation to be found in genres, roles, and of course, quality.

I’ve been tasked with taking a closer look at what Bruce Willis has done over the years, and I’ve divvied up that massive filmography into delicious Action A Go Go themed chunks. Here’s part three of our ongoing series. You can see part one HERE, and part two HERE.

12 Monkeys (1995): At the end of the 90s and the beginning of the aughts, 12 Monkeys was a movie I likened to The Boondock Saints or Fight Club or The Matrix: most of the dudes I knew were borderline obsessive about it. Knowledge of it was a litmus test for coolness, and there was mystique around its real meaning, and whatever that was held major resonance for them. I assumed it was some hyper-masculine sci-fi thing and didn’t go out of my way to seek it out, though I was force-fed a viewing of it one night in college that I dozed through and remembered none of when I revisited it recently.

12 Monkeys time-hops from a dystopic future to two points in the past: 1990, six years before the virus that sends humanity underground is unleashed; and 1996, right as things are getting dicey. Willis is the unwilling time-traveler Cole, a convict who is forcefully volunteered to go back in an attempt to find information to help prevent the disease from wiping us all out. The scientists sending Cole back don’t have the time-travel thing quite down yet, and their mistakes land him in the middle of a war, committed into a psychiatric hospital, and completely mentally scrambled about what’s real, what’s happened, and what’s right now.

With a script that doesn’t let things get too murky for the audience even as Cole flounders, it’s easy to keep up between realities. He crosses paths in each of the pasts with a psychiatrist, played by Madeline Stowe; and a deranged activist, Goines, that got Brad Pitt nominated for an Academy Award. Where Cole is traumatized, and desperate to be believed, Goines is fully confident of his mind, and each of his proclamations leads to another, manically emphasized by a physical performance that’s hypnotizing. Like Tyler Durden, there’s enough of that peeking-behind-the-curtain-of-reality in Goines’ monologization that makes the fascination of those guys I knew make sense. Maybe it was the first crumbs of a clue that the life we lead is not the life that everyone else leads, and, in the plainest, most bleak definitions possible, life isn’t always what it seems.

Pitt may have been the award-bait, but Bruce gives one of my favorite performances yet. There’s a scene early on in the film that sealed it, when Cole is first sent back to the wrong time. Huddled in a cell, shaking, and otherwise embodying an abused dog, Cole struggles to make sense of what’s happening – both inside of his brain and out. As Stowe’s doctor gently questions him, we get to see Willis playing as vulnerable as it gets. Cole isn’t reacting to a loss or stressed about the bad guys he’s got to take down – this is pure, internal anguish, and it hurts.

I had in my head that it was bright and flashy, set on an Earth of the future, and it was. But it was also grimy, and surprisingly low-budget-looking, yet still packed with aliens and spaceships and special effects shots that have mostly aged well. A $90ish million budget isn’t chump change, but the production looks a little rough around the edges. Don’t get me wrong, it doesn’t look cheap. It’s somehow futuristic looking and anachronistic. Archer in orbit, or maybe Mad Men on the moon. I loved the unevenly sewn costumes, the bumpy makeup, the practical aliens and their rubbery faces. Nothing looks as good as something you can reach out and touch, even when it’s imperfect.

The Fifth Element has the sheen of the mid-nineties all over it, and seeing it now, 20 years past my – er, its! – prime, was comfortable the same way seeing Strange Days for the first time earlier this year was. The nineties version of the future was no more accurate than the seventies version of the future, but having lived through the nineties made it feel familiar. The supporting cast is dotted with faces that defined the nineties: Luke Perry, Tricky, and true supermodels, perhaps thanks to the Jean Paul Gaultier designed wardrobes.

What I expected was a cold space opera, not that distinguishable from any other. What I ended up watching was so warm, and funny, as sweet for the eyeballs as it was for the soul. It’s hard not to feel like I wasted time not having The Fifth Element in my regular movie-watching rotation.

Armageddon (1998): Maybe if The Fifth Element had also starred Ben Affleck, I would have seen it opening night the way I first saw Michael Bay’s raging ball of tear-jerkin’ fire. I’ll be honest, as the credits rolled that first time, teenage me felt an unplaceable disappointment. I liked it, but… Something felt missing. In subsequent years, that feeling has mostly faded, and my view of Armageddon has shifted thanks to multiple viewings on VHS, television, and during video store shifts. Whatever was missing in that first go-around has been filled: by the palpable emotional manipulation of the script, the talent studded through the supporting cast, or maybe by the sweet, sweet, Criterion validation. It’s overlong, and there’s plenty to poke fun at about it, but Bruce gets to be another version of the funny, tough hero that we love him to be. In space!