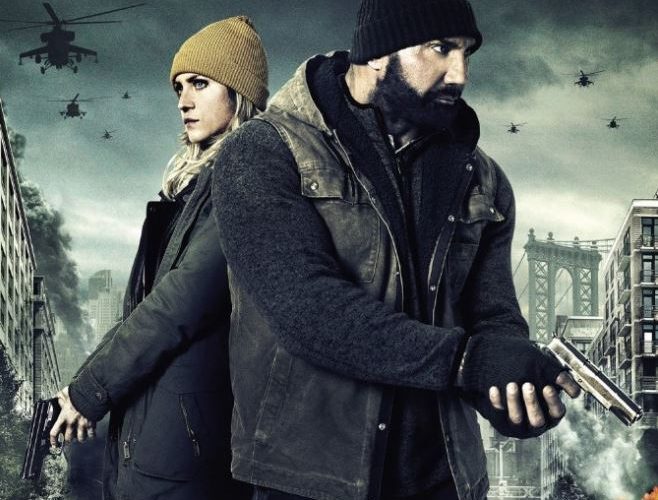 The action subgenre of “urban survival” is one of my favorites. From comics like DMZ to low budget classics like ASSAULT ON PRECINCT 13 — the concept of turning American cities into war zones is equally terrifying and captivating at the same time. Which is why I’m more than a little excited to catch BUSHWICK in theaters this weekend. BUSHWICK is the newly released Dave Bautista/Brittany Snow thriller where The South makes good on its promise to rise again. As Texan military forces make an aggressive push through New York City, it is up to Snow and Bautista to survive what was once their neighborhood.

As I mentioned earlier, I haven’t caught this one yet, but our very own Shack House managed to review the score pre-release. It comes to us courtesy of underground rap artist Aesop Rock, and it totally embodies his sound despite the absence of Aesop’s exceptional lyricism.

If you’ve never checked out Aesop Rock then you totally should. He’s one of the few acts still doing interesting things in a genre (hip hop) that seems to be rife with copycats. As for the BUSHWICK soundtrack, it’s available to purchase now. If you like what you hear below then definitely scoop it up. Similar to Aesop’s rap act, it’s a unique approach to soundtracks that shouldn’t be ignored.