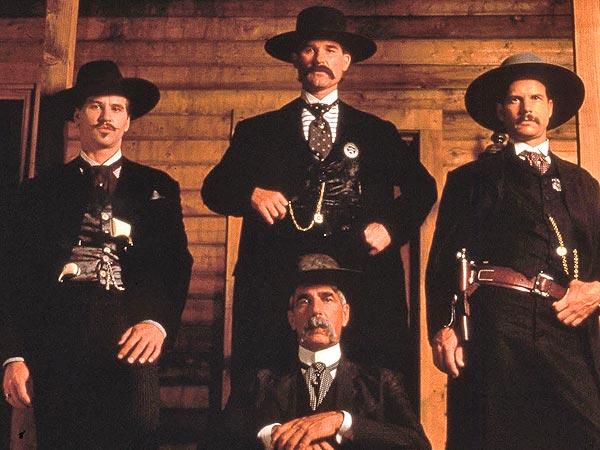 I recently discovered one of the great movies of the 1990’s. It’s one of those movies I was aware of but had never actually watched. That movie is TOMBSTONE (1993), a star-studded spectacle that represents the zenith of the great American Action movie art form known as the “Western.”

The film chronicles the life and times of Wyatt Earp (Kurt Russell), who famously went to the town of Tombstone, Arizona to live out the rest of his days as a retired lawman in peace and (somewhat unlawful) prosperity. That get’s ruined when a gang of known as the “Cowboys” get’s out of hand and a blood feud quickly emerges between Wyatt Earp’s posse and the worst the Cowboys have to offer.

Starring Kurt Russell, Val Kilmer, Bill Paxton (R.I.P), Sam Elliot, and host of others this film is a tour de force of 90’s acting talents. But it is Val Kilmer as Doc Holliday who steals the show, closely followed by Michael Biehn as the murderous Johnny Ringo. Throughout the movie, Ringo is built up as the ultimate cowboy bad ass out for Earp’s blood but it is ultimately Holliday who goes up against Ringo in a duel to the death.

Taking Kilmer’s whole performance into account it is clear that he was robbed of an Oscar nomination that year, but that is beside the point. This is one gem of a moment in a movie that is soulful, action-packed, and definitely worth watching.