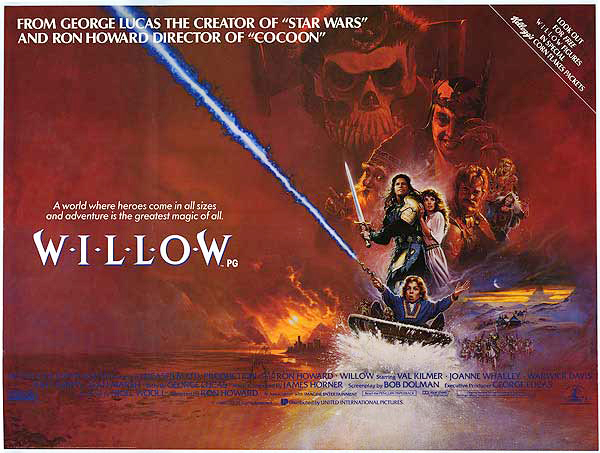 GREAT MOMENTS IN ACTION HISTORY: Before There Was Lord Of The Rings There was Willow

Well, technically that’s not true. The Lord Of The Rings books came out long before Willow hit theaters in 1988 to satisfy everyone’s need for live action fantasy. But if you look closely at Willow and sniff hard enough you wouldn’t be fooled if the same proverbial chef made both dishes.

Produced and written by George Lucas and directed by Ron Howard, the story for Willow is simple. Involving a dwarf charged with protecting a baby that is destined to dethrone the evil queen. Our diminutive hero is played by Star Wars alum Warwick Davis as the title character. The film also co-stars Val Kilmer as the wayward warrior Madmartigan.

For the film buffs out there, Willow is notable for being the first movie to officially use computer generated effects. For that reason, the movie not lacking in talent or ambition. While it might not have been as successful at the box office as others, it is a very fun ride.

What follows is a bit spoiler-filled. Although, it could be argued that said spoiler makes no actual sense when taken out of context. It is, however, an incredible technical achievement that features one of the best dragons ever put to film.

I hope you enjoy this movie as much as I do.