Netflixing Under The Influence: The Annihilator 2000 Is Inappropriately Forced Into BEVERLY HILLS COP III (#ChooseYourWeapon)

I have a very long list of movies in a Google Doc which seem ripe for consideration in the Netflixing Under the Influence feature.  When scouring through to make a shortlist for our #ChooseYourWeapon event I had a sudden flash of memory.  Wasn’t there some weird, futuristic weapon in the oft-reviled Beverly Hills Cop III?  I specifically remember feeling a sense of anger at the time after seeing such a goofy science-fiction premise popping up in the otherwise typically grounded series about a fast-talking police officer from Detroit showing the upper crust of L.A. what’s what.  Off to Netflix.com!

Man!  Remember when orchestra hits were all over the place?  Those were the days!  And it’s at an amusement park, no less!  As I’m sure we all did, when I was a kid I would always fantasize various action movie scenarios.  I even had a trilogy of Die Hard knock offs in my head starring myself.  The first film wore its influences on its sleeve as it was set in a high-rise building.  However, the follow-up took place at the Grand Canyon and the second sequel took place at an amusement park.  Well, John Landis, you have quite the uphill battle to climb in making your similar action movie as good as the one I imagined.  If it doesn’t include a guy getting cut in half by a giant circular saw on a log flume ride, you’re already losing points.

Watched this streaming, but it was #2,014 on my queue.  Drank quite a few Brooklyn East IPAs from Brooklyn Brewery while checking this flick out.  The beer has a pretty substantial bittersweet hop snap on the tongue.  The flavor definitely fills your mouth, but it’s not as earthy or strong as most IPAs.

I also had never seen Tony Scott’s Beverly Hills Cop II before watching this, so I more or less had a back-to-back BHC (abbreviation time!) sequel viewing party by myself.

Everyone’s favorite sassy police officer, Axel Foley (Eddie Murphy), is setting up his team to take down a chop shop in Detroit.  Unbeknownst to him, however, it seems that the fairly pedestrian chop shop has been violently overtaken by a group of high-class criminals sporting machine guns.  Too bad, because he explicitly denies the offer to call in the SWAT team from his commanding officer Inspector Todd (Gil Hill).   This leads to the death of Inspector Todd and, like every other Beverly Hills Cop movie, has Foley traveling to California to investigate the shooting of someone close to him.

If you’re wondering why nobody besides Foley is more concerned that a high-ranking officer in the Detroit police force has been murdered, it’s because the FBI (represented here by fantastic character actor Stephen McHattie) is investigating the bad guys for their role in a major counterfeiting ring.  So Axel Foley and his theme song head to L.A. County to do some personal investigating after a lead on the killers’ car points him to his old stomping ground. 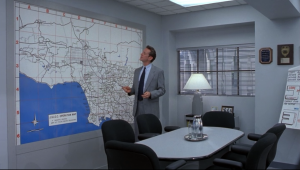 Of course he meets back up with Billy Rosewood (Judge Reinhold) who has now become a by-the-book parody of the character he played in previous movies.  Rosewood heads up a division that literally just stares at a map and decides who has jurisdiction and nerdily yells a lot.  It’s a shame, because Rosewood has always been a cool character.  He’s a total square, but he’s game for anything in a way that’s pretty fun and believable.  In Beverly Hills Cop, he’s just really into the whole idea of danger and being a tough cop like on tv.  In Beverly Hills Cop II he became a bit more 2-dimensional in that his major character trait became “really into guns,” but it was still funny.  Here, however, he’s just kind of an idiot.  Judge Reinhold’s broad performance doesn’t help the afterthought they made his character, and it’s by far the biggest disappointment of this sequel

Speaking of the old movies… where is John Ashton as John Taggart and Ronny Cox as Andrew Bogomil?  Well, the unflappable, hard-nosed cop and his smart, but no-nonsense superior couldn’t be bothered to make it to this mess of a movie, so the characters were combined and replaced by Hector Elizondo as Jon Flint.  Foley tracked a stolen credit card linked to Todd’s murder to Wonder World, a thinly veiled Disney Land knock-off filled with Cylons, anthropomorphized animals, and George Lucas. 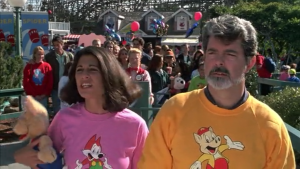 Flint knows the head of security there, so recommends Foley talk to him.  However, it turns out the head of security (Ellis Dewald, played by Timothy Carthart) is the same guy who killed Inspector Todd.  Twist!  His boss at the park is a philanthropist named Orrin Sanderson (John Saxon).

Obviously, there is something rotten in the state of Wonder World and Foley discovers the whole place is corrupt, outside of Walt Disney stand-in Uncle Dave (Alan Young) and an aggressively shoehorned romantic interest in park employee Janice (Theresa Randle).  The corruption goes up to Sanderson who is using a shutdown ride as a base of operations for his U.S. currency counterfeiting empire.  As the mystery unfolds, Foley and Rosewood run into Serge (Bronson Pinchot) from the first film who awkwardly explains how he has moved from the art gallery business to the gun-selling business because of course he has.  This is where the gimmicky joke of The Annihilator 2000 is introduced. 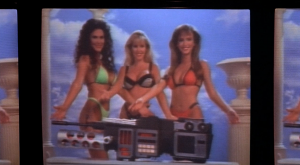 It’s a gun that also has a cd player and a microwave!  Because the best way to satire consumerism is through unbelievable plot machinations that lead to a flamboyant foreigner selling something with ludicrously unnecessary accessories.

The Annihilator 2000 is one of a few technophobic, “get off my lawn” jokes in the film.  At one point, an automated gate at the police precinct gives Foley some trouble.  Later, Rosewood goes through a complicated, laugh-free explanation of his big electronic map that tells him who has jurisdiction when a crime is committed.  Towards the climax (in a case of Chekhov’s Annihilator 2000, I guess), Foley uses the superweapon against some henchmen only to have it play music and harmlessly shoot a net at their feet.  Oh, lordy!  Computers are so complicated and dumb!  None of the “I don’t understand computers” elements even pay off in any meaningful way.  They are just throwaway jokes left to thud lifelessly on the audience’s faces. 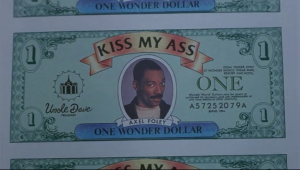 What this movie is really missing is Foley’s charm.  In the previous films he cons his way into any situation, even illegally squatting in some vacationing rich guy’s house in the second one.  The whole snobs vs. slobs aspects we would normally be seeing are left to the wayside for shenanigans that are plot-driven as opposed to character-driven, which really betrays what sets the BHC franchise apart from other action-comedies.  Only the scene at a charity dinner where Foley jumps on stage during Dewald’s award acceptance speech provides the slightest touch of the devil may care attitude that audiences grew to love in the other movies.  The unbelievable “love at first sight” romance with Janice is a pretty telling microcosm of how little anybody involved in the movie seems to care about what made Axel Foley interesting in the first place. 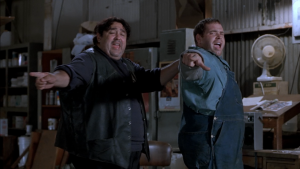 There are some comedic elements that really go off the deep end here, which makes Beverly Hills Cop III feel even more unrealistic than its predecessors.  In the opening scene, before the villains attack the Detroit chop-shop a very Landian (John Landisesque?) musical intro occurs.  A group of mostly overweight, blue-collar dudes (and Al Leong!) dance around and sing along to “Come See About Me” by The Supremes when it comes on the radio.  It’s silly and a bit derivative of Landis’ own use of that juxtaposition in the dance scene to “My Little Buttercup” in the sordid Mexican bar from Three Amigos.  However it’s still pretty darn funny.  That being said, it’s incredibly indicative of the inconsistent tone through the movie.  The only saving grace is that it occurs over the opening credits.  If the wackiest part of the film was the intro, then it would merely have served as a humorously unexpected pip to start everything off.  Unfortunately, this is just one of many jarring comedic bits, most of which never quite land.

Speaking of which, as the movie limps forward, this tonal disparity starts to become more of an issue.  Typically I am forgiving of (and sometimes even prefer) movies that are tonally dissonant.  Careening wildly between comedy, melodrama, and action is a fun experience for me, even if it apparently gets others up in arms.  I don’t know what the Hell is going on in Beverly Hills Cop III, though.  After the goofy musical intro, Inspector Todd dies in a somewhat emotional moment.  Then Axel Foley pursues in a chase scene where he viciously drives over a guy and makes a comical cringing face.  It’s oddly strange.  Is this funny, brutal, or dramatic?  Even by the end Foley, Rosewood, and Flint are collapsed on the ground while covered in blood from multiple gunshot wounds.  I’m pretty sure Rosewood falls unconscious… and they all laugh. 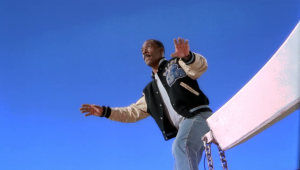 There’s a seed for comedy there, or even satire about the near invincibility of many action heroes.  But I’m not sure that’s what’s going on here.  Everyone on the screen is laughing for some reason, which is telling because nobody in the audience is at this point.

A big issue is the direction of the previously solid John Landis.  Three Amigos, The Blues Brothers, Coming to America, and An American Werewolf in London all rank amongst some of my favorite movies.  Here, however, everything is filmed with an oppressively bright lighting scheme in stark contrast to Jeffrey L. Kimball’s noir-ish lighting schemes used in Beverly Hills Cop II and Bruce Surtees’ more straightforward approach in the first one.  This and the often static camera seem odd for an action film, which looks more like a made-for-tv comedy than anything else.  A scene where Foley rescues some children from a malfunctioning ride continues to use strange angles that make the setpiece look incredibly cheap and the whole sequence lack danger.

Beverly Hills Cop III is not a very good comedy and it’s an even worse action movie.  As for it comparing to the movie I envisioned in my head with a child… nobody got sawed in half, there was no fight atop a running roller coaster, and nobody was electrocuted by bumper cars.  For shame, Beverly Hills Cop III.  For shame.

All images courtesy of Paramount Pictures