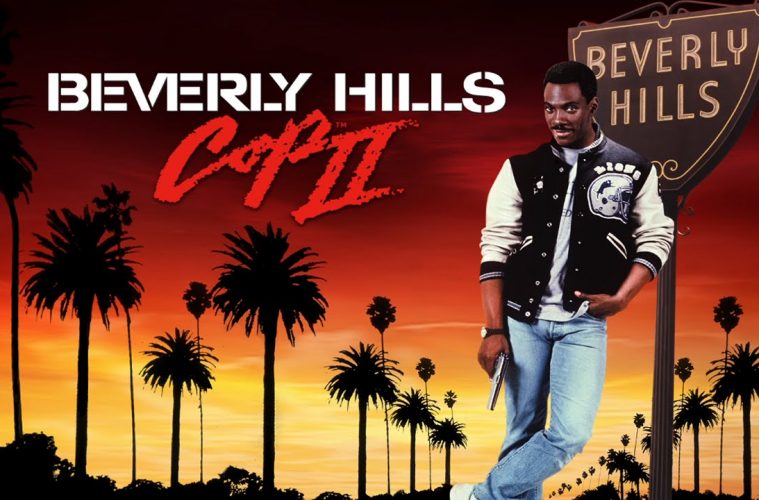 THE NIGHT SHIFT: IN DEFENCE OF BEVERLY HILLS COP 2

My dear readers, I recently discovered something terrible. Something heinous. Something that shocked me to my very core. It came to my attention that some people think that Beverly Hills Cop 2, sequel to the 1984 action comedy classic Beverly Hills Cop and one of my all time favourites, is a bad movie. This was so amazing to me that I decided to look into it further. No, I thought, surely I can’t be in the minority in loving Beverly Hills Cop 2, can I? A quick Google search only served to confirm my fears, I found review after review that slated my cherished childhood classic. Even Roger Ebert only gave this movie one star, ONE STAR! I was dumbfounded.

Well, this cannot be allowed to continue. While people are, of course, perfectly entitled to go about their lives being this wrong about something it seems somewhat unfair to not give them the opportunity to be corrected. And so the responsibility falls upon my shoulders to write a defence of Beverly Hills Cop 2. 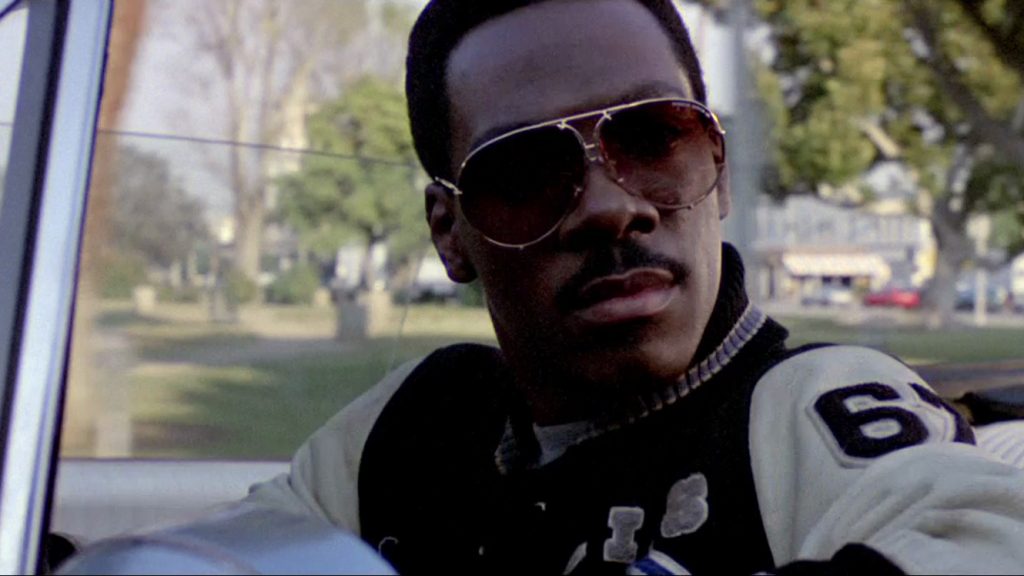 Beverly Hills Cop 2 sees the return of Eddie Murphy as streetwise Detroit cop Axel Foley, as he once again travels to Beverly Hills after the shooting of his friend, Police Captain Andrew Bogamil (Ronny Cox) Axel is reunited with detectives Billy Rosewood (Judge Reinhold) and John Taggart (John Ashton) as the trio investigate a series of robberies dubbed ‘The Alphabet Crimes’ after the monogrammed notes left by the criminals at each crime scene. The investigation is complicated by internal political matters within the Beverly Hills Police Department, and Rosewood and Taggart are close to losing their jobs. Masterminding The Alphabet Crimes is businessman and wannabe arms dealer Maxwell Dent (Jürgen Prochnow) aided by his lieutenants Karla Fry (Brigitte Nielsen) and Charles Cain (Dean Stockwell) Tony Scott (Top Gun, Crimson Tide, The Last Boy Scout) takes the director chair and so, as you’d expect, the action is bigger, faster, and slicker.

To address the criticisms of Beverly Hills Cop 2 we first need to understand what it was that made Beverly Hills Cop work, how/why the sequel deviated from that formula, and why those deviations were necessary. 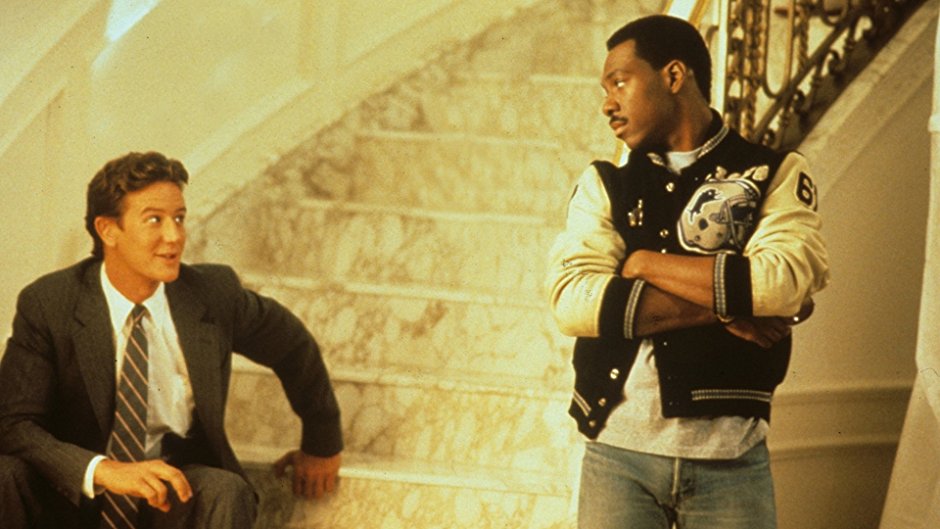 Beverly Hills Cop is meant to be a classic fish-out-of-water story, the young underdog street cop trying to manoeuvre his way among the rich, pampered Beverly Hills elite. The surface idea is that the shallow, vacuous banality of Beverly Hills is wholly unprepared to deal with Foley’s smart mouth Detroit attitude, and Foley is out of place in the uptight, besuited political climate of the Beverly Hills Police Department. However it’s actually a little more complicated than that. Axel Foley is not just street smart, he is rebellious, and has a reputation even among his Detroit police peers for doing things his way. The usual fish-out-of-water narrative consists of taking someone who is confident and comfortable operating within one environment, and dropping them into completely different surroundings. The amusement comes from their discomfort at trying to adjust to their new situation. That’s not really the case with Axel Foley, since his comfort within the Detroit Police Force is somewhat questionable. Though Axel Foley is charming, and a fast talker, he is for the most part a loner. His working relationships are mostly strained, his peers avoid him, and his Police Chief is on the verge of firing him. Foley is out of place even on his home turf.

What he does have is a buttload of confidence. The amusement in Beverly Hills Cop comes not from Foley struggling to adjust to Beverly Hills, but from their inability to adjust to him. Foley arrives in Beverly Hills like a grinning, quip-laden tornado, leaving a trail of bewildered locals in his wake. Taggert and Rosewood in particular follow Foley’s antics with a kind of exasperated awe, which later develops into friendship and mutual respect.

In many ways Axel Foley in the Beverly Hills Cop series is an allegory for Eddie Murphy’s own career. After starting out in stand-up comedy, and graduating onto Saturday Night Live, Brooklyn born Murphy attempted to make the jump to Hollywood, starring with Nick Nolte in buddy action comedy 48 Hrs. The following year he starred in Trading Places with Dan Akroyd. Beverly Hills Cop was Eddie Murphy’s first solo starring role, and it catapulted him to stardom. The movie was originally conceived as a straight action movie, with the leading role originally offered to Mickey Rourke. During the various rewrites and script revisions Rourke pulled out, and the idea was re-imagined as a vehicle for Sylvester Stallone. Stallone hastily rewrote the script as a gritty, violent action drama, but the studio rejected many of his ideas because they would cost too much (he would later use these concepts for the movie Cobra)

Stallone left the project just 14 days before filming was scheduled to begin, and Eddie Murphy was persuaded by the film’s producers to replace him. The script was once again revised, injecting Murphy’s trademark fast talking wit and penchant for creating comedic characters, and filming began. Just imagine it, a working class comedian with a couple of movie roles under his belt but still looking for that final push into Hollywood. He gets a phone call, and 12 days later he’s filming the movie role that would define the larger part of his career. That’s got to have been a pretty heady experience. The last minute script revisions mean that nobody had much time to create a character, and so they just inserted Eddie Murphy and relied upon his natural charm to carry the film. Foley IS Murphy, the wise cracking underdog suddenly thrust into the beautiful but often artificial edifice of The Golden State. 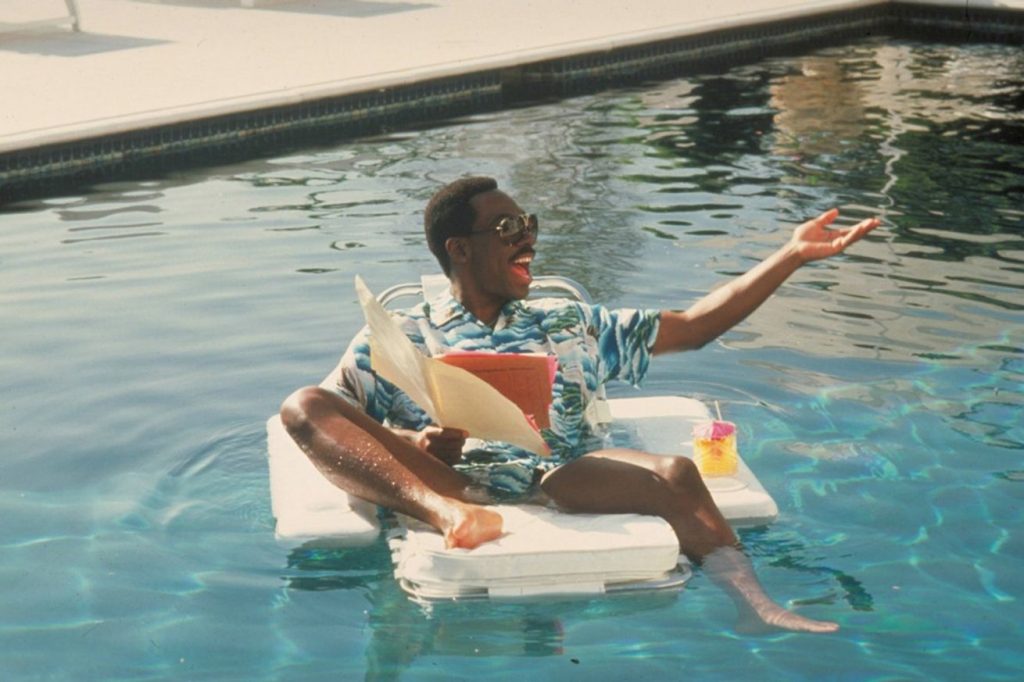 So then we come to one of the biggest complaints about Beverly Hills Cop 2, the first being that Axel Foley has become an arrogant and unlikable jerk who spends most of the movie yelling and tricking low level employees. Another complaint is that the humour no longer comes from a clever and witty script, instead they just throw Murphy in and expect it to be funny because he’s there. However, I actually view Foley’s attitude in Beverly Hills Cop 2 as a plus, and part of the natural progression of Foley’s character. If they had tried to make the same kind of story as the first movie it would not have worked.

In the timeline of the movies two years have passed since the events of Beverly Hills Cop. Neither Foley or his companions are the same as they were before. The fish-out-of-water story element no longer exists since it is indicated, through photographs and references to fishing trips, that Foley has spent time with Rosewood, Taggart, and Bogamil outside of police work and that they all consider each other friends. Foley is comfortable with them and, more importantly, THEY ARE COMFORTABLE WITH HIM. Taggart and Rosewood are no longer idle spectators that trail behind Foley while he does his thing, they work with and even actively enable him. They take him to the police station to examine the evidence of the first robbery even though they know that may get them fired. Rosewood gives Foley his bag of vitamins to use to get into the Beverly Hills Gun club, and later when they go back they actively assist him in breaking in. Though Taggart and Rosewood may at times express disbelief in how far Foley is willing to go they know that his methods often get results, and are willing to accept the risks that Foley’s intervention brings. Foley is used to working alone, and being somewhat at odds with his colleagues. In Beverly Hills Cop 2 not only does he have a personal stake in the investigation, as he did in the first movie, he is now comfortable in those surroundings, and accepted by his companions. 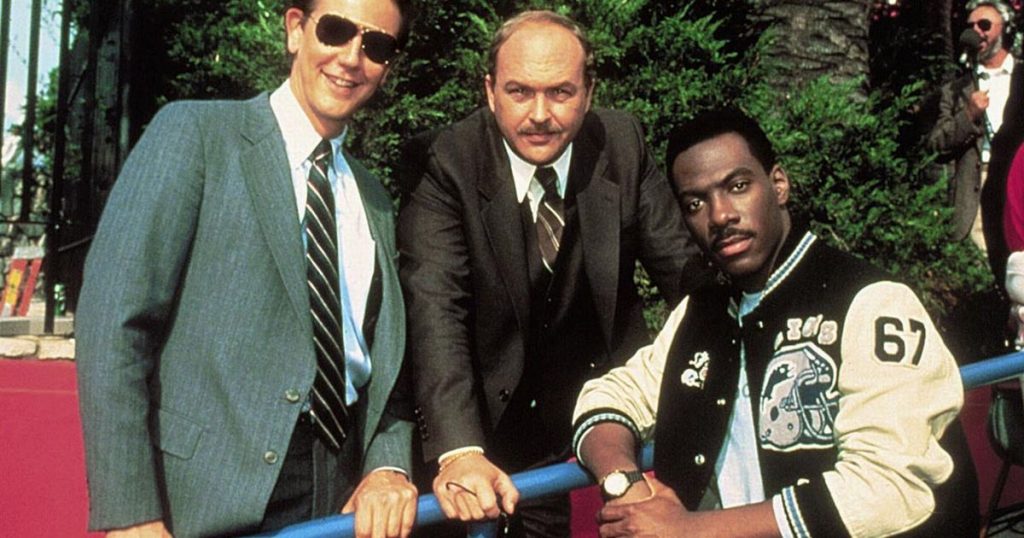 As in the first movie, Foley’s attitude may be in some part be explained by Eddie Murphy’s career status at the time of filming. In 1987 Eddie Murphy was riding high, he had a $25 million contract with Paramount Pictures, and a commercially (but not critically) successful album which produced a no.2 hit single.  Though Murphy’s last movie, The Golden Child, was received negatively by critics, and considered a disappointment by the studio (even Murphy later referred to the movie as “a piece of shit“) it still grossed almost $80 million in the US alone. Later in 1987 Eddie Murphy would release his second feature-length stand-up movie, Raw, which to this day remains the highest earning stand-up film of all time. Murphy was hanging around with people like Rick James and David Bowie. He had made it into the big leagues, was comfortably established in Hollywood, and was rapidly becoming one of the biggest movie stars of the 80s. At this point a little arrogance was to be expected. In The Making Of Beverly Hills Cop 2 Murphy remarks that he and Axel Foley are a lot alike, and so it’s not too far a leap to surmise that this affected the movie and his performance within it.

The point is that Axel Foley was ALWAYS somewhat arrogant, that is clear from his relationships with his Detroit peers. However, in Beverly Hills Cop he was the underdog, and so his arrogance feels suitably justified since everyone is out to stop him. In Beverly Hills Cop 2 people are not trying to stop him. On the contrary, Taggart and Rosewood are actively helping him to succeed, and the underdog element has been stripped away. This may make Foley seem less likeable, since audiences love to root for the poor prospect, but within the context of the movie universe? It makes sense.

So what else is good about Beverly Hills Cops 2? Well, to be honest, I love the villains. What’s not to love? You’ve got Jürgen Prochnow and Dean Stockwell very obviously having a ball playing the cold but stylish businessman and his hapless henchman. However, the real star of the show is Brigitte Nielsen as 6ft, platinum blonde Valkyrie, Karla Fry. Right from the first robbery, yelling “Eat the floor!” at various jewellery store inhabitants, Nielsen is completely mesmerising and steals every scene she is in. Sure what the bad guys are actually doing is almost impossible to decipher (something about insurance fraud and guns) but who cares! It’s an 80s action movie! There’s witty quips, electro music, and things go bang!

And they do, repeatedly. A trademark of Tony Scott is fast-paced and slick action sequences that have a tendency towards the violent, think of movies like The Last Boy Scout and Domino and you get the picture. The thing is? That’s not really a bad thing. The action scenes are well shot and suit the energy of the story, which is more stylish and frenetic than the original. Think of it like this, in Beverly Hills Cop the heat may have been on, but in Beverly Hills Cop 2? We’ve reached boiling point. 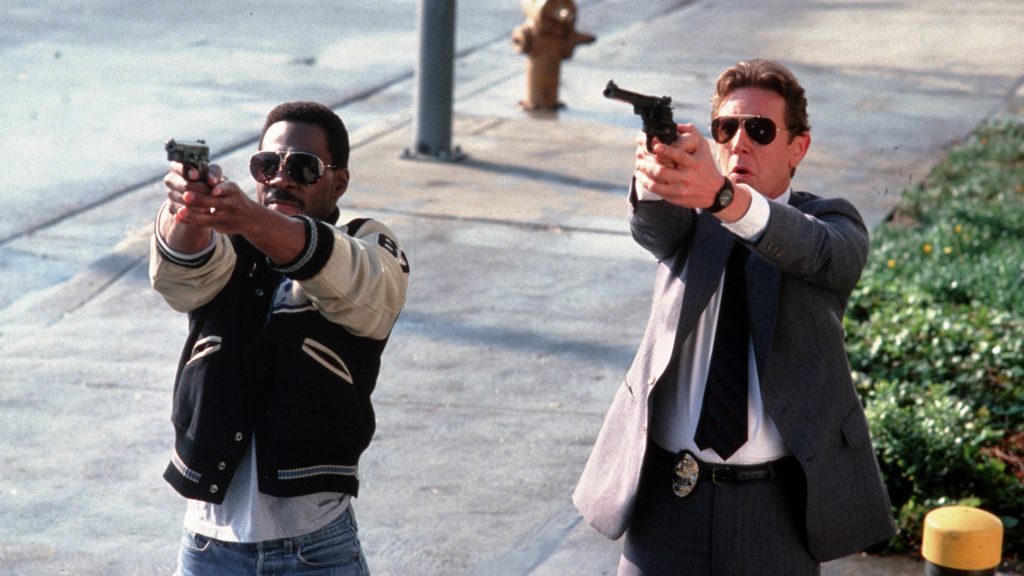