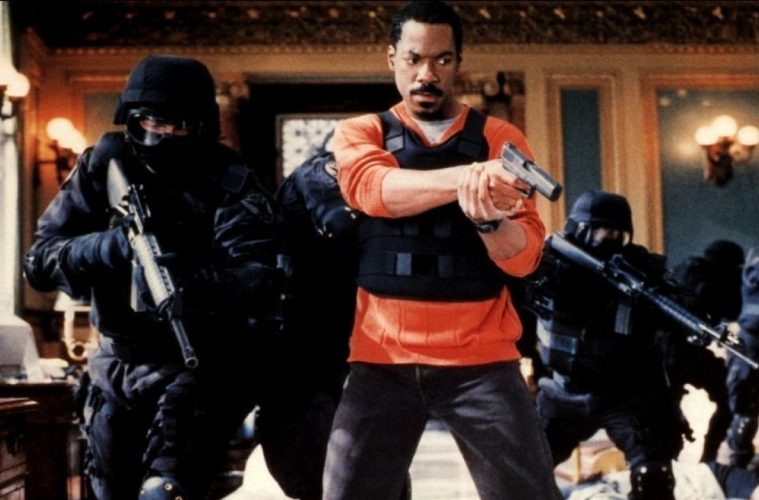 Kicking off a series of pieces focusing on the biggest and best action movies and blockbusters from 1997 is a very fun adventure in writing. Even after twenty years, 1997 still remains one of the greatest years in movie history for action cinema. Whether it be Nicolas Cage as the now iconic Cameron Poe in ‘Con Air’ and switching places with John Travolta in the John Woo masterpiece ‘Face/Off’, or George Clooney battling nuclear terrorists in ‘The Peacemaker’ and playing the greatest comic book hero of all time in the sadly hated ‘Batman And Robin’, 1997 was and still is a very important year for action cinema. So for the next few weeks, we will touch on those gems that celebrate their 20th anniversaries this year, and also many more including the James Bond classic ‘Tomorrow Never Dies’, Kurt Russell’s wonderful ‘Breakdown’ and of course James Cameron’s spectacular epic ‘Titanic’, while putting forward a case as to why ‘Batman And Robin’, ‘Spawn’ and ‘Speed 2: Control’ deserve way more love from film fans. And speaking of a movie that deserves far more love and attention, we kick this series off with the fast-paced action-packed Eddie Murphy thrill ride ‘Metro’. 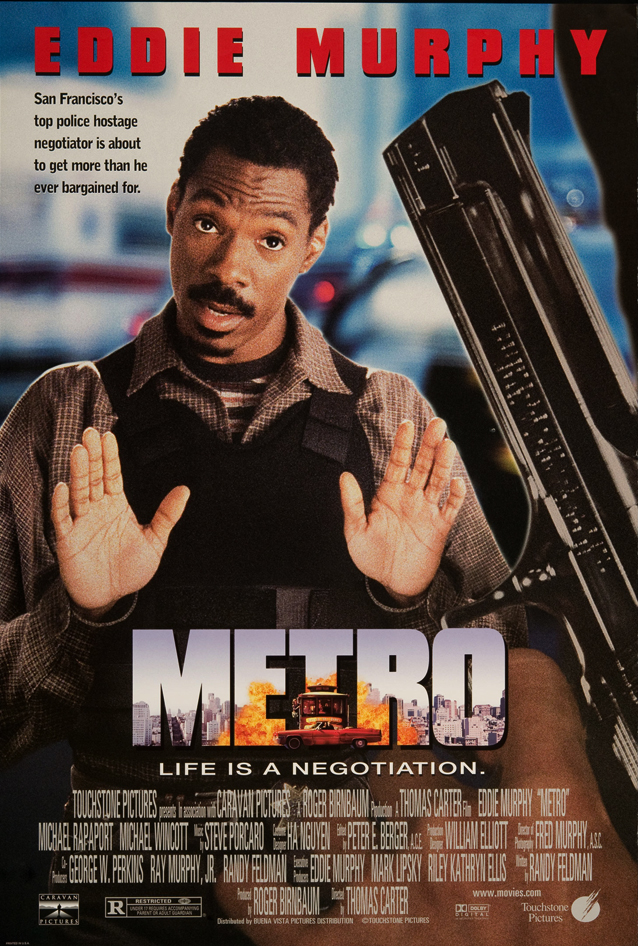 Eddie Murphy is one of those movie stars who’s appeal is universal. Every person in the world loves at least one Eddie Murphy movie. With an incredible selection to choose from, such as ‘Beverly Hills Cop’, ‘Trading Places’, ‘Coming To America’, ’48 Hrs’, ‘The Nutty Professor’, ‘Dreamgirls’, ‘Dr. Doolittle’ and of course ‘Shrek’, there is something for everyone. He’s even often horribly underrated, especially for the wonderful ‘Norbit’ and the movie I’m about to review. For all the classic movies and underrated gems delivered to us by Eddie Murphy, there has always been a major number one choice for me as both a fan of Eddie’s and a movie lover… The spectacular action thriller ‘Metro’.

Released twenty years ago, back in the glorious movie year of 1997 (Obviously), ‘Metro’ stars Eddie Murphy as Scott Roper, a fast-talking, quick-acting hostage negotiator in San Francisco. Able to defuse any problem with his wit and charm, including problems with his ex-girlfriend, Roper finally meets an opponent he can’t talk down. When Michael Korda (Played by the brilliant Michael Wincott), a mastermind jewel thief, is jailed for his latest heist and the brutal murder of a cop, Roper thinks his negotiation is over. But when Korda breaks out of a maximum security prison in search of revenge, Roper is pushed to his limits and forced into the ultimate showdown to save the woman he loves and stop the maniac killer from unleashing a spectacular new wave of crime across the city.

‘Metro’ brings together much of Eddie Murphy’s past movie career into one giant action viehcle, including touches of ’48 Hrs’ and of course ‘Beverly Hills Cop’. But as an actor, Eddie had always relied heavily on his wonderful sense of humor and comic timing. No matter the action movie or comedy, we always got the classic Eddie Murphy from the comedy clubs of America. Whether action comedy, romantic comedy or flat-out fantastic farce, the great man nailed it. And still does. But every movie star always has that one role that stands out from the rest of their career. Something they hadn’t done before. And ‘Metro’ stands as that movie for Eddie Murphy. As for the first time in his amazing comedy career, he finally played it straight. When you think of Axel Foley, as an example, you think of a funny man who does action things. But with Scott Roper, you get an action man who says funny things. And the difference is huge. Gone is the reliance on gags, the comic singing, the hilarious impersonations etc… Even the legendary flamboyance is gone. What we get here is Eddie Murphy as a full-blown action hero, who commands the screen and makes us believe that he truly capable of whupping a bad guy’s ass. While Roper holds much wit and humor, it’s very much background noise to an unstoppable cop who uses his skills on various types of criminals. And when we see Roper set out on a desperate chase across San Francisco to stop a vicious killer, instead of non-stop humor and fun shootouts, we get a whole different picture of the star Eddie Murphy really is. And that’s perhaps the biggest reason ‘Metro’ is my favorite Eddie Murphy movie, because we’re treated to something we never got from him before. The serious action star who uses humor merely as background, and not the other way around.

Having touched on the action of ‘Metro’, instantly two scenes jump straight to mind… The incredible car/ tram chase through the streets of San Francisco (See above for the first part), and the explosive and intense finale. There is much excitement in between, but those two action scenes make this a stellar action thriller. While I acknowledge the fact that the showcase tram scene is heavily inspired by Michael Bay’s ‘The Rock’ (from the previous year), there is no denying that it’s still some joyous heartpounding action magic. The blue caddilac being rammed downhill by a tram filled with passengers is still the moment that takes my breath away. And has fantastic as Eddie Murphy is, Michael Wincott’s evil performance adds so much more to it all. A spectacular chase that shows action cinema on top form. And the amazing showdown between Roper and Korda, while unappreciated by some critics, stands as another major highlight. Without giving too much away, it’s nerve-shredding and explosive. One of my favorite finales to an action movie. The thrills in ‘Metro’ are impossible to deny, even if some want to pick away at other elements of the movie. A little trivia: There is a direct-to-DVD movie starring Gary Daniels with blatantly steals actual footage from previous action movies, called ‘Epicenter’. This movie steals much of the tram chase from ‘Metro’ and splices it with close-up footage of Daniels.

One major feature of an Eddie Murphy movie is always the sidekick and supporting cast. He’s rarely alone on screen. And ‘Metro’ is no different, as now he’s partnered up with Michael Rapaport, who plays an expert sniper who aides Roper on his mission, with much humor and fun. Their scenes together are great. And playing Roper’s love interest is the brilliant and beautiful Carmen Ejogo, who blends the story together brilliantly between Eddie and Michael. She’s so good here. But up there, alongside the lead star, is the wonderful Michael Wincott, who has appeared in so many great action movies such as ‘The Crow’, ‘Alien Resurrection’, ‘Along Came A Spider’ and even starred in ’24: Live Another Day’. He is fantastic as Korda, bringing so much chill and violence to his part. And he also has one of the greatest voices ever. He’s the perfect bad guy, one of my fave movie villains.

Director Thomas Carter, who sadly never directed any more action movies, does a wonderful job on ‘Metro’, along with one of the best producers in Hollywood, Roger Birnbaum. While Birnbaum is absolutely no stranger to action cinema, Carter was previously only involved in the action genre by taking on directing duties for TV’s ‘Miami Vice’. So to see a movie like this come from him is not only surprising, but proof that studios seriously need to give him more action projects. And topping it all off is a stunning score from Steve Porcaro of legendary rock band Toto, who brings in his own special brand of kick-ass rock edge for the major action in the movie, namely that magnificent tram chase. What’s a 90’s action movie without a pumping musical score? ‘Metro’ is certainly not everyone’s favorite Eddie Murphy movie. But it is 100% my favorite. I love the majority of his movies, but this is the one I’ll always treasure most. Happy 20th anniversary, ‘Metro’!

Check back soon, as we’ll be looking at Harrison Ford’s most awesome action classic, ‘Air Force One’. Until then, check out these previous articles reviewing two of 1997’s greatest movies, ‘Event Horizon’ and ‘The Peacemaker’.