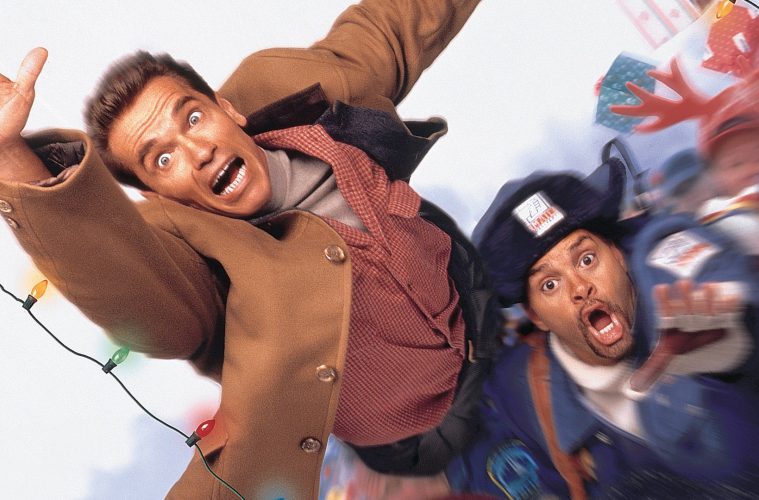 “It’s Turbo Time!” – 20 Years Of Schwarzenegger’s ‘Jingle All The Way’

1996 was an epic year for our beloved Arnie, with his smash hit action thriller ‘Eraser’ riding high on the box office. Still standing as my favorite Schwarzenegger movie, ‘Eraser’ was that year’s action injection from the iconic star. But soon after, his first holiday movie would be released worldwide, ‘Jingle All The Way’. And 20 years on, it’s still as fresh and hilarious as ever.

Schwarzenegger stars as Howard Langston, a businessman who spends much of his time working and nowhere near enough time with his family. But after missing yet another special day in his son’s life, he vows to make it up to his young boy, by assisting Santa Claus in bringing him the must-have toy of Christmas, the superhero Turbo Man. What he has forgotten is that not only was he to pick up the action figure weeks before, but also Turbo Man is the biggest selling toy in decades. Rushing out on Christmas Eve to fulfil his child’s Christmas wish, Howard is plunged into every parent’s nightmare, as he discovers the toy is completely sold out. Desperate to find a Turbo Man before Christmas, the forgetful father comes head-to-head with another father, a single parent postman (Sinbad), on the same brutal one-day mission, and the two will stop at nothing to find this beloved toy for their sons.

Inspired by the real-life toy wars, such as Buzz Lightyear and Power Rangers, ‘Jingle All The Way’ is insanely wild and hilarious, with Arnie delivering his finest comic role to date, relishing the chance of some light-hearted Christmas action. ‘Eraser’ as a movie, while funny and wild at times, is a very violent and blood-thirsty thriller, filled with death and destruction. So to see ‘Jingle All The Way’ follow in the same year showcased what a wonderful star Schwarzenegger really is. The Christmas cheer practically bounces from the screen with glee, as both Arnie and comic legend Sinbad are put through their paces in a series of hysterical showdowns over a simple plastic toy. They make such a fantastic pairing, delivering their performances with all the zany unashamed fun everyone loves in a Christmas movie. Director Brian Levant (‘The Flintstones’, ‘Beethoven’, ‘Are We There Yet’) brings his love of family film to life yet again, directing the many spirited sequences brilliantly, especially the finale, proving that he’s one of the best directors in the family entertainment business. And with the legendary writer/producer/director Chris Columbus serving as producer, you can expect nothing but the best. Not only a director on two Harry Potter movies, but also the director of ‘Home Alone’ 1 and 2, and the writer of ‘Gremlins’ and ‘The Goonies’, Columbus is a master of film making. His magic touch across all fields of the movie industry is to be admired by all. And I’ve a lot more love for him, thanks to his directing the Robin Williams comedy drama ‘Bicentennial Man’, which is one of my personal all-time favorite movies. The man just does no wrong. ‘Jingle All The Way’ could not have been in safer hands.

The supporting cast are also terrific, especially a wonderful performance from the late great Saturday Night Live star Phil Hartman (Also lovingly known for his voice in ‘The Simpsons’), as Howard’s womanizing next door neighbor Ted. Phil, just like Arnie and Sinbad, rejoices in the fun, as he whips out one chat-up line and snide remark after the other. He really was a wonderful actor, he will always be greatly missed. Rita Wilson (wife of Tom Hanks) is also in great form, as Howard’s wife, who costantly fights off the affections of Ted. She gets some of the movie’s best scenes, and proves herself to be a great comic actress. The post-end credits scene is an especially hilarious touch. Also co-starring is James Belushi, who appeared with Arnie before in the magnifcient Walter Hill action movie ‘Red Heat’. Belushi is absolutely wonderful, alongside his hoard of vicious Santa crooks. “That’ll be 300!… 300 dollars?…. No, chocolate kisses!”. They make a fantastic team, it’s not hard to see why they were reunited. And we can’t forget little Jake Lloyd, of ‘Star Wars Episode 1: The Phantom Menace’ fame. He is terrific as Howard’s son, bringing some much needed tenderness to the crazy events of the movie. While not as lively in Star Wars, he definitely had some great acting chops for a kid here.

As with most Arnie Schwarzenegger movies, we’ve come to expect a great deal of excitement from our hero. And he certainly doesn’t disappoint. While ‘Jingle All The Way’ is primarily a family comedy, there are some spectacular scenes to be had, namely the huge finale. For anyone who hasn’t seen it, I’ll avoid spoilers, but trust me, it’s the kind of finale we expect from Arnold Schwarznegger. Big, exciting and totally bonkers. The whole movie is based around Arnie’s physical stature and fame as an action hero, as he bounds through shopping malls, kid’s playpens and the streets of Minnesota, fleeing from cops, bombs and of course Sinbad’s psycho postman. ‘Jingle All The Way’ is hands down the most exciting Christmas-themed movie ever made.

It may be 20 years since both ‘Eraser’ and ‘Jingle All The Way’ first hit screens, but as time as constantly been kind to the glorious ‘Eraser’, it has been even kinder to ‘Jingle All The Way’. On first release, critics were less than kind to the festive adventure, but over the years many millions of people around the globe have invited Schwarzenegger into their homes for Christmas with his beautiful festive adventure. And they will continue for many years to come. ‘Jingle All The Way’ has the greatest message any of us need to know at Christmas… Our families matter, and our promises to them matter. Lest we forget the true meaning of Christmas. Putting aside all the Arnie adventures, the fantastic humour and classic Christmas songs, this movie teaches us to appreciate the ones we love. What more could you ask of a Christmas holiday movie?