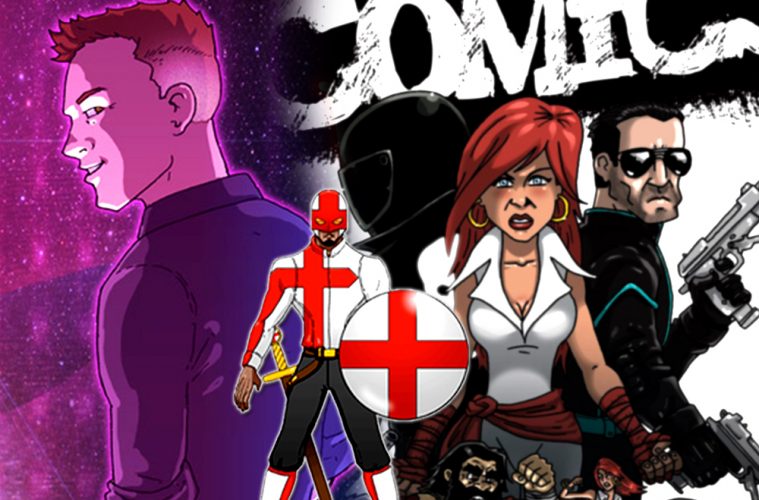 While I’ve had the privilege of interviewing awesome people in the past for AAGG, I’ve never interviewed one who went out of their way to prepare artwork for me to use and for that I want to thank Dan upfront.

Dan Butcher is a independent comic book artist, who lives and works in the UK. His new series, Vanguard, is about “a team of genetically enhanced meta-humans employed by the British government to protect the nation’s interests, at home and abroad,” caught my eye, so I reached out to see if we could get an interview…

What inspired you to create Vanguard, and how long have you been working on it?

Weirdly, the idea behind Vanguard started when I was working on a totally different story concept. As I fleshed out this other idea, the Vanguard story just seemed to have more ‘legs’ to it. I put the other tale on the back burner and put everything I had into Vanguard. I’ve been working in small press and web comics for over ten years or so and for seven of that I’ve been producing Vanguard.

After reading the ‘Ultimates’, watching the Nolan Batman movies and with other writers putting a more realistic spin on the genre, I thought I’d tell my story in a similar style. I decided to set the story in the future, giving me the ability to alter world events and political climate as I saw fit. I had the idea that scientific theory/research had evolved to the point that through genetic manipulation, people could be given ‘super powers’.  The metaphor being that Meta-Humans, as they are known within the Vanguard Universe, would be treated like weapons of mass destruction, especially with the ‘Alpha-One’ enhancement, as this would essentially create a superman for your nation. The process is extremely expensive, very dangerous and heavily regulated. Similar to a country’s ability to manufacture weapons grade plutonium – you don’t want the wrong people to develop that tech.

As the artist who has to express the story visually, how do you go about choosing and working with a writer to add words to your vision?

I’ve worked with a few writers over the years. They’re usually the ones to approach me, which helps! I’ll read a script and try and find a writers previous work to help me decide if they’re someone I’d like to work with. Last year I did the intirors for EL MARVO with Luke Kondor and Ben Errington. That was a lot of fun! A Luchador wrestler awakens in a post-apocalyptic Earth, and with help from a pair of young sidekicks, sets about bringing down the evil overlord 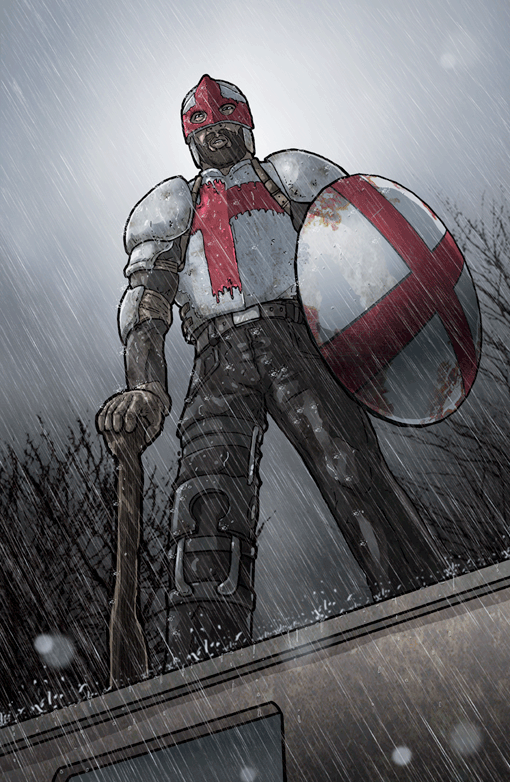 The main character of Vanguard is Pendragon and his costume is based on the St George’s Cross Flag, which a lot of people don’t realize is the actual flag of England, not the Union Jack. Did you consciously choose Pendragon’s outfit to be a bit of a statement on national pride? (Just to let you know, I think the people calling for St George’s Cross to be banned are idiots. There’s nothing wrong with being proud of your country and heritage.)

Well, I wanted the Vanguard to be endorsed by and work for the Government. That being the case, in reality they’d operate with and alongside the Military. You’d have several departments handling their publicity, media image, and their deployment in the field. In the comic, these roles are filled by several characters (McPhaidon, John Hatcher, General Phelps). For public appearances, I’d imagine the team’s marketing department would want them decked out in patriotic garments and symbols of nationalism, hence Pendragon’s St. George’s cross uniform.

As the narrative plays out, the story jumps 15 years ahead and we are introduced to Pendragon after he’s fallen on hard times. Here he’s pictured in a homemade suit, consisting of a painted armoured breastplate and helmet.

I saw from the profile on your website that you’re a fan of 80s action movies. So are we! What are some of your favourites? 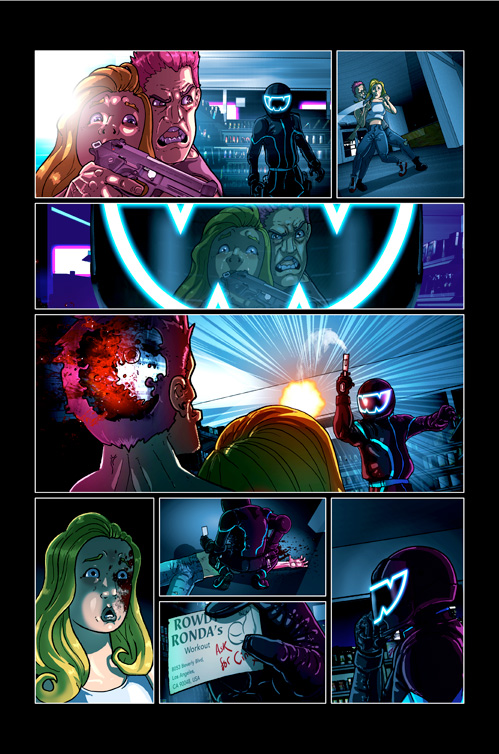 I’m a massive fan of 80’s action films. Asking me to pick out one… damn, that’s hard. My go to would be Predator, but Death Wish III and Invasion USA kill me for the laughs alone. A tough choice indeed.

Based on my love of the films of the age and a deep affection for the super vehicle shows of the time (Knight Rider, Airwolf, etc.), I’ve started a new comic called VYPER. Set 1985, is tells the story of Sloane Viperini, an ex-special forces vet who is recruited to drive VYPER. VYPER is urban pacification vehicle, kitted out with high tech weaponry and gadgets.

The comic will be running in four parts within THE AWESOME COMIC, which will be published four times this year. When we’re done, I’ll be collecting and printing the entire thing in colour. It’s had a great reception so far!

Apart from monetary gain, which is always nice! What do you hope to accomplish with Vanguard or your art in general?

Like most webcomic creators, if I could make comics for a living, specifically Vanguard, I would jump at the opportunity. Art-wise, I’m trying to infuse my artwork with the kind of high energy that you’d find in manga or in the work of Tradd Moore or Daniel Warren Johnson. Those guys absolutely destroy when it comes to depicting high energy action scenes.

Vanguard debuted February 2nd at the True Believers Comic Festival in the UK. You can read it for FREE, in all its British glory, by clicking here.

You can find more of his work for The Awesome Comics Podcast here as well as download the preview pages for El Marvo, another one of his many works. You can also follow him on Twitter @VanguardComic.