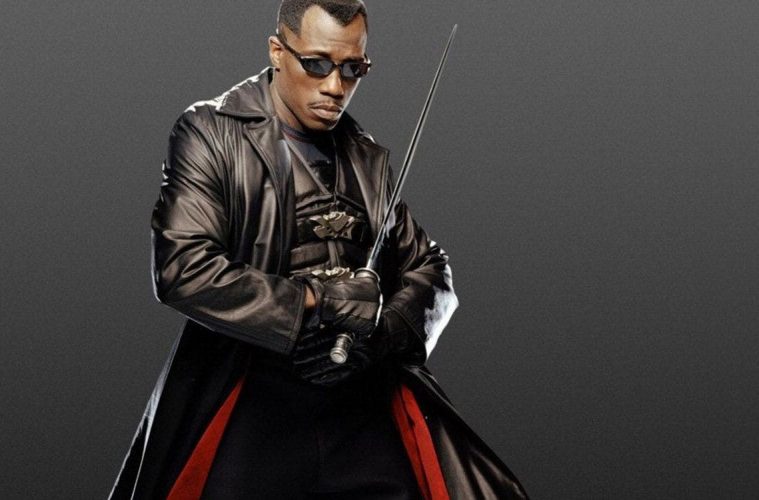 With the recent release of ‘Black Panther’, there was high buzz about a comic book movie having a black lead central character. And while I agreed it was definitely time in the modern wave of comic book movies for black actors to be given their rightful share, somehow people forgot the iconic comic book hero Blade. Blade’s comics have been thrilling fans for decades, and when Wesley Snipes came along to play the brilliant half-man half-vampire hero onscreen, the legacy of Blade grew far stronger. With a terrific trilogy of movies, and a TV series (not starring Snipes), we have taken this character into our hearts. And as I look back, I can’t quite believe the original ‘Blade’ movie is now twenty years old. It hasn’t aged a day.

Wesley Snipes is absolutely fantastic, starring as Eric Brooks, a man who’s mother was murdered by vampires while pregnant. Eric is now the result of that pregnancy, a man half human and half vampire, known as Blade, a Daywalker who uses his power to fight the evil from the underworld. When Blade rescues a woman who has been attacked by a vampire, he discovers that a young vampire, Deacon Frost (Stephen Dorff) is planning to make himself the Blood God of the vampire kingdom. As Blade battles the undead, he becomes the target of Frost, who wants to destroy him and use his hybrid blood to steal the power he longs for. With the world on the edge of hell, Blade uses every skill he has to escape and battle the brutal Frost before he can bring about his unholy war upon the planet.

‘Blade’ is at heart a classic 90’s action movie, with a major action star at the helm, and a thumping techno soundtrack. But beneath the 90’s vibes, ‘Blade’ is also a relentless horror thriller, which has since inspired countless copycats, desperate to cash in on the new vampire craze in Hollywood. We wouldn’t have the current crop of vampire horror movies we’ve got if it wasn’t for this movie. Looking back at this movie, it actually led to so much more in Hollywood, including diversity, by having a strong black cast, even if the villain and sidekick were white. Only ‘Spawn’ the year before had a black comic book hero at the center of its movie. And no doubt had the awesome and horribly underrated ‘Spawn’ been more successful, it would have led to deserved sequels, hopefully with Michael Jai White always in the lead he was born to play. But ‘Blade’s success cannot be passed off to another movie. Where other movies may have failed, Wesley Snipes’ huge fame in the 1990’s helped propell his hero to dizzy heights. While ‘Black Panther’ is being praised now for its diversity in the modern superhero movie genre, ‘Blade’ (and ‘Spawn’) deserve the same credit for being the only movies of their kind in a run of comic book movies centered around white stars. We also can’t forget ‘Steel’, which I also loved, but sadly no one else did.

With any movie that blends action and horror together, there is always the expectation of plenty from both. But it’s actually not that common for it to be successful. Some of the ‘Resident Evil’ movies get it right (The first two are the best, next two weak and last two great fun). And the ‘Underworld’ series nail it. Then there’s others like ‘Legion’, ‘Priest’ and above all, the ‘Saw’ movies, which blend action, horror and gore perfectly. But the Blade trilogy do it on such a larger and more obvious scale, that they take the prize for the best action-horror franchise ever made. Through all three movies, Wesley Snipes delivers ultimate action, with his kick-ass skills, lightening fast humor and brilliant screen presence. Even if he was given less to do in ‘Blade: Trinity’, it was still a terrific action movie and Snipes is on top form in it. ‘Blade II’ is my personal favorite of the franchise, but this first movie is easily the best written and features the best performance from Snipes as Blade. And the supporting cast are also pretty decent, even if none can match up in any way to Snipes. Kris Kristofferson gives it all he’s got though.

Many action heroes have their signature character… Schwarzenegger has Terminator, Stallone has Rambo and Rocky, and Bruce Willis has John McClane. And thanks to the Blade movies, Wesley Snipes has his own legendary movie character. ‘Blade’ has it all. Action, horror, comedy and thrills. And as vampire flicks though, ‘Blade’ and ‘Blade II’ surely must the most awesome and most fun of them all? Happy 20th Birthday, Daywalker. Bring us ‘Blade 4’!