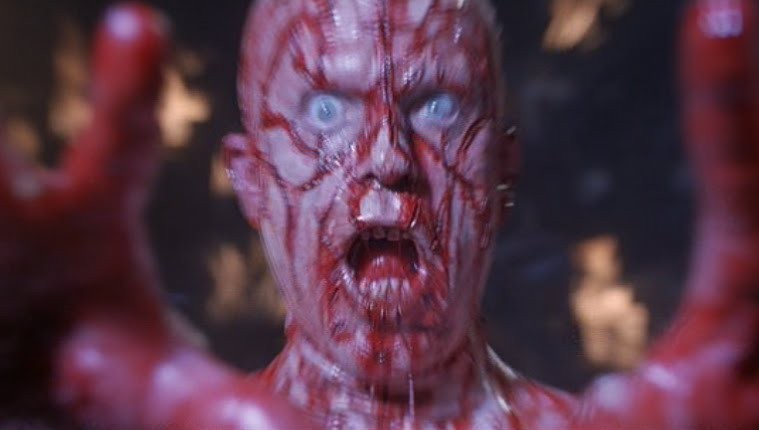 10 HORROR MOVIES YOU SHOULD SEE THIS HALLOWEEN

Every Halloween, some people love to dress up and go out partying, but many of us love to stay home with a bowl of candy and peanuts, and snuggle up to a few of our favorite horror movies on TV. All the classics come to life over the witching season, the classics like Halloween, Friday The 13th, A Nightmare On Elm Street. The Exorcist, The Shining etc… And even the more modern gems like Scream and Saw. But looking past the big obvious hits, many of us have personal favorites in the horror canon, movies that may be overlooked by a larger audience. So to celebrate this coming Halloween and the bountiful movie fest most of us are currently enjoying, here is a list of 10 horror movies that rate highly in my must-watch list during the spooky holiday, movies I’d recommend to any of you who wish to be scared by something new this Halloween. And I really should kick it off with my own all-time favorite horror movie…

When an advanced research vessel, the Event Horizon, vanishes during a routine mission in space, a 7-year search begins to find the ship and the reason as to why it vanished. The Event Horizon is equipped with technology that enables it to create a black hole at any point in the universe and use it to jump instantly from one galaxy to another, light years ahead of any other vessel. But when it suddenly reappears after the failed 7 years of searching, the crew of another research/ salvage ship along with the Event Horizon’s creator are sent to investigate, little knowing of the terror that lays ahead of them, as the ship slowly reveals its whereabouts for all those years and leaves the team in a fight for survival not only from their own minds, but from what exactly came back with the ship…

When a suspended detective for the police gains a new job working security for an old derelict building that was once a department store, he believes it’s just a simple paycheck. What he doesn’t know is that this old store has a sinister history, a secret that is held within the many mirrors left behind, and as the detective investigates the strange happenings that begin to haunt his lonely nights at work, he becomes the target of a powerful force that threatens to destroy him and his whole family. What do the mirrors hold? Who has fallen to them in the past? And who will fall to them next?

Pripyat, the town next to Chernobyl, the site of one of the worst nuclear disasters in history, is strictly off limits to the public. But for one group of friends, embarking on a short illegal visit around the deserted town, the disaster is just beginning, as Pripyat is not quite the deserted town it should be. As the pals enjoy their tour, they are oblivious to the danger and horror that awaits them, but very soon, they will wish they had stayed far away from this nuclear ghost town.

When a virus being spread by cockroaches claims the lives of many young children, a married couple of genetic engineers are brought in to create a bug that will eradicate the viral roaches. Believing that the creation has been a success, and the crisis is now averted, they soon move on, sure in the knowledge that the bug they created will soon die. But years later, a new crisis raises its head. Deep inside a New York train station subway, something is lurking, something dangerous, something that is claiming a whole new batch of lives. And with time ticking, it’s up to the couple to find this new threat and save the many passengers using the subway. What they don’t know is that they themselves have created this threat, and they themselves will be forced to survive it, along with everyone else.

In keeping with the subway theme… When a woman who leaves a late night party heads for her train, she narrowly misses it, and is forced to spend the night inside the station, waiting for the following morning’s train back home. But of course, she’s not alone. Meeting various nasty late-night visitors through the hours, she thinks things can’t get any worse. She thinks wrong. Dead wrong.

When Earth becomes over-populated, a new mission is put into place to move human beings to a planet very similar to that of our own. Using space travel, an ark is filled with people looking for a new home, placed into sleep and ready to be awakened on arrival. But when two men awaken early, suffering from amnesia, they explore their surroundings and look for more wakened people. As the mystery deepens, so does the dread, as more people have woken to find out that something has gone horribly wrong aboard the ark and that somehow, mankind has evolved through the journey, posing a gruesome threat to all upon the ark.

On an opening night at the Chicago Museum of Natural History, a special event is planned to celebrate the mythical of creatures in the world. But in crates of artifacts sent to the museum for the show, something inside that everyone believed was mythical is about to show the guests and organizers that it is absolutely not mythical and it will feast on the human buffet laid out before it on its big gala night. The museum will become history.

Anyone looking for a movie about a lovable and mischievous Genie, go watch Aladdin. Anyone wants to see a real Genie, you’re in look. When a Djinn demon is unleashed from a precious stone after an accident at a dockland, he claims himself a body and spends his time granting wishes to anyone who appears to need him. However, these wishes come with a horrific price for all those who come face to face with this demon, as his granting of people’s desires is anything but what they wanted, as he gleefully twists their every word, leading to a total bloodbath, all the while claiming the soul of every wish maker, to bring about the age of the Djinn upon the earth. Be careful what you wish for. Rest in peace, Wes Craven (Executive producer of Wishmaster), a true master of horror.

As a month-long night takes over a small town in Alaska, as it does once a year, the citizens lock up and knuckle down for the cold long time ahead. But outside, a clan of strangers have gathered to feast upon the unsuspecting people of this town. And as the darkness continues, the feasting continues as one by one each of the town folk who venture outside fall into a pool of their own blood. But who are the mysterious strangers? Are they a group of killers with a taste for blood? Yes. But are they human? And is there a reason they’ve only come to this town to rejoice the 30 days of darkness? You know it.

A small group of pals set out on a road trip, but soon end up in an accident when they take a short cut and end up with an extra person to escort. But along the way, the group stumble across a house in the middle of nowhere, a small rundown old shack. Stupidly, they decide to enter the humble dwelling, only to discover hoards of dead bodies and blood-splattered walls, and make a run for it. However, the house does have residents, a bunch of inbred cannibal killers who pick off every single person who crosses down their street. With the body count rising and the blood pouring, who will survive the road trip from hell? Can anyone?

I hope this list has inspired some Halloween night viewing for you. Be sure to check back with us with your thoughts. Fangs for reading.