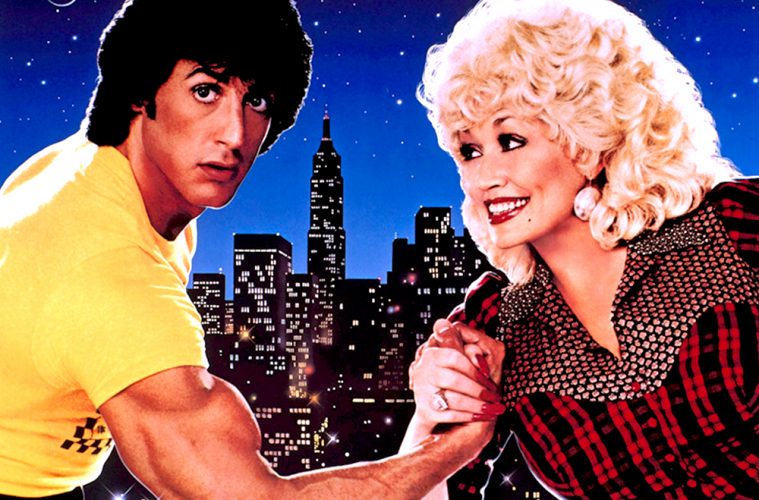 Today I’ll be reviewing Rhinestone, a 1984 film where Sylvester Stallone faces off against Dolly Parton in a contest to see who can wear the tightest shirts…

Leapin’ Jake (Dolly Parton) is the leading star at the Rhinestone, a cowboy bar in the middle of New York City that plays the kind of country even your grandpa hated.

Desperate to escape the dump that’s killing her career, Jake bets her boss Freddie Ugo that she can turn any man into a country music star in two weeks. If she wins, he’ll tear up her contract; if she loses, Freddie gets to have sex with her.

And the man she’ll have to transform?

Rhinestone suffers from several major flaws all of which are enough to sink a film.

With the exception of Dolly Parton, who’s right at home with the country music setting and carries most of the performances, it’s horridly miscast.

Stallone has always been an impressive athlete, actor, producer, and sometimes screenwriter, but a singer? This man clearly wasn’t born to be.

The same speech impediment that makes him sound like a total badass, doesn’t do him any musical favors, but the real problem isn’t that the performances are bad so much as they’re just downright cringe-inducing.

After a few screaming performances with Nick thrashing about like Michael J. Fox on smack, the country folk begin teaching him how to twang by plucking out the melody of Old MacDonald Had A Farm.

However, nothing beats Stallone’s performance of Drinkin’Stein, a song so good, he went on to record a longer studio version for the soundtrack.

The next fatal blunder is the movie changes antagonists as often as patients with zero bladder control will change their Depends.

It switches from the sleazy Ugo, to Jake’s former lover (a cornball cowboy), to Jake (in a half-hearted attempt to turn the movie into a love story), and then back to Ugo at the end.

The real problem is Rhinestone can’t decide what kind of movie it wants to be, slipping between goofball comedy and sappy love story.

The story’s premise sets Jake up as the primary protagonist before promptly shifting to Nick, who has nothing to lose except the immediate ability to be the worst cab driver in New York. Yee-haw.

With all of that being said, I give Rhinestone the official Macho Meter ranking of… slightly less retarded than STOP! Or My Mom Will Shit (sic).

It’s no wonder that Rhinestone is the black sheep of Stallone’s career. After its release, he immediately began distancing himself from its failure and has admitted to regretting he ever made it.

Allegedly, the original screenwriter debated having his name removed from the credits and probably regretted not doing so in hindsight.

Yet, I do have to praise one solid aspect of this flick. Rhinestone is a comedy and at times it’s so absurd I couldn’t help, but laugh my balls off.

Make of that what you will.