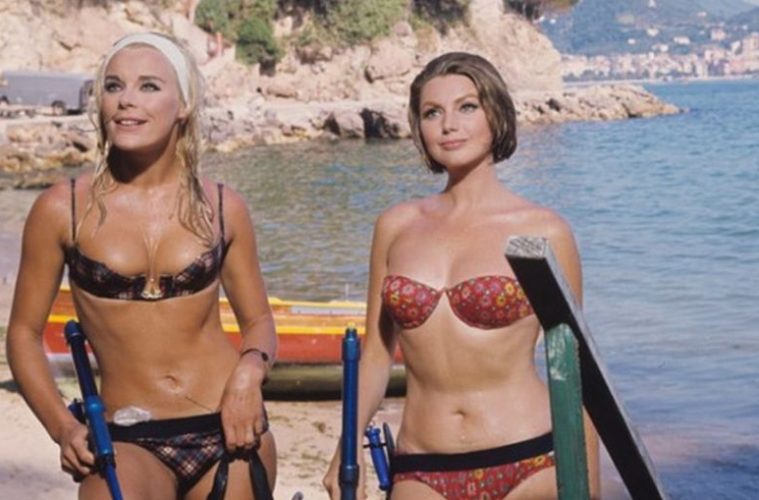 Great Moments in Action History: Deadlier Than the Male

The brilliant, base-level absurdity of James Bond, Insurance Inspector, cannot be . Elke Sommer and Sylvia Koscina most likely make the best pair of assassins in cinema history and I’m willing to do the research to back this up. Not much, mind you.

During the post-Bond boom in the 1960’s, hundreds of 007 imitators dipped their toes in the deep espionage pool using a few simple ingredients. Beautiful women, a jazzy soundtrack, exotic filming locations, and a couple of outlandish stunts.

One standout Bond parody/homage/rip-off was Ralph Thomas’ Deadlier Than the Male (1967), which was itself an update of the Bulldog Drummond character — a character that originated in 1920 with H.C. McNeile’s series of novels. Bulldog made his film debut in 1922’s silent Bulldog rummond starring Carlyle Blackwell.

Bulldog Drummond spent his post-WWI leisure time seeking thrills and adventure as a private investigator. He’s characterized as both “brainless hunk of a man” and  a distinguished English gentleman. By the time Richard Johnson plays Bulldog Drummond in Deadlier Than the Male, he’s become a stoic suit, an insurance investigator accompanied by a tag-a-long nephew named Robert.

Don’t let the workaday duds fool you. The British Board of Censors slapped the X label on Deadlier Than the Male due to the film’s pair of female assassins (the gorgeous and formidable Sylvia Koscina and Elke Sommer), graphic torture, and rampant promiscuity. (And now you’re interested.)

Johnson himself comes with some Bond pedigree himself. Though best known for being married to Kim Novak, the actor was a favorite of Bond director Terence Young, who originally lobbied for Johnson to play 007 in 1962’s Dr. No.

Director Ralph Thomas plays fast and light with the formula and takes every opportunity to showcase his assassins, Sommer and Koscina (and all his lovely ladies for that matter, of which there seems to be no end), hired by a mysterious master criminal played by painfully British Nigel Green. Thomas marks the action set pieces with a comic touch, but retains the aura of the war-traumatized Drummond as a man containing a surprising undercurrent of wickedness.

When you want Bond, but want something else… you can’t go wrong with Deadlier Than the Male. A somewhat lesser sequel called Some Girls Do would follow in 1969, but by then the parade of knockoff espionage films had all but died out.

The interesting twist here is that Bond author Ian Fleming would have originally been influenced by McNeile’s writing thirty years earlier (who was in turn influenced by Sir Arthur Conan Doyle’s Sherlock Holmes and Baroness Orczy’s The Scarlet Pimpernel). Bulldog Drummond inspired James Bond who inspired Bulldog Drummond. Got it?

Deadlier Than the Male is available to watch via Amazon Prime Streaming Video.