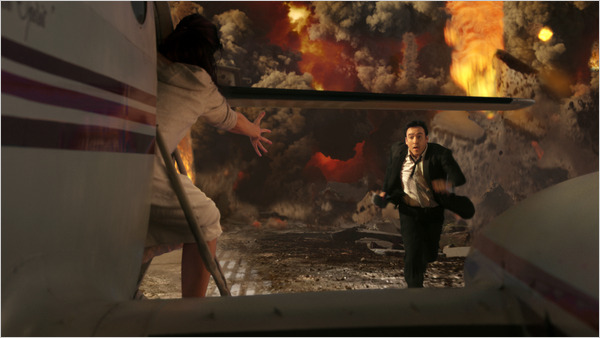 Nothing makes you feel older like discovering a movie is a lot older than you thought. And that’s certainly the case here. I’m not one for going to the cinema as often as I should, so it takes something special to get me to my local movie house. And there’s very little more special than disaster movie daddy Roland Emmerich taking on another doomsday movie. An alien invasion in ‘Independence Day’ and its awesome sequel ‘Independence Day: Resurgence’, a world about to be ruled once more by dinosaurs in ‘Godzilla’ and a new ice age in ‘The Day After Tomorrow’. Emmerich is a name you can trust.

But in 2009, Roland Emmerich took on the biggest project of his career, with another end-of-the-world disaster blockbuster. Taking inspiration from the Mayans and their belief that the world would come to an end in 2012, Emmerich and his skilled team of writers and filmmakers crafted the most ambitious disaster action movie ever made, with the obviously-named ‘2012’. Bringing his love of apocalyptic thrills and family drama together again, Emmerich created what has long been celebrated as a disaster movie of almost unbeatable proportions. Although not always warmly received by critics, ‘2012’ has always had a loyal fan base, including myself, thanks to its incredible action scenes, top-level visual effects and well-written story. It may spiral into clichés, and perhaps even spend a little too much time on certain elements, but let’s talk about what an amazing movie this really is.

John Cusack plays Jackson Curtis, a divorced father, author and hired driver, who takes his kids on a camping trip. But when he discovers that his destination no longer exists, he and his children become embroiled in a top-secret mission, led by Adrian Hemsley (Chiwetel Ejiofor), a scientist with the knowledge we all dread – The end of the world. Determined to survive the predicted destruction of earth and keep his family safe from harm, Jackson takes to the streets and skies in a desperate battle against time, as the world falls all around.

‘2012’ is a rich movie. Rich with visual effects, great characters and some of the greatest action ever put on screen. But above all of that, it’s also one of the last spectacular blockbusters of its kind, with almost every movie on its scale since has been a superhero movie. Roland Emmerich is clearly at his best, showing just how big he can make a movie, even at times outdoing the thrills of his past movies. Anyone watching the iconic ‘Independence Day’ in the 90s knows how amazing this man is and the sheer thrills he’s capable of. Even his follow up blockbuster, ‘Godzilla’, while heavily criticized by many (Not me, I adore it!), is ample proof of Emmerich’s dazzling skills as an action filmmaker. But armed with a bigger budget than ever, he is in the prime of his movie career with ‘2012’. Very few people can put a movie of this scale on screen. And Roland Emmerich does it with class.

Originally, my thoughts on ‘2012’ were a little different than they are today. My first viewing had me question why such a large portion of the second half was dedicated to the arks and the people trying to board them, to survive Armageddon. I remember feeling that I’d have handled it differently. The movie went from a full force outdoor action blockbuster to becoming a very enclosed smaller vision of a thriller set in enclosed spaces. And anyone who knows my taste in action cinema will know I crave growth in action movies. Bigger, faster, crazier. The greats, like ‘Die Hard’ and ‘Terminator 2: Judgment Day’ follow that rule of ramping up the action with every passing scene, growing until it reaches a wildly exciting finale. As I call it, “the porn rule”. But on second viewing months later, I realized that ‘2012’ is about more than exploding buildings and earthquakes. It’s about the survival of the human race. The mystery and the measures of ensuring human life continues. And that’s when the final third of the movie rang through. Why shouldn’t this be a large part of the story? It IS the story. The world’s population surviving the destruction of the planet. Of course, the arks should take center stage. It can’t all be thrills and near misses, there needs to be drama, survival and a study of how we’d cope if this ever became a reality. That’s when ‘2012’ became the definitive disaster movie.

‘2012’ has often been overlooked through its 10 years among us. It’s been criticized for its characters. Which is absolutely unfair, considering the enormous talent who give their best to the characters, such as Chiwetel Ejiofor, Danny Glover as POTUS, Amanda Peet as Jackson’s ex-wife (She’s wonderful here!) and a hilarious performance from Woody Harrelson as an eccentric radio show host who spends his time warning America of the impending doom. There are many characters here, and they all bring something fun and entertaining with them. The action even has been divisive, with many not pleased with the number of near misses several vehicles encounter. I even agreed with elements of that the first time around, although quickly changed my mind. And the plot has been called overstuffed by many. Personally, I disagree. ‘2012’ is a doomsday movie, and doomsday can’t be crammed into 90 minutes. That’s why this movie works. It’s passionate, packed with incredible world-ending action and is driven by its characters and their lives. Everything about this movie excels, even right down to its electrifying Thomas Wander (Google him and bust a gut at his real name) score and the amazing Adam Lambert theme song.

Of all the great natural and man-made disaster movies out there (no aliens, superheroes or dinosaurs), there is no greater disaster movie than ‘2012’. If you haven’t seen it, check it out and celebrate the 10th anniversary of an action movie masterpiece.