5: Battle : Los Angeles – A decent movie, not a great movie.

I saw BATTLE : Los Angeles this weekend and wanted to shoot out a quick review/opinion piece about this particular bit of cinema. No spoilers ahead, just general impressions that will hopefully get some points across.

This movie supposedly cost $100,000,000 to make. It has Aaron Eckhart, a great actor in his own right, and a decent supporting cast. It hits every cliché you can think of for a war film and crams it into a very tight, video game plot format. It’s very “goal” oriented.

And you know that? It manages to be a pretty decent movie. At times, I really wanted to like it, and maybe even did like it. But something about this movie cut its knees out from under it, and honestly, it never managed to stand back up.

What was it? Shaky cam. I know, I know, I’ve talked about this…bane of my existence, but this time it really made itself a problem. 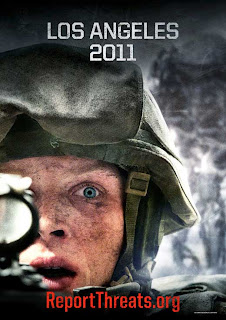 See this guy? He was looking for aliens. So was I. The ENTIRE MOVIE!!!

I had the pleasure of seeing it with my good friend Troy-Jeffrey Allen. He is a writer extraordinaire over at http://www.typographicera.com and http://www.forcesofgeek.com. He also writes an awesome comic called BAMN! That can be found here http://www.comixpress.com/store/index.php?main_page=advanced_search_result&search_in_description=1&keyword=bamn. We speak the language of movies, and are therefore friends.

When walking out of the theatre after the film rolled credits, I looked him at him and asked “Was it just me or were there barely any actual aliens in there? I mean, are my eyes going or what?”. He agreed, and then pointed something out to me that I didn’t even think about. He said they used shaky cam to save money. All that shaky garbage shows shoulders and junk, which means they don’t have to pay people to render that stuff. I saw the light.

But now, after thinking about it, I can’t agree. This movie cost $100,000,000. District 9 (2009) showed more aliens, more action, and had more going on and only cost $30,000,000. But let’s take it further. SKYLINE (2010) cost $10,000,000 (or something infinitesimal like that) and STILL showed more alien action than BATTLE : Los Angeles. What the hell? This doesn’t make any sense to me. I mean, all these movies are alien invasion movies (at their most basic) and all focus on action. But what the hell did Battle miss out on? Why did they just show lot’s of shake instead of giving us the beef?

Now, here’s what I told Troy, and what I’m going to drop here. I heard (internet rumors) that the people from SKYLINE (Strouse brothers) were working with the people from BATTLE and something went wrong. Creative split, whatever. So these guys go make there movie, and then battle comes out. Here’s the interesting thing. If you look at the elements of SKYLINE, it is totally making fun of itself. I mean, it mucks up Hollywood, the sci-fi genre, and celebrity culture in general. The things that make it clear was that it was a movie about “aliens” that use “light” to put people in a trance and take their
“brains”. Put movies where light is and put money where brains is and you have a big freaking joke. Also, the writing. It’s so cliché and ham fisted that something had to be going on there. And then, seeing BATTLE, and thinking about it, I had my own epiphany. SKYLINE was making fun of BATTLE before it had even come out. Genius!

While BATTLE has already scored more money that SKYLINE did domestically, it hasn’t grossed double its budget, which SKYLINE has done. So I’d say the Brothers Strouse won this round. They managed to shoehorn more aliens and irony into their film. BATTLE, for all of it’s good parts, which are many, basically combined INDEPENDENCE DAY (1996) with BLACK HAWK DOWN (2011) but sadly didn’t hit the home run I wanted it to. Anyway, just my two cents.

P.S The ultimate insult to BATTLE? In the movie Aaron Eckhart mentions something about a BUSHMASTER. The military guys behind me got all hot and heavy after he said that. Then the scene with the BUSHMASTER weapon is over and one of them say’s “They didn’t even use it.” He sounded just like a kid who didn’t get what he wanted for Christmas. And that about sums up BATTLE. We just didn’t get what we wanted.
Bonus: Just for Giggles, here’s the original short that lead to District 9 and what could have been a HALO movie. Enjoy!!!!