Zeiram (Zeiramu) (Or Zerum?): This Movie will make you ask why all new movies suck!!! 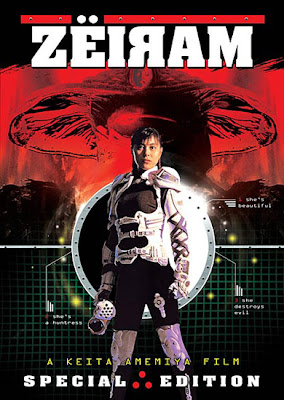 This movie — oh, this movie! I first saw this on the Sci-Fi Channel (no, I will never call it “Sy-Fy”) back in the early 90s. Needless to say, it blew my little mind along with all the other awesome stuff coming out of Japan at the time (and I do stress at the time…most of the stuff I see now looks like garbage). It’s simple, to the point, LOADED with action and throws in some comedy relief along the way.
Directed by Katei Amemiya, the movie follows the story of Iria (played byYûko Moriyama) an intergalactic bounty hunter charged with hunting down Zeiram (Mizuho Yoshida, who also played Godzilla in costume) an equally intergalactic biomechanical killing machine that escaped intergalactic prison and has somehow landed on earth! Charged with capturing Zeiram, Iria goes to earth and creates a whole mini dimension to fight Zeiram in so that no innocents are hurt. Of course, two electritrians get caught up in the mess and are forced to escape and try and help Iria along the way. They are the sweet and innocent Teppie (Kunihiro Ida) and the know-it-all bumbler Kamiya (Yukijiro Hotaru).  Also, Iria, in classic sci fi fashion, has a computer assistant named Bob (voiced by Masakanzu Handa) that helps with most exposition and explaining what the hell is going on.
As mentioned before, the action is second to none. It’s off the wall, over the top, and flows very well. There’s guns, loads of explosions, and nifty tricks all throughout the film that make it hard to look away. One of the best shot’s of the movie starts off when Iria and Zeiram first go at it. Zeiram shoots a missile thing at her. The next shot shows her blocking it and the missile flies off and strikes a building behind her, all in the same shot. It’s a beautiful thing, and something that just doesn’t happen anymore.
“Why not,” you might ask? Because in the “shaky cam” world we live in those flowing, all in one shot’s just don’t get put into movies anymore. Today, if someone was shooting the same thing it would be a jittery mess, with zoom-ins, zoom-outs, twists, and some other garbage thrown in. It would just be crap.
Going forward from that, the action goes from shoot ‘em up to hand to hand combat seamlessly, even when stop motion comes into play (that’s right, I said stop motion!). Other elements bring a Power Rangers on steroids vibe to it. There’s moments where Iria and Zeiram perform moves that have no real value except in a overall martial arts sense, or something. Even though they are from space. But whatever, it all works together. 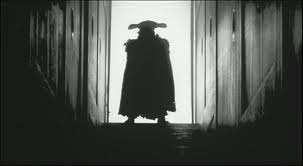 Continuing the theme from Demolition Man and Masters of The Universe, the bad guy makes this a movie to watch all on its own. The film’s namesake, Zeiram has a presence that is right up there with the great Holywood Sci Fi bad guys, including ALIEN (1979), TERMINATOR (1984), and PREDATOR (1987). Looking closer, you can see VERY clear elements from those films that influence Zeiram as a character. He’s got the silent mysteriousness of the Terminator (more so considering that his face doesn’t move), the just plain freakiness of the Alien (at times), and all the trickery and then some of the Predator.
But that’s not to say it is a copy. Far from it, those elements are incorporated into this character and turned into something uniquely Japanese in flavor. Going further than that, the biomechanical elements turn this character into a creator as well as a destroyer. It can take a piece of an enemy (or victim in Kamiya’s case) and make a clone type creature out of it. During the first half of the film it does straight up make a critter that hunts Kamiya and Teppie and does battle with Iria. By the end of the movie you’re asking yourself what can’t Zeiram do. 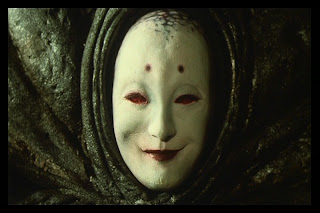 After watching an interview with the director that featured Yuko Moriyama, he actually talked about how Zeiram, if anything, is a “female” character and Iria is the traditional male character. I thought that was interesting as hell when he said that and made me watch the movie a second time with that in mind. It will make you think. 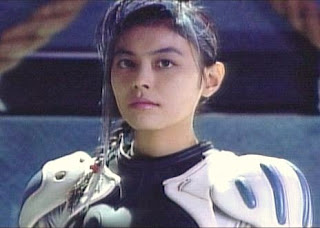 Iria, being the super bad ass chick with the crazy weapons, is played subdued by Moriyama. It adds mystery to a potentially stale character. I mean, this type of plot always involves a mysterious person or some such, but it works best right here. Overall, she’s an intergalactic bounty hunter, and she talks about intergalactic bounty hunter stuff with Bob, the artificial intelligence side kick. He fills in a lot of gaps, and it’s always fun watching the screen when he’s talking. That’s because he doesn’t have a face. Instead it’s early 90’s computer effects, and boy is that stuff laughable. But, it is impressive that those effects are pretty much the only thing that dates the film design wise.
Going back to Iria, I have to give this movie credit for putting a woman in its strong leading role. It’s part of the directors strategy, and Ridley and Cameron did it with Sigourney Weaver in the ALIENS films, but Zeiram takes it to a whole new level and doesn’t look back. Moriyama kicks, jumps, run, and fights the whole time. She looks tough as nails and makes it all look easy, even though it surely isn’t. Going back to that extra on theDVD, she looked so soft spoken during the interview that it was hard to believe it was the same person that did all that fighting during the movie. For a film that came out well before Kill Bill (2003) and this whole BAD ASS CHICK renaissance we’ve been having I am still impressed. 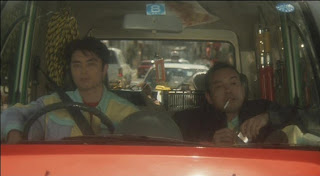 I’m not talking about them too much, but Teppie and Kamiya are a MASSIVE part of the film and provide some legitimate laughs during the movie. A few people on IMDB and elsewhere have described them as the Abbot and Costello of Japanese sci-fi, and I agree. They work great together, the timing is spot on, and they are totally with it acting wise. It might not sound important, but having characters like them take what’s going on around them seriously add to the believability of the film, in effect selling it to the audience. Having actors like these give whole hearted performances instead of phoning it in for a paycheck always works wonders for a movies staying power (I’m looking at you Vin Diesel). As a matter of fact, I said the same thing about Sly Stallone in Demolition Man. (Hmm, maybe I’m onto something?)

But with this film, more so than others, I got to talk up the director. Katei Amemiya has said in interviews that he’s an illustrator and says he thinks like an illustrator when comes up with his movies. This shows the most in the weapon and character designs. In short, they are amazing. All of the guns have detailing that is incredible. Nevermind Zeiram and Iria themselves. Their outfits have flowing, bionic contours that meld into each other. It takes all of that boney liquid form of H.R Giegers Alien and applies it to everything. Even the grenades and headsets look cool and otherworldly. I love it, and it hammers home that whole immersion thing I keep railing about. Oh, and there’s some Blade Runner thrown in there. Can’t forget Blade Runner.
Also, like Masters Of The Universe, the special features are another great reason to check out the movie. That same interview I mentioned before, with Amemiya and Moriyama incorporates behind the scenes footage where he talks about what was going on with the actors, why they filmed in the order they did, and so much more. It’s a great feature, and totally worth it if you can find a copy to buy. I got “The Duology” at Best Buy, and I’m sure Netflix has it. If not go find it yourself. I’m feeling lazy with this post.

What else can I say about the movie? Hell, it’s a cult classic, and like all cult classics, from Rocky Horror Picture Show to Army of Darkness, it has a flow that just melds it all together into a great fun cohesive whole that makes it a love it or hate it experience. I happen to love it. Yes, it has flaws. At times it’s corny, disgusting, and it is just a Sci-Fi action film. I’m not saying these are bad things mind you, it’s just that they make it a cult film. Zeiram 2 has Iria expressing more emotion and making more “statements” that flesh her out as a character. Kamiya and Teppie are there as well, and it is worth a look. It’s as good as the first, which is high praise for any sequel. 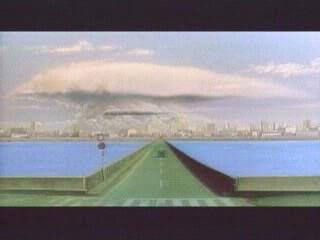 So go out, get it, and enjoy some early 90’s action. Trust me, it is SO so worth. So is the sequel.
Signed with Big Explosions, Guns, Fast Cars, Speed, Scantily Clad Vixens, and Booze.
Sincerely,
Mr. Doom Scarzilla