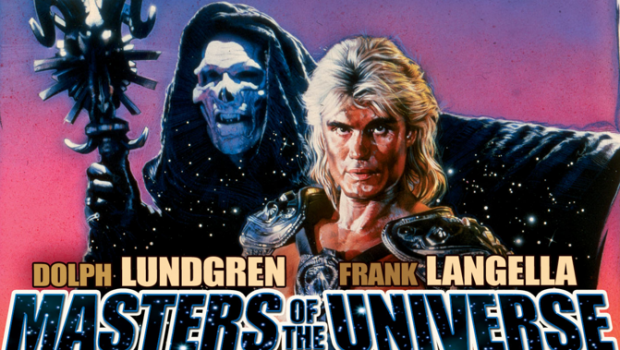 Masters Of the Universe: I HAVE THE POWER!!! Or How I Learned to Love The 80’s. 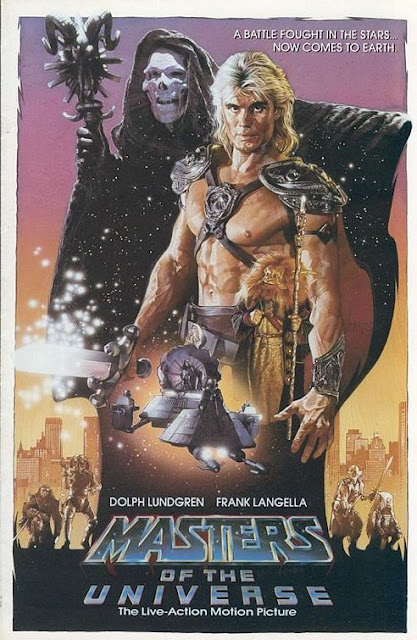 This movie, for all its flaws (which are many) is a gem of the eighties. Personally, I remember watching this movie when I was a child. Specifically, I remember walking the isles of Blockbuster and being SO excited when I saw the box for this movie sitting on the shelf in the kids section (at least I think it was the kids section). Looking at the box, holding it, the anticipation during the car ride, and finally watching it. And…I was disappointed. I was a religious follower of the show. I’d watch it over and over again. The movie opened up big, and was shiny, and it had action. And, Dolph Lundgren looked a great HE-MAN. But the rest of the movies characters didn’t match what was going on in the cartoon, there was no Battle Cat (a.k. Cringer), the movie took place mostly on earth (lame) and overall it felt like it needed more in general. Coming from a six year old, those were pretty serious criticisms. But has time softened this cold movie watchers heart? Is there shine to be found in this now legitimately classic movie? Read on to find out more!

(What follows is a long winded synopsis that actually explains the plot. I did this partly for myself because half of what’s here is indecipherable from watching the film. If you really know the basics, skip it)
The overall story goes on like this. The forces of good are on the run in the far off planet of Eternia. Skelator (Frank Lengella), has imprisoned the Sorceress (Cristina Pickles) and is on a non stop search for godhood. He is in possession of a Universal key that can transport him or his army anywhere in the Universe as long as you know how to “play” the right frequency. He Man (Lundgren) with the help of Man at Arms (Jon Cypher) and Teela (Chelsea Fields) finds Gwildor (Billy Barty, Orko replacement) that developed the Cosmic Key that allowed Skelator to surround castle Greyskull with his army and imprison the sorceress. The whole group is captured by Skelators miniouns but manage to escape using the Cosmic Key. Once they get to earth they are separated from the Key.  In a small town in California Julie Winston (Courtney Cox, SCREAM (1998) is morning the death of her parents with her boyfriend, Kevin Corrigan (Robert Duncan Mcniell, Star Trek Voyager) when they find the key. Kevin thinks the Cosmic Key is a new Japanese synthesizer and they take it for themselves. He Man and his compatriots are stuck on planet earth until they find the key, and meanwhile Skelator has sent his henchman to find the key, and hilarity (I mean chaos) ensues.
(Synopsis out)
Overall, the movie does suffer from the cardinal sin of cartoon or comic adapted stories. They deviate from the source material and fuse it with a more generic storyline that doesn’t interest fans or real action junkies (Sci-fi and Fantasy fans as well). Other movies that have done this are CAPTIAN AMERICA (1990) and numerous others. In that movie there’s only two real parts that have Cap in them, and even those suck. TEENAGE MUTANT NINGA TURTLES (1990) is one notable exception. In this post BLADE (1998) era of comic films the major studies are learning their lesson, with films like SPIDER-MAN (2002), 300 (2006), and IRON MAN (2008) proving that (SHOCK!) sticking to the source material can entertain a mass audience and (DOUBLE SHOCK!) rake in huge amounts of cash. Movies based on classic eighties cartoons however…let me put it this way. MASTERS OF THE UNIVERSE came out in 1987 and featured He Man and Co going to 1980’s earth for reasons stated above. In 2011 we are going to get a SMURFS film. The original show featured their adventures in a town in the middle of a forest. The movie will feature them in New York City. So get ready for “OMG only in New York YOUR FREAKING BLUE MICE” moments. Because, you know, the original premise of the show, which lasted more than a few seasons, isn’t good for our kids. Idiots.
But, this is about MOTU (FOR SHORT!)
The movie itself has a bunch of firsts. It’s the first movie to have Dolph Lundgren in a starring role as the good guy. It’s the first starring role of Courtney Cox, of Friends and SCREAM (1996) fame. It’s also Robert Duncan McNiel’s first staring role. It’s also the directorial debut of Gary Goddard (More on him later! EXCLAMATION POINT!).  All of those firsts make the movie fun to go back to. 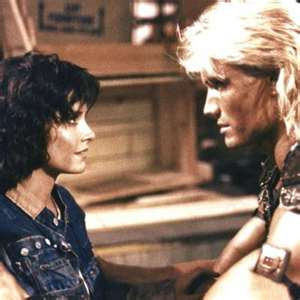 What struck me the most when watching the film was the overall design and costumes, and to a certain extent the quality of both. The movie opens up with a great shot of castle Greyskull. It’s better than the cartoon and many other castles I’ve seen in movies lately. The interior of the castle is also epic and set’s a great tone for planet Eternia.

The costumes design also seal the deal and add lot’s of flavor. The make-up used for Skelator is a good compromise between a real skull and a human face (faces are necessary for acting, after all). Evil-lyn (Meg Forster) and the rest of the bad guys are done in this great heavy metal dark ages look that manages to be corny and cool at the same time. For instance, Skelator is wearing a robe, but if you look at his arms during some scenes you’ll see a few blinking lights. It’s not TRANSFORMERS class special effects, but it’s charmingly eighties and adds some visual verve to something that could be very static.

Action is what this is all about, and again I’d have to say it’s almost STAR WARS class laser fights mixed with legitimate swordplay are definitely entertaining. There’s fire, laser shows, explosions, and even some cool special effects tricks that warm the action junkies heart. The Cosmic Key, for instance, is one of the most underrated sci-fi artifacts in cinema. It’s probably not that ground breaking technically, but it’s terribly well done and fun to watch. Some of the other special effects are charming by today’s standards. Overall, they range from hokey pokey to wow that’s really cool. I mean, it’s trippy to see miniatures and claymation in this all digital all the time age. I’m starting to miss that stuff a lot. 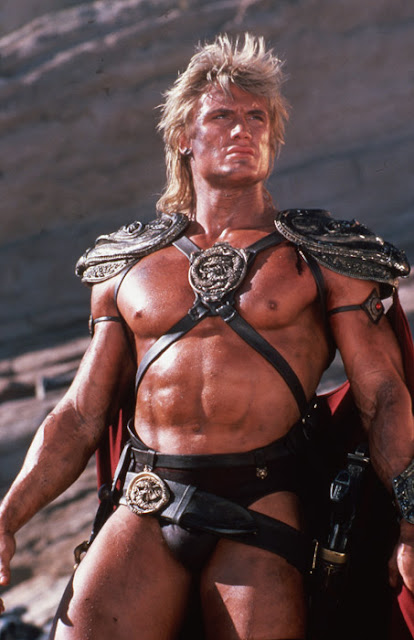 Meanwhile, Dolph Lundgren looks the business, is very imposing, and goes from fight to fight convincingly enough. But he’s not HE-MAN enough. I don’t blame him, I blame the movies story. There’s no development to speak of, and most of what he does say is generic and only in relation to Skeletor. The other Eternians make up for it with good performances (especially Gwildor). But it just lacks the HE-MAN we all know and love from the show.  No Prince Adam, for instance. No sitting around a table talking about the troubles of Eternia, or something. It’s a shame, because a little bit could’ve added a lot to this movies story.

Deosn’t he just look like he wants all the candy?

In contrast, Frank Langella as Skelator steals the show. There is the same lack of development you get with HE-MAN, but every line that comes out of Frank Langella is so potent with scene chewing bravura you just don’t care. He’s Skelator, and he’s up in this motherfucker, and that’s why he wants to rule the universe. He’s great, he’s (almost) the best part of the movie and absolutely makes this thing worth watching. He’s just great. 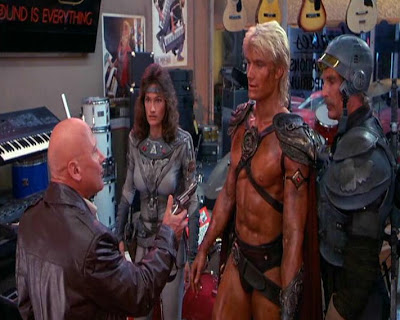 Just another day in suburban California.
Meanwhile, planet Earth sucks. It takes up all the middle action, focuses on a couple of teenagers no one cares about, and provides a boring setting for some wild characters. What’s good about it? The Julie Winston story does grab you with her loss of parents theme, and Kevin Corrigan is almost Marty Mcfly likable. They also make this a heavy 80’s nostalgia film. I mean, everything they do just drips 80’s.  But really James Tolkan (TOP GUN (1986), BACK TO THE FUTURE(1985)) freezes this movie in time. He play’s Detective Lubic, a hard nosed cop who gets swept up in the sci fi adventure going on around him. What’s a New York style detective doing in a sleepy California town? Why is he acting like the small towns bureaucracy is driving him crazy? Where’s your hall pass? Who gives a $hit. He’s there, and he makes earth bearable. Okay, I’m being harsh on Earth. It’s not too bad, it just takes away from HE-MAN. So Earth isn’t bad. I guess I like Earth.
But now I need to talk about my last two points, and these are the most important. This film is the panicle of Gary Goddard’s career. After this, which came out in the 80’s mind you, he directed two short films in the 2000’s and wrote some stuff and produced some stuff. But this was his only film. So, he did the commentary for this film. Let me tell you something. I’ve heard a lot of commentaries from a lot of filmmakers. I make a point of listening to them because they provide insight into an art form that I obsess over, and they are entertaining in their own right. But there are two types of commentaries. There is the “overview” commentary that is phoned in and talks about largely superficial stuff. Things like “Oh, I felt like crap that day” or “So I convinced insert name here to do it because of the integrity of the project!”. Stuff like that. But this commentary is really special, and something any movie fan should listen to. Goddard talks about the framing of shot’s, specific special effects, what he fought for as Director, the business behind the movie, how the movies ending almost didn’t happen because of lack of funding, how he shot around the ending, and Pig Boy. The story of Pig Boy. He also talks about shots that could have been, like how he should have stayed on Skelator when he turns into a god, and how the movie was MEANT to be filmed in Eternia, but that was scrapped because of lack of funding. Also, Mattel’s involvement. It is so much, and if you are a fan of movies you have to watch. You can hear the love for his work in his voice, and I’ll say right now it’s a damn shame he didn’t make more theatrical films after this. He could have been the John Hughes of Eighties Sci-Fi action movies. 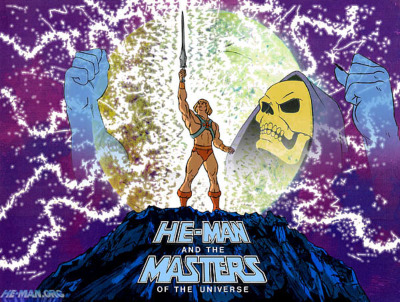 The last, and most personal things about this movie is when HE-MAN say’s it. He lifts up the sword and screams out I HAVE THE POWER. I hadn’t heard it for years, but when I finally did hear it again I got giddy and sported a full on geek chubby. It was one of those things you don’t realize was missing until you see it. Flat out, no kidding, the best part of the movie, and you should see it because it will make you feel all warm and fuzzy where your heart is. Great stuff.
So the movie has flaws. It does. To be honest, even by eighties standards, it’s not up there with the best. But it is worth watching. Especially for the commentary. So, I ask you to open your heart and give this movie a chance. It will surprise you, and shock you, and it will make you laugh, but most importantly it will make you remember a time gone by with a smile.
Signed with Big Explosions, Guns, Fast Cars, Speed, Scantily Clad Vixens, and Booze.
Sincerely,