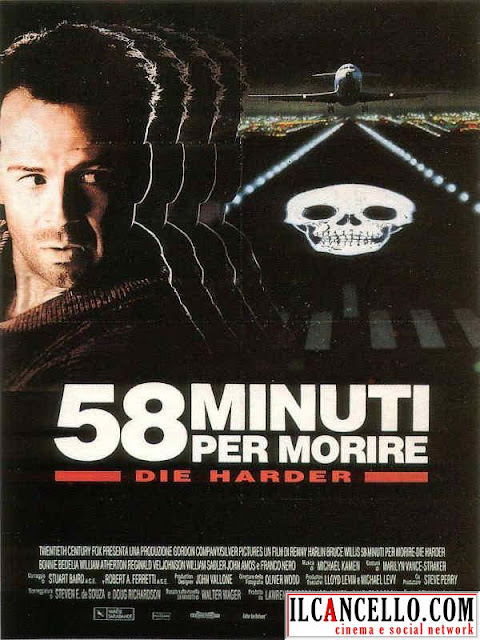 Ah. Die Hard 2…of all the Die Hard films you are the misfit of the bunch. Not as iconic as the first film, just not as good as the third film, and probably not as memorable as the fourth film (which is high praise, as I’m not a fan). And yet, you still manage to stand out in the action landscape.

But should we care? Has it stood the test of time? Should it be forgotten so we can just live in a world where every odd Die Hard film exists in a perfect unbroken stream of action awesome?

We’re going to answer all those questions and more with a final verdict on Die Hard 2: Die Harder.
The Story:
John McClane is at it again, this time waiting for his wife to arrive at Washington Dulles International airport in Virginia. (Yet, everyone keeps calling it D.C…but more on that later). They’re supposed to meet the in-laws for the holidays, but of course this all goes out the window when a group of terrorists takes over an airport to safely intercept a South American drug lord. In doing so they are holding every airplane in the sky hostage until said drug lord and terrorists are out safe.
Honestly, it works. The script is well written and hits all the beats it needs to. The highest praise overall is that it manages to “feel” like a Die Hard film. There are deep rooted flaws, but those will be explained later.
The People Who Get Paid to Talk:
This Die Hard film is star studded.

Some players come back for minor roles, such as Reginald VelJohnson showing up as Sgt. Powell and William Atherton pulling repeat shenanigans as Richard “Dick” Thornburg. Bonnie Bedelia is back as Holly McClane, (Sen) Fred Dalton Thompson (Law and Order) is thrown in there, as well as Dennis Franz (NYPD Blue), Art Evans,  John Amos (Good Times), and Colm Meaney (Under Siege) as the pilot.

The terrorists have some interesting casting choices as well. 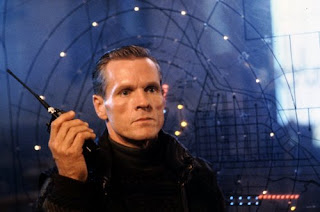 Franco Nero (Django, Django Unchained) plays the drug lord, and William Sadler leads the terrorists with a ruthless performance as Col. Stuart. The minor players among the terrorist are the most interesting. Robert Patrick is here, and as everyone knows he went on the play the T-1000 in Terminator 2: Judgement Day. John Legiuzamo also has a bit part. Others familiar faces are present as well.  All of them give great performances and do their best to sell the script.
The standouts are Fred Thompson as the airport chief and  Dennis Franz as the head of airport police. Both manage to steal the scenes they are in.
William Saddler plays a great, but overshadowed psycho as the head of the terrorists and John Amos is a fantastic as Major Grant. He is one of the best things going on in the movie.
But this is Bruce’s show, and he carries it the whole way through, with style.
What’s Action A Go Go?:
The last half of the movie. After the terrorists make themselves known and do something really bad, this movie kicks into high gear and turns into a real Die Hard film.
As morbid as this might sound, the plane crashes (using models) are amazing to watch and give the movie an epic scope.
The shoot outs and plot twists kick in, as well. That’s the other secret sauce that makes a Die Hard movie special. Nothing should be what it seems. Towards the end of the movie that factors in, particularly with Major Grant. When the big reveal happens, you’ll instantly start backtracking to figure out where all the earlier seeds were planted.
Oh, and it’s a Christmas movie…can’t forget that.
What’s Action A No No?:
Well, here’s were I get to rip into this one. It’s full of factual errors all over the place. It’s bad, even for an action movie.
First and foremost, Action A Go Go is headquartered in D.C, so this is a huge no no for us: This film is “set” in the District of Columbia, but you’d be hard-pressed to notice. Thanks to casting, a complete lack of establishing shots, or “geography,” it might as well been set in New York.
Also, McClane says a GLOCK 7 is a porcelyne gun that can’t be detected in a metal detector. This is cool to say but total bullsh**. A GLOCK “17” is a polymer, or “plastic” pistol and has a metal barrel, so it most definitely can be detected by a metal detector.
What else? Well, the beginning sucks. It literally throws itself into being an action movie and lacks the depth of character and tone that made the original Die Hard special.
I watched it with the director’s commentary on and got to hear Renny Harlin talk about the experience of making the movie. It was fascinating listening to him go on about the mechanics and building blocks of an action movie. It definitely made me appreciate the movie more, but also gave me a good impression of what is wrong with Die Hard 2 to begin with. They set out to make a good action movie, but along the way ignored the things that made Die Harda great movie to begin with. That is Die Hard 2’s greatest flaw.
The Verdict:
Despite those severe flaws this is ACTION A GO GO approved.
It’s intense, has loads of drama, epic explosions, and John McClane shines throughout with a cast full of characters that simply can’t be ignored. But it could have been so much better.
Moving on, Troy is going to be handling Die Hard with a Vengeance and Live Free and Die Hard so stay tuned for more installments in our Die HardRetrospective. We’re going all in on this one.