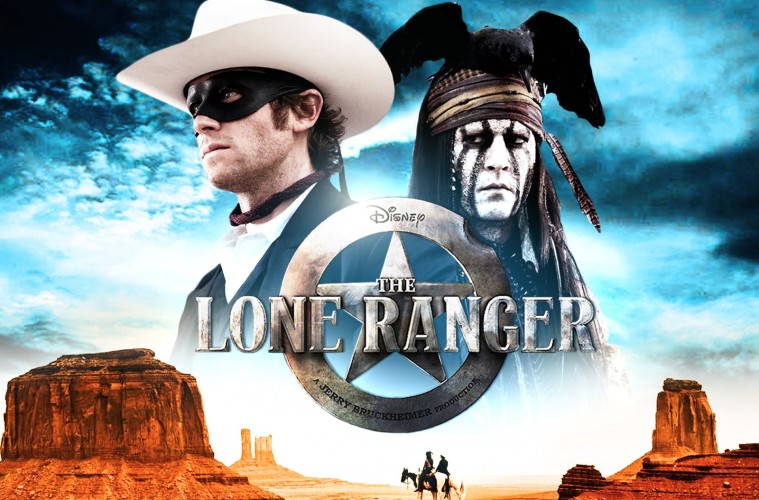 THE LONE RANGER: The Wild West Has Never Been This Weird

Derek ScarzellaJuly 6, 2013
Movies0 Comments1 views
Directed by Gore Verbinski
Starring Johnny Depp and Armie Hammer
How do you go about spending 200+ million dollars? If I had they type of scratch lying around I’d probably get a couple of awesome homes, fast cars, and spend the rest of my time throwing parties until my wallet was empty. Apparently if you’re the Walt Disney Company you take stories that are in the public domain (or you just happen to have the rights to) and turn it into a really big movie. They did that with John Carter and created one of the biggest flops of the century and a textbook example on how to NOT name a movie and then market said movie to the public.
Well, they are at it again, but instead of feeding on the corpse of a literary classic like a giant corporate vulture they are mining everyone’s favorite 20th century radio and T.V character, the Lone Ranger. The last time they tried to reeducate a new generation to a hero of the past it was met with a resounding thud, but they have Johnny Depp this time and the power of the wild west.

Armie Hammer does starring duty as John Reid/The Lone Ranger while Johnny Depp plays Tonto. The plot of the movie centers around a collection of criminals trying to the railroads to consolidate power, monetary and otherwise, across the U.S and The Lone Ranger and Tonto trying to stop them. But that’s been done to death. What’s really on display here is Johnny Depp’s performance as Tonto and Reid’s growing into the role of the Lone Ranger. And they do have chemistry, each taking turns being ridiculous while the other manages to be the straight man.

The supporting cast manages to shine as well, and I have to tip my hat to Gore Verbinski for bringing such a diverse array of characters to the screen. While I am not a huge fan of the Pirates Of The Caribbean series his willingness to make the characters around the core cast distinct and allow them to even steal the show at times was a great strength to the series and helped give it the traction it has had with audiences. The Lone Ranger share’s in that benefit.
THE GOOD….
Besides aforementioned chemistry between Depp and Hammer and the supporting cast the action in this movie delivers. Shootouts are intense and explosive. Some of the stuff they’ve done with trains in this movie was pretty incredible as well. The icing on the cake is the world building that goes on. The costumes are great and when they are in the dessert you can feel the dryness on your lips.
THE BAD….
The Disney Co has a bad habit of shoehorning children into their movies and this film is a prime example. Also, while the story is good, towards the end the movie turns into forced climax after forced climax that gets tiring and actually makes you wish the movie would end sooner rather than later. And it would have been nice if it had decided to be a bit more of a serious film than a comedy film. But that is the nature of the beast with this type of movie.

3 OUT OF 5 ARNOLDS!
This is not one for the ages, and who knows if it will make back its enormous budget, but this is ACTION A GO GO because of the strength of the cast and the relentless wild west action it manages to bring to the screen.