KICK ASS 2 REVIEW: They somehow found a bigger can of #KickAss… 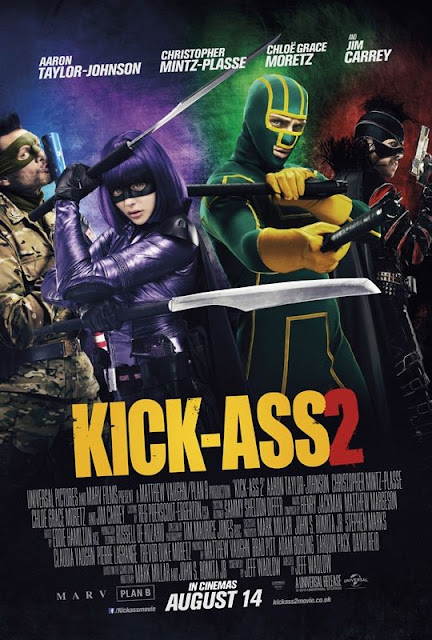 Exploitative schlock is a term that’s underused these days. If you think about it, it’s all over the place. It’s on our T.V’s, it’s in our theatres, it’s even in what we read. A lot of movies have managed to fall into that category over the last few years, particularly, Kick Ass. Directed by Mathew Vaughn and based on the comic by Mark Millar and John Romita Jr, Kick Ass was meant as a big bold @#$% you to the cookie cutter superhero franchises that it was a part of.

Now, here’s the conundrum: Kick Ass 2 is a sequel and by its very nature a money grab meant to ride the waves made by the first movie. Can the same trick be pulled off twice? Can this movie be a counter culture cinematic hero without coming down with a bad case of sequelitis?

Thankfully, I’m here to take you on a wild ride to find out if Kick Ass 2 lives up to its heritage or should be regulated to a Red Box last resort.

Let’s have some fun.

THE STORY AND THE PEOPLE WHO GET PAID TO TALK:

The story is simple. Kick Ass (Aaron Taylor-Johnson) and Hit Girl (Chloe Grace Morentz) are trying to live normal lives as teenagers but are having trouble adjusting. They decide to give the super hero thing one more go, but things get twisted when The Motherfucker shows up (played well by Chirstopher Mintz-Plasse, and, yes, that is the main bad guys name) to exact revenge for the death of hs dad from the first film.

Similar to Nicholas Cage’s turn as “Big Daddy” in Kick Ass, Kick Ass 2 gives audiences another Hollywood heavy that steals the show. This go round, Jim Carrey drinks all the milkshake as Colonel Stars and Stripes. It’s a shame he flat out rebelled against this movie, because he is the best part. His performance is grounded and serious while still getting some of the best lines, and laughs, of the entire movie. He really does disappear into the role and, dare I say, makes me hope he broadens his acting roles moving forward.

This movie manages to get a lot more out of this simple premise than I expected it to. While the first film felt like rather standard Hollywood teenaged soap opera, this film blows everything up. This mostly comes from Hit Girl and her attempts to fit in with the rest of the high school crowd. She manages to get wrapped up with some mean girls and even makes the varsity cheer leading team. I know this isn’t Cheerleaders-A-Go-Go but things get twisted in the best possible ways when Hit Girl is involved in anything.

The crime fighting squad that Kick Ass joins is also a source of much enjoyment. It provides loads of comedy for what would otherwise be a repetitive movie, even providing surprisingly poignant moments.

Also, the action. After a lot of hum drum middle of the road movies it was refreshing to see a movie embrace it’s roots and deliver some expletive-laden rampages. Which is where The Motherfucker comes in. This character is a prime example of the razor’s edge that this movie walks. It could’ve sunk the whole experience, but thankfully this didn’t happen. The bad guys in this movie are just as fun as the good guys and at times downright spooky. The towering enforcer Mother Russia comes to mind, as she is worth the price of admission alone.

While this movie didn’t lose me, I can see how some audience members would be turned off. Characters can be stereotypical, some plot twists are ridiculous, and the film doesn’t delve deep into what it means to be a hero/villain. One reviewer (who shall remain nameless) compared it to the Dark Knight and complained that it didn’t build on the previous film the way that movie did. To complaints such as this all I can say is that if you go watch something called Kick Ass 2 expecting TDK levels of brooding you are stepping into the wrong movie and frankly just don’t get it.

ACTION A GO GO approved. This movie lived up to it’s name and then some. Even further, between this and Pacific Rim, my summer has been saved. Both (along with the first Kick Ass) are going to make their way to my Blu Ray collection.

So go see it and enjoy the last good balls to the walls action movie of the summer.