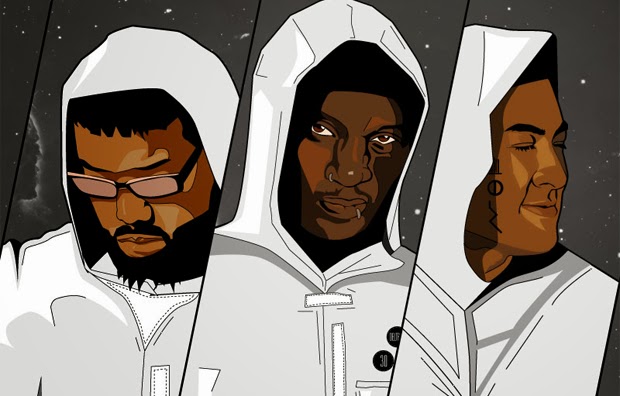 In a year of disappointing trips to the well, Deltron 3030’s Event II may be the only beacon of light in a rampant media wasteland.

Back in 2000, rapper Del The Funkee Homosapien (Gorillaz), producer Dan The Automator (Handsome Boy Modeling School), and DJ Kid Koala (Lovage) combined forces to bring the hip hop world Deltron 3030. Described as a futuristic concept album, the trio painted a dystopian picture where rebel forces lyrically duke it out in an effort to overthrow their 31st-century oppressors. The indie project was a modest hit, gaining a cult following over the years and giving birth to other oddball concept projects such as Peeping Tom, Lovage, and Gorillaz. Jump forward to 2013 and the trio have finally gone back to the future. Continuing the next chapter in their “rap opera” with Event II.

Just like the 2000 release, Del and company are co-signed by a seemingly random assortment of vocal talent. Joseph Gordon-Levitt (Don Jon) and Mary Elizabeth Winstead (Scott Pilgrim vs. The World) lend cinematic credibility to this saga. Meanwhile, Damon Albarn (Gorillaz), Zack De La Rocha (Rage Against the Machine), and many more bring punch to their respective chorus work. It’s a welcome return, one that stylistically and thematically opts for consistent groove over the looming fad of spastic grandstanding.

Ah…what the hell. Check out the original album too:
Troy-Jeffrey Allen writes about action/adventure for Action A Go Go. He is a comic book writer whose works include Bamn, The Magic Bullet, and the Harvey Award nominated District Comics. His work has been featured in the City Paper, The Baltimore Sun, Bethesda Magazine, The Examiner, and The Washington Post.