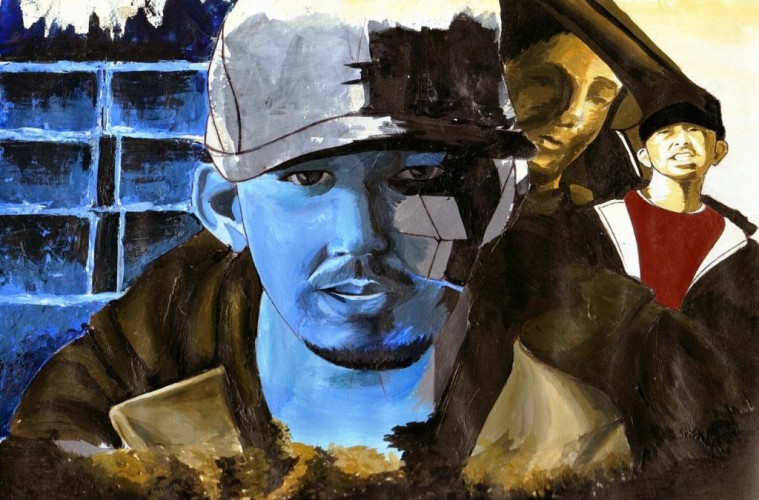 SHACK HOUSE: A Minor Rising of the Tied

Over a decade ago, the whole rock-rap, rap/metal sub-genre (also known as nü-metal) was saturating the airwaves, MTV and the music collection of a young suburban Black teen named Sy Shackleford. While the fusing of hip-hop musical elements with the sounds of rock guitars was nothing new even back then, it seemed to devolve into a cringe-worthy parody of itself with the more popularity it garnered. Most of the bands representing this genre wanted to distance themselves from it and its high dose of criticism. The lyrical content of most of these bands was the kind of angst-ridden, “my parents ruined my childhood” tripe that sounded like it came from a teenager, but in a rapped form. The instrumentals were hard and hip-hop influenced. I remember watching an interview in early 2002 with Alien Ant Farm and they were asked of their opinion on the genre. One member of the band stated that the fusion of rap and rock is only good when it’s done right. “Right” depends so greatly on one’s taste and point-of-view in this context, not moral authority (though that’s subjective as well). For me, “right” meant having a front man who could actually rap. Only two bands in this sub-genre fit that bill: Rage Against The Machine and Linkin Park. The latter had the benefit of having two multi-instrumental vocalists. One who was a singer, the other a rapper. Linkin Park’s best-selling 2000 debut Hybrid Theory showcased the rhyming talents of Mike Shinoda. What later convinced me that he could spit was his verses on the X-Ecutioners’ track “It’s Goin’ Down”. In the first half of the last decade, Mr. Shinoda networked and gained enough respect and recognition in the hip-hop community for his talent behind the mic and his burgeoning talent behind the boards. Enter his personal project, Fort Minor.

Fort Minor is a band in the same way that Nine Inch Nails is also a band: It’s comprised of only one person. In this case, Mr. Shinoda. For his 2005 debut, The Rising Tied, he produced all of the tracks himself and rapped most of the verses. A collaborative mixtape hosted by DJ Green Lantern months earlier (Fort Minor: We Major, go find it) sparked my interest in the forthcoming debut. A co-sign from rap-mogul Jay-Z didn’t hurt either (Hov was executive producer on the album). A testament to his respect is the caliber of guest artists recruited for the album: Styles of Beyond, Black Thought, Common and John Legend. He collaborates with the former on several tracks. With Shinoda being the album’s sole beatmaker and principal lyricist, there’s a sonic consistency here that most hip-hop albums strive to attain by hiring a barrage of producers, but few manage to achieve. Shinoda touches on a several topics, paranoia and frustration being paramount. He engages in braggadocio rhymes on numerous tracks and suceeds more often than falling short. An example of this is the lead single “Petrified”. Lead by hard slams and a loud bounce, Mike’s lyrics add to the menacing countenance of the song. The track “High Road”, on the other hand, falls short. It’s saved by John Legend’s piano and his voice assisting on the hook. While the concept of the song is about not stooping to the level of ones haters, it’s marred by more than a few corny punchlines accentuated by Shinoda laughing at the end of said lines (“you’re like a high school dropout: no class”; “I’m like a struggling doctor: No patience, hahahahaha!”).  Personally, I think Shinoda is at his best on the conceptual and storytelling tracks. Three of which come to mind: The final single, “Where’d You Go” is a somber track with Holly Brook on the chorus. Shinoda raps from the point of view of his wife, frustrated with her husband’s attention to his career and the distance created by his choice.

Shinoda gets extra-creative on “Cigarettes” where he uses cancer sticks as an extended metaphor for contemporary rap. It sounds tongue-in-cheek and could’ve been better if he added a third verse to further explore the comparison. The beat samples police sirens in the intro and uses violin-synths to build a crescendo. My favorite track on the album, “Kenji”, provoked a diversity of feelings in me that I was unaware could be experienced simultaneously. I was head-nodding, rapping the lyrics, and feeling angry and teary-eyed all at once. Built behind a killer bassline, eerie synths, hard fast-paced drums and an rhythm guitar, Shinoda tells the true story of what his grandfather (Shinoda’s half-Japanese) experienced as a Japanese-American after Pearl Harbor was bombed. The level of detail at this true depiction of prejudice, fear, hatred and resolution is astounding, as is Shinoda’s inclusion of recorded samples of the account from his father and other members of his family. Copying and pasting a sample of the lyrics won’t do the song justice, you have to hear it:

Celph Titled from the Demigodz also makes an appearance in the form of a recorded freestyle battle involving him (on the track titled “The Battle”). Along with the aformentioned guest appearances, Shinoda seems intent on bridging the gap between the best parts of the undergound and mainstream rap scenes. His inability to succumb to conventional topics kind of makes him an anomaly who polarizes rap listeners in the same manner that Macklemore currently does. Adding to the fact that Shinoda’s a mixed-race Asian-American makes some listeners wonder how they can relate to him at all. But that’s immaterial. This particular listener doesn’t care about skin color in a Black art form. I care about talent, everything else is incidental and can only make one more interesting if portrayed in such a way.  Yes, The Rising Tied has some tracks that are worth skipping, but very few. Some have labeled this album as “alternative hip-hop”. Me? I just call it “hip-hop”.