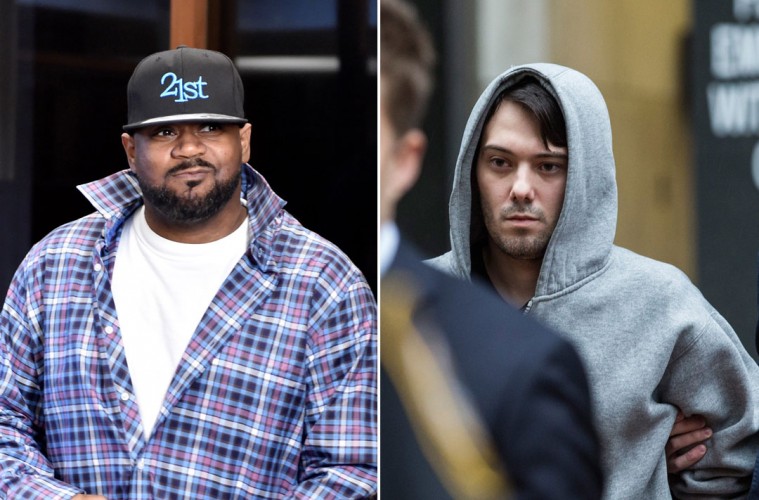 In 2009, the hip-hop supergroup Wu-Tang Clan began recording songs for their seventh album titled Once Upon a Time in Shaolin. In 2015, the album was released…albeit with the biggest catch ever since Odell Beckham, Jr.: Only one single copy of the album was ever made, no commercial release was ever planned. In fact, it won’t be commercially released until the year 2103. The only copy in existence was purchased via an auction, and the owner has the discretion to distribute the album in anyway that doesn’t constitute making a profit from it.

The album was sold to hedge fund manager/pharmaceutical executive Martin Shkreli for $2 million. At the time when the details of the sale became public knowledge, Mr. Shkreli was engaged in a controversy of his own. He increased the price of an AIDS drug by nearly six-thousand percent (that’s from $13.50 to $750 per tablet). However, this was stated to happen after the sale for the album occurred. Wu-Tang clan member Ghostface Killah recently commented that, while he doesn’t know Shkreli personally, he doesn’t approve of him exponentially marking up the price of AIDS medication.

In response, Shkreli recorded a video with himself and three masked-hooded men mocking Ghost. In it, he called the rapper by his government name, dismissed him as irrelevant, and all sorts of disrespectful statements. He even threatened to have any of Ghostface’s contributions to the auctioned album removed. See below for the full video.

In looking at this video and researching the man, I have to say the Mr. Shkreli made a fool of himself. The video and its contents look like a piss-poor WWE promo. He reminds me of Shane McMahon circa 1999 with the masked goons being the Mean Street Posse. One of them in the video is actually pretending like he’s guzzling from a bottle of Hennessy through his mask. 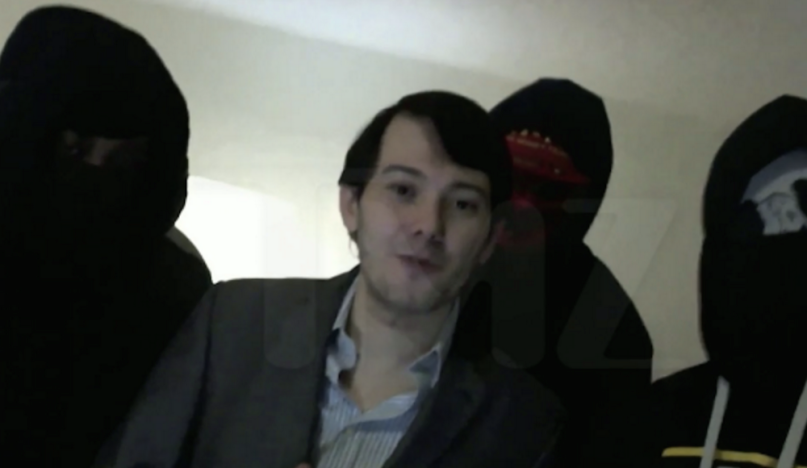 After calling Ghost by his government name, telling him he’s irrelevant and that “I’m gonna erase you from the record books of rap. You’re gonna be done, you’re my son!“, he demands an apology from Ghost, some act of contrition that’s basically nothing more than a humiliation tactic concocted by some suit with an overdeveloped sense of entitlement. Look at the Twitter posts below: 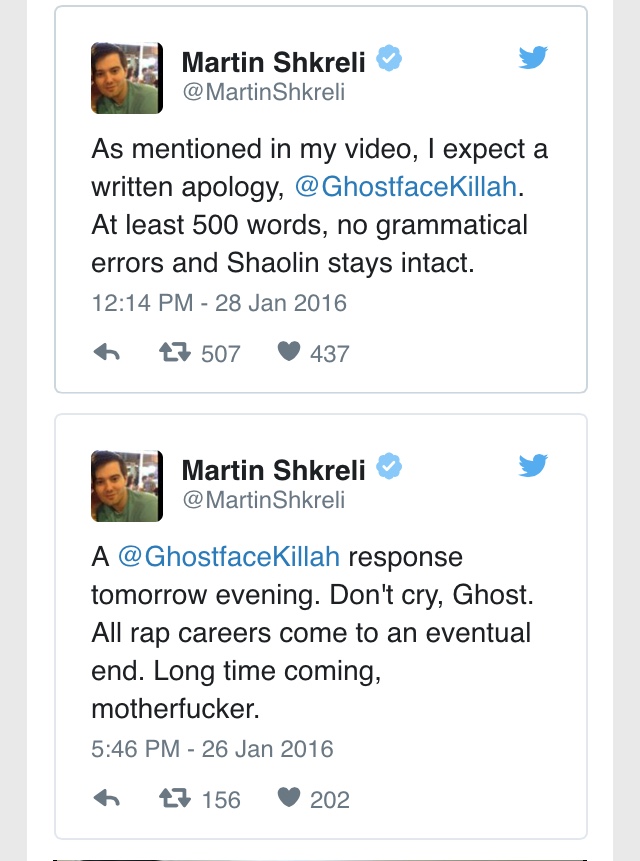 He has quite the gall to engage in something like this considering he was arrested last month for defrauding investors in his hedge-fund. If convicted, he’ll most certainly get Bernie Madoff-time and then we get to see if his money or any of his boasts will prevent him from becoming the Aryan Nation’s personal blow-up doll at whatever federal prison he gets sentenced to. Has he ever heard the torture intro to “Method Man”? Is he aware of the phrase “Wu-Tang Clan Ain’t Nuthing ta Fuck Wit”? Obviously not. One thing he could do before the physical backlash is put the Wu-Tang album on Mediafire so that the rest of us can hear it. Ghost is your son? I’d like to see Mr. Shkreli’s response when Ghost does him like he did with Action Bronson:

He’s cocky enough to think that his money allows him do anything. In many ways, he’s right. Because with it, comes power. But his actions have made him both a hated man and a punchline. For me and every other hip-hop fan, he’s definitely the latter. He’s got what are probably some upper-middle class White boys to dress in hooded masks to mock Ghostface and really believes that people can’t see through his act. Mr. Shkreli’s actions are nothing more than a rich kid’s publicity stunt. People knew who Ghostface Killah was long before they knew of Martin Shkreli, even though the latter has more wealth. But despite all of this and his well-publicized legal troubles, it still beggars this question: