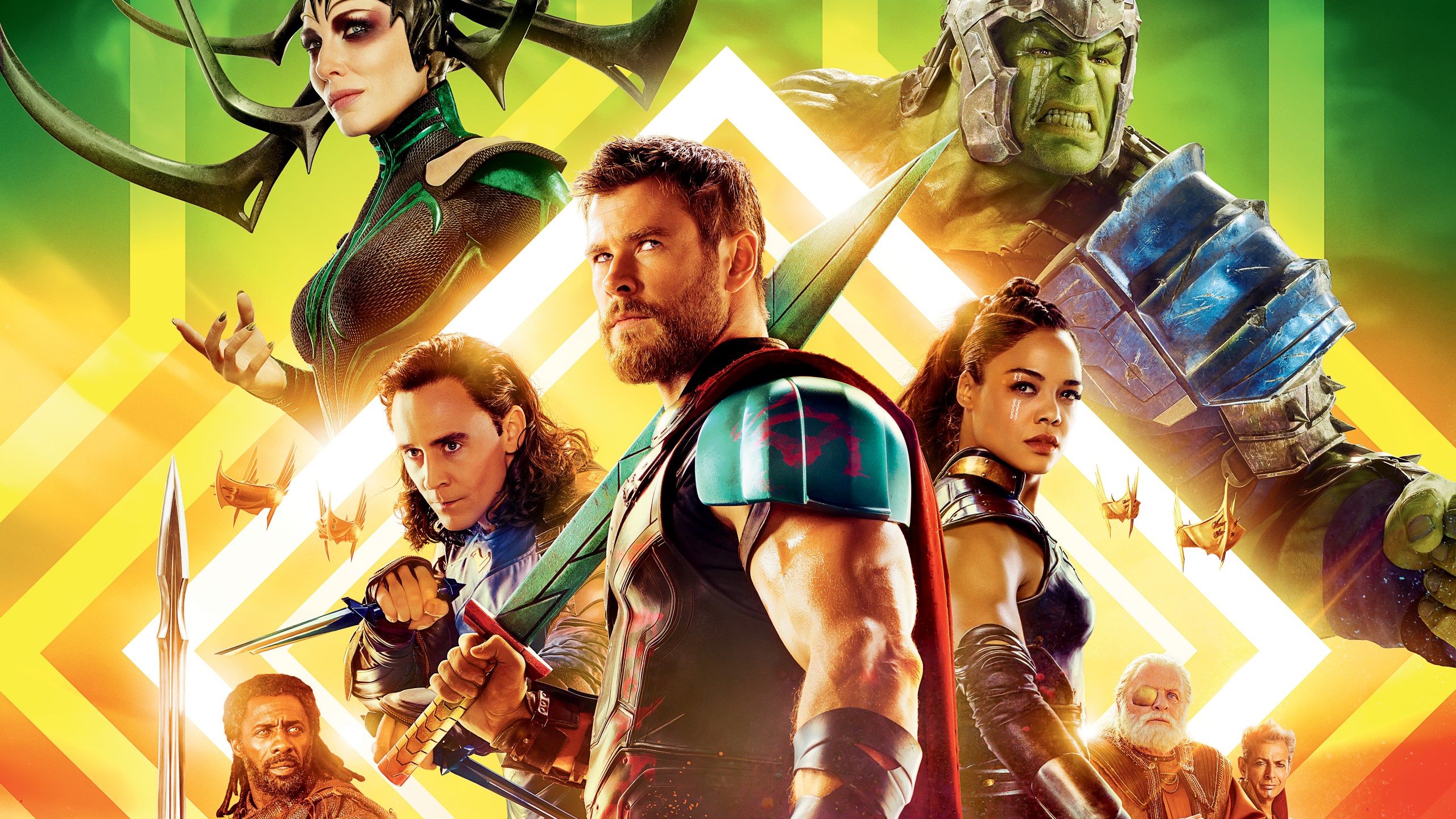 Allow me to start off by clarifying that, of all the Marvel Cinematic Universe franchise films, Thor has been my least favorite. The 2011 inaugural film wasn’t bad, the visuals of Asgard and its nine worlds were amazing, the characters of Thor, Loki and some of the supporting cast were intriguing. Thor: Dark World from 2013 was less stunning. In fact, when I just watched the blu-ray for it a few days ago as a refresher, it was my first time seeing it again since its debut in the theaters. The story wasn’t as gripping as the first and it had several angles that never hit the mark on their potential, such as the implied catty rivalry between Jane Foster and Lady Sif. Thor’s appearances in the Avengers films were good and left me with the idea that group dynamics is where the character has more to offer. I’m thankful to say that I was wrong on that account. The third film in the Thor franchise, Thor: Ragnarok, was just as ballsy as Captain America: The Winter Soldier (2014) with its ambitions and more frivolous than the Guardians of the Galaxy (2014). In having that balance, this is the Thor movie we deserve.

The first film was the introduction. The second film was war. The third film is just as the title indicates: Destruction. In Norse mythology, Ragnarok is the end-times, the twilight of the gods, and the destruction of Asgard. But it’s not definite, merely a cyclical reboot, like the Crisis storylines in DC Comics. The film delves more into Norse myths to bring them to the screen (or rather, Marvel Comics’ interpretation of said myths). Thor: Ragnarok starts off with the title character (Chris Hemsworth) imprisoned by the fire demon known as Surtur (voiced by Clancy Brown), who plays a major role in the Asgard’s end-of-the-world prophecy. His exchange with Surtur actually sets the tone for the rest of the film: Deft & self-aware humor that’s been missing from the franchise. The battle that follows against Surtur’s minions is a sight to behold, set against the backdrop of “Immigrant Song” by Led Zeppelin. Given the lyrics of the song, Robert Plant’s wailing voice, and the fact that it was used in the trailers and as a bookend in a later battle scene, the song should be the official anthem for Thor in the same manner as the Dropkick Murphys’ “I’m Shipping Up To Boston” is used for the New England Patriots.

The archenemy in this film is more compelling than the previous two. Academy Award winner Cate Blanchett portrays Hela, the Asgardian goddess of death and Thor’s older sister. Having been imprisoned in the Asgardian realm of the dead by Odin, her escape is a catalyst for Ragnarok. Speaking of Odin, Anthony Hopkins reprises his role here, but only in small doses. Odin is exiled on Earth and seems resigned to Ragnarok’s inevitability. When Thor and his mischievous brother Loki (Tom Hiddleston is having a good time in this role, by the way) come to Earth looking for their father, they’re pointed in his direction by a certain Sorcerer Supreme. The film’s director, Taika Waititi, is no stranger to the Marvel Cinematic Universe. He directed the mid-credits scene in 2016’s Dr. Strange and expanded upon it here. Benedict Cumberbatch reprises his role for a hilarious cameo complete with his character’s dry, deadpan remarks and outdoing Loki when it comes to magicks. Thor’s friends, Hogun and Volstaag re-appear, but Lady Sif sadly does not. Jaimie Alexander had scheduling conflicts with this film and her role in the NBC series Blindspot, so Tessa Thompson takes on the female warrior role as “Scrapper 142”, an Asgardian Valkyrie with penchant for hard-drinking. Idris Elba re-appears as Heimdall, the all-seeing gatekeeper of the Bifrost bridge now exiled and looking as rugged as Omar Sy’s Bishop in 2014’s X-Men: Days of Future Past. 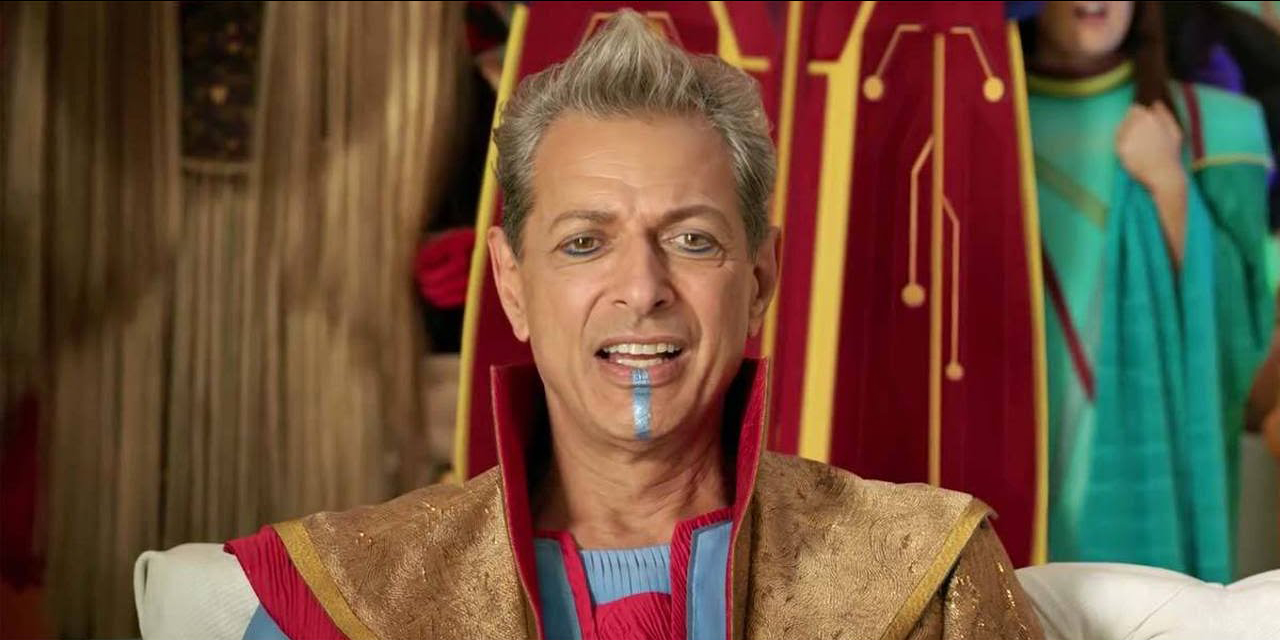 Between attempting to prevent Ragnarok, Thor is thrown off-course into a garbage heap of a planet named Sakaar which is ruled by the Grandmaster, played with hilarious off-beat glee by Jeff Goldblum. Like his fellow Elder of the Universe (The Collector, played by Benicio del Toro), the Grandmaster is a vastly powerful cosmic being with a monomaniacal obsession to keep himself preoccupied. In his case, it’s with gaming. More specifically, gladiator events. The trailer already gave away the fact that the Hulk returns in this film in one of those gladiator battles and he’s more vocal than he ever was in any of his MCU film previous appearances. Certain aspects of Thor’s battle with the Hulk were reminiscent of the final fight in Rocky V (1990). With the Hulk, the Valkyrie, and the shady Loki as his allies in tow, Thor must race back to Asgard to prevent its destruction. I won’t say how it went down, but I will say that the battle did not disappoint. 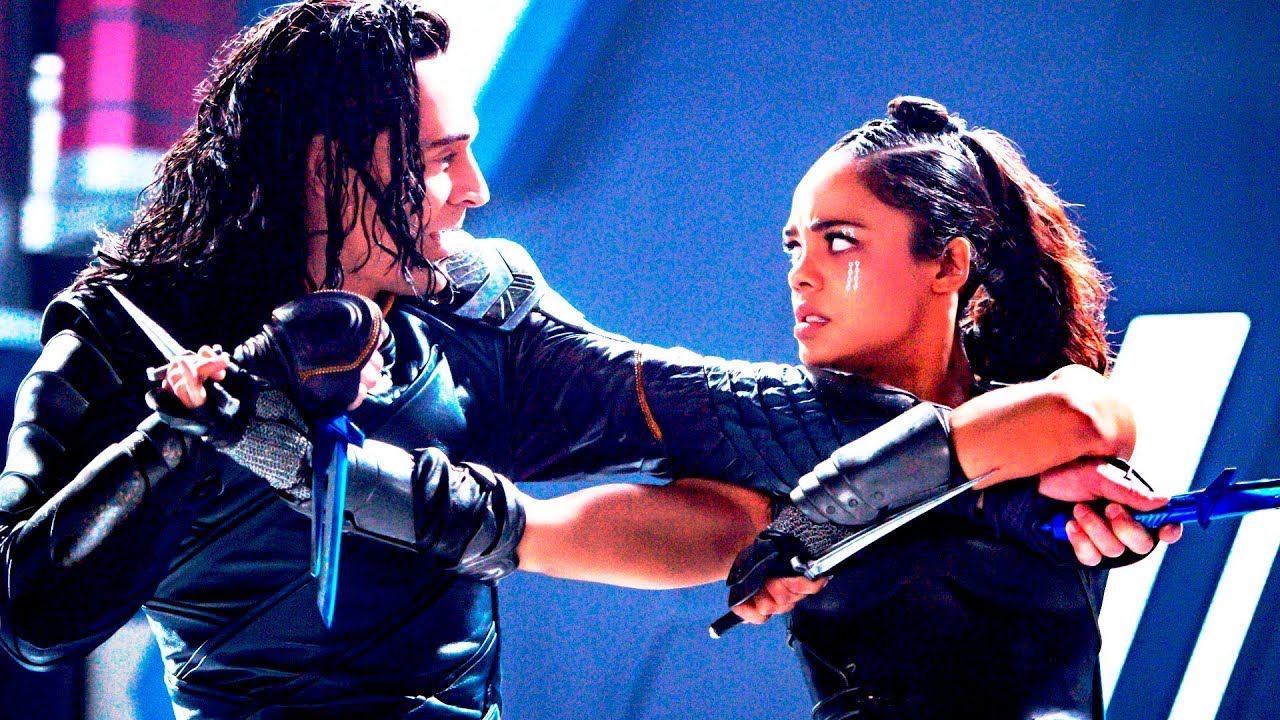 This has been the most enjoyable film of the franchise for me and I plan to see it once again. Of the Phase III films released so far, this one has set the highest bar. Everyone’s been raving about Spider-Man: Homecoming, but this film was better. The musical score was less tense and dramatic than before and made extensive use of synths a la TRON: Legacy (2010). The decreased urgency of the score reflects the lighthearted, but adult tone of the movie. Karl Urban’s appearance as Skurge the Executioner links the character’s newfound fondness of Earth weapons to references the Dallas Cowboys in a slick manner. Mark Ruffalo’s re-appearance as Bruce Banner/Hulk is very refreshing as he hasn’t been on-screen 2015’s Avengers: Age of Ultron. Also, his scenes with Hemsworth’s Thor (and Loki, by extension) are playful pokes at the dynamics that Joss Whedon established between the three characters in his Avengers films.

What’s also interesting is that, except for the Hulk and Dr. Strange, it was kept as a strictly Asgard/cosmic beings affair. Natalie Portman’s Jane Foster was not missed at all. There were no major Earth characters apart from the aforementioned two and that allowed the film to make greater use of its mythical foundations, like the appearance of the monstrous Fenris wolf (side note: its appearance here makes it a shadowy counter to Lockjaw from Marvel’s The Inhumans on ABC). Though the Thor films haven’t been bad, the previous two left much to be desired for from this viewer. If the saying, “the third time is the charm” has truth to it, then its veracity was proven in the form of Thor: Ragnarok. It’s more visually stunning with better action sequences than the previous installments. Like the circular nature of the title, this film was a welcome reintroduction for the franchise and its main characters: