Tabitha’s Cosplay Spectacular : This is Halloween!!!! 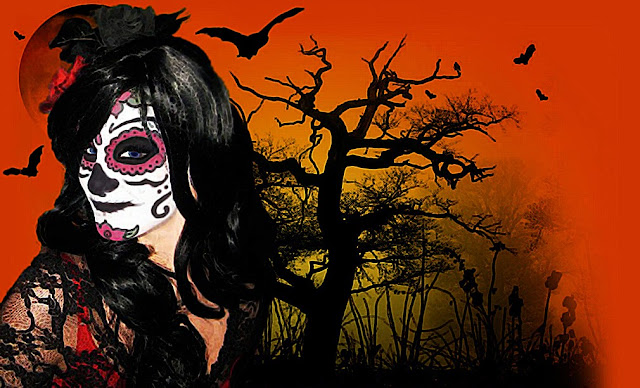 You may be expecting convention photos when you think “cosplay”, but not all cosplay is saved for conventions. After all, cosplay is short for “costume play”, which is a performance art in which participants wear costumes and accessories to represent a specific character or idea, (thanks Wikipedia). And even though most cosplayers are into the role-playing aspect that comes along with it, there is only one thing every cosplayer does do: COSTUMES!  Bet you didn’t see that coming! So with that in mind, know that there are plenty of opportunities to cosplay outside of the obvious. I myself can testify to the many-a-time I have dawned a costume outside of conventions for different reasons. So I ask what bigger cosplay event is there than the global celebration of Halloween? Where anyone who so wishes, can become whatever they want for one night in a costume. After all, don’t you feel like Superman when you put on that cape? And let’s not pretend you never got in character, even if it was just by accident ; )


So since that time is upon us, for my first cosplay post, I bring you, the best and worst of Halloween! *Queue evil laughter*
Let us begin with the nod worthy.

Halloween in Vegas. These costumes are bad-ass. Great real-life production of the classic green toy soldiers.

Tell me you know who these two are supposed to be. Nailed it!
Banksy’s famous street art piece “Flower-Thrower” brought to life. Excellent job by George Schnakenberg.
Pretty good job on this Doctor Octopus if I say so myself. I’m sure the construction of those “tentacles” were no easy task.

My guess on this one is some sort of Oni group. Though I am not sure, I dig it. It’s unique, and a bit frightening.

A zombie and his zombie dog…. Eating each other. That’s pretty sick, in an awesome way.  Unique to the huge zombie fan culture, and definitely well done.

On the zombie note, here’s one zombie you don’t want to run into. Frankenstein’s zombie monster! The creator Craig, combined a store bought mask and hands with football pads and painter’s drop cloths to bring his costume to life.

This costume was originally designed for LACMA Tim Burton/Dead Man’s Ball in LA. The creator Krysty Lynn, made this for her husband to wear while she dressed as Shock, but they never made it to the ball. Understandably, this resulted in tears (I have been there myself). So they were tipped off by a friend to visit downtown Disney Halloween night, and that they did. The hard work was not in vain as people crowded them for pictures all night.

Speaking of The Nightmare Before Christmas, I have two more for you. Here we have an incredibly cute Jack and Sally…

…And here we have some of the other members of the animated film, including Oogie Boogie’s evil doers, Lock, Shock and Barrel. Mickey’s Halloween party in Disneyland.
Do you guys remember Oblina from the cartoon Real Monsters? Christina from Pittsburgh brought this one to life with the help of her boyfriend. She even won a costume contest with this piece. Very cool.
And we can’t forget those who opt for Body paint. This one’s for the guys. And in all actuality, this is a pretty cool idea. Clever idea for the garters and thigh highs. Even those stringy pieces across her chest look realistic.
Now you know we have to highlight the kids too.

Cruella DeVille, Cruella DeVille, if she doesn’t scare you, no evil thing will. This youngster has it down. Her parents may have put together her ensemble (which is fabulous), but she’s got all the ‘tude. Carrie made this for her daughter who loves 101 Dalmatians.

Everyone knows the Coppertone baby! Well here’s the real deal!
Okay, so this helpless little lobster has no clue what’s going on, but he sure does look cute in that costume. I always appreciate an original idea too.

Speaking of original, has anyone ever seen this one done before? I don’t think so. Nice job.

Not sure how this little mouse is getting out of this trap for any candy, but at least the trap is cozy.

Another kid in a contraption, only it looks like this one has a bit more wiggle room. Lots of detail and work went into this “costume”. This is one lucky kid!

Tell me this isn’t spot on, and they’re kids no less. Young Napoleon has the expression down perfectly.
So we’ve seen the adult version of these guys earlier, but I think the kids have the adults beat. Really impressed with the poses Locke, Shock and Barrel have here. If I didn’t know any better I’d say they were professionals.

Adorably handsome Jack Skelington. (Do you sense there’s a Nightmare before Christmas theme going on here?)

If this kid isn’t the real life version of Russel from the animated movie Up, no one is. Photo via iwastesomuchtime.com

Who’s familiar with Tin Tin? This is absolutely perfect.

Clockwork Orange? Really? Brilliant! Love the expression. The glass of milk is the icing on the cake. Now let’s hope this boy never sees the film, or he might have some questions when he’s older.
Last but not least, how could I not include this little guy? The ever so adorable and fuzzy  from Monsters Inc. Getting some scare practice in.
Now here are a couple that are just plain wtf. 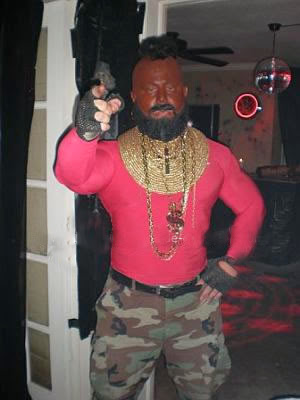 Mr.T. There are plenty of guys out there that could suit a Mr.T costume. This guy, not one of them. He didn’t even bother with his hands. 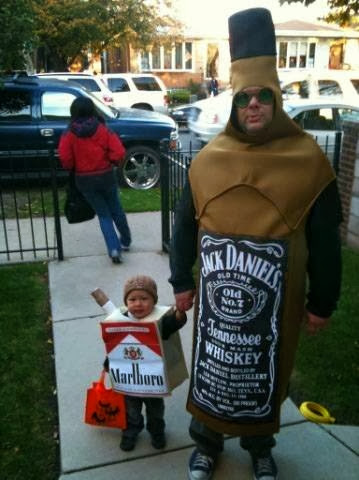 Though this costume coupling may be funny, I say wtf because this child’s dad is going to have some splainin’ to do when this picture emerges down the road.
Now let’s end this bit with the funny stuff.
Everyone knows Junior from Reno 911 right? What ever happened to that show? Anyway, anyone dressed as an officer from Reno 911 is going to be funny, as they all were ridiculously funny characters. This guy did a great job as Junior.

Crikey! The funniest part of this photo for me is the expression of the crocodile’s face. She looks pretty uncomfortable with his hand jammed in her face.

All three heats of Taco Bell hot sauce. With the actual messages from the hot sauce packets on their shirts.

Someone had the pleasure of being stuck inside this home-made claw machine “Claw and Order”, all night for a Halloween party.
Too soon? Strapped with all the makings of the deadly Jaeger Bomb.

This may look like a commercial for Publisher’s Clearing House, but it’s actually a couple’s costume that was flawlessly executed.

One of the best group costumes I have seen, a roller costume. Yes, a roller coaster costume, complete with two rows of four people. Brilliant.

And my all-time favorite to close out the cosplay highlights of Halloween, the tampon ninja.

But before we go, check out this short video of a port-o-potty costume taken to the streets of New York. It’s pretty fantastic.
So there you have it. I particularly love Halloween because it naturally beckons me to do what I already like to do. And I have found that when you can be anything at all with no rhyme or reason, people get pretty inventive and clever with their costumes. What will you be wearing October 31st
That’s it for this month’s Cosplay Spectacular! Tune in next month for another
Happy Halloween everyone! 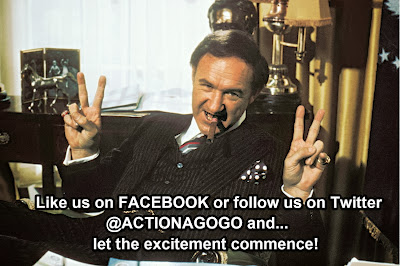