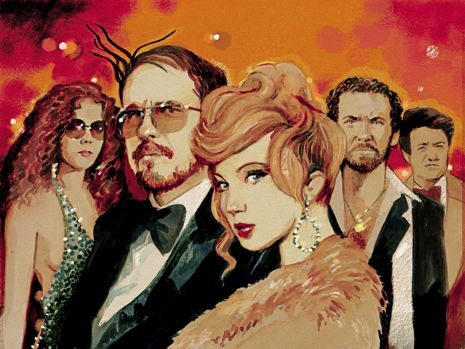 If you’re not familiar with filmmaker David O. Russell (American Hustle, Silver Linings Playbook, Three Kings) then you may be familiar with his on-camera “dramz” via YouTube.

Back in 2004, Russell brought together an ensemble cast for I Heart Huckabees, an independent comedy about existential detectives tracking down the meaning of life (kinda). Depending on who you ask, the film is either brilliant or bull $#!+, but the movie’s production woes went viral for all the world to see.

In the following two clips, O. Russell and actress Lily Tomlin explode at each other in the middle of filming two particular scenes. Caught in the crosshairs is none other than Academy Award-winning actor Dustin Hoffman. Poor Captain Hook tries desperately to diffuse the situation, but Tomlin has none of it.

There is a  happy ending to this story, though. Tomlin would later state that despite the fact that Huckabees was a contentious project for all involved, she would still work with O. Russell in the future. Aw.

The four letter words fly freely, so if you’re viewing this at work, by all means, use your head phones.


Troy-Jeffrey Allen writes about action/adventure for Action A Go Go. He is a comic book writer whose works include Bamn, The Magic Bullet, Dr. Dremo’s Taphouse of Tall Tales, and the Harvey Award nominated District Comics. In addition, Allen has been a contributing writer for ComicBookBin.com, OfNote Magazine, and ForcesOfGeek.com. His work has been featured in the City Paper, The Baltimore Sun, Bethesda Magazine, The Examiner, and The Washington Post.