Intuition is defined by Webster’s dictionary as “a natural ability or power that makes it possible to know something without any proof or evidence. A feeling that guides a person to act a certain way without fully understanding why. Something that is known or understood without proof or evidence“. Often, in fictional mediums, creators grant their characters with certain active or passive abilities that are tied to unexplained/theorized human phenomena. For example, the human body (weakly) generates an electromagnetic field, a character like Magneto possesses a high electrolyte count in his blood that increases and strengthens his own EM emissions to align them with the Earth’s own EM field which, in turn, accounts for his total awareness and control over the force of magnetism. Often, I find myself engaged in Big Bang Theory-esque arguments with fellow fanboys over the legitimacy of certain superhuman powers. My contention is that even the most seemingly passive abilities are legit and can be explained rationally. The opposing viewpoint is most often that only overt displays (like super-strength, energy projection, flight or even telepathy) qualify as actual powers.

One of my fellow writers here on Action A Go Go (Troy-Jeffrey Allen) and I constantly go back and forth concerning the character of Forge, an X-Men member whose mutant power is to understand, repair and invent technology. Troy tends to be largely dismissive of Forge, calling him “the mutant MacGyver”. While the MacGyver comparison was meant in jest, it’s actually not a bad one. Forge’s power makes him something of an expert problem solver, but only in the realm of technology. Also, his power is almost purely intuitive, even with his own personal working knowledge of science, engineering and machinery. It seemed like a lost cause explaining how this power is legit, but then I saw it actualized on the big screen a few months ago.

Earlier this year in computer-animated The LEGO Movie, there were a group of characters known as “Master Builders”. These characters are capable of building anything from just LEGO components. If they can imagine a thing, they can build it. They construct their inventions with such speed and precision that they don’t need instructions. Also (and I wish I could find a screenshot of this), after conceiving of device, the camera would shift to their point of view to show how their abilities also allow them to instantly assess the LEGO pieces around them to determine if they can be used to make their conceived device. Forge’s ability works in a near-identical fashion. 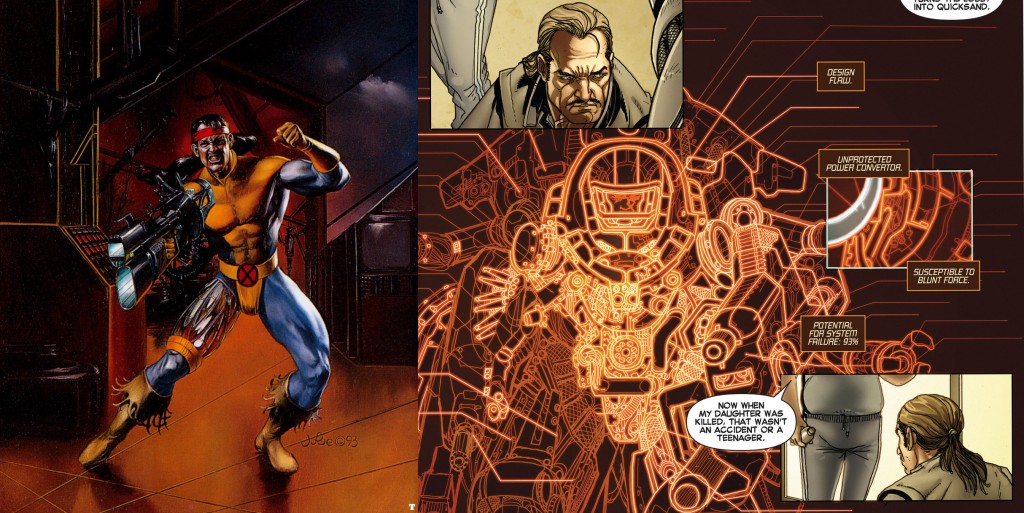 Forge’s power begins at being able to perceive mechanical energy (a combination of kinetic and potential energy resulting from the force of gravity or the movement or release of a machine and its components), but there are various aspects that come from it.

Seeing this energy in action automatically interprets the functions and operations of any machine or technological device within his visual range, allowing him to intuitively recognize both the potential and functional uses of any matter around him. This ranges from being able to instantly identify anything he could use as a lever (the simplest machine) to immediately developing a working knowledge of space-age futuristic technology at a glance.

His mutant power not only increases his understanding of existing devices, but intermingles with his thought processes to help him intuitively construct new devices. His power allows him to intuitively operate, modify and disassemble existing technology or create countermeasures for it. Combined with his natural genius-level intelligence, his power allows him to conceive, design and invent futuristic high-tech equipment within a drastically small amount of time.

The Master Builders, like Forge, are inventors: If they can imagine building something, they’ll figure out a way to do so (albeit only with LEGO components). If put in a practical context, they probably could’ve assembled all of my IKEA furniture in no time at all, instructions be damned. And Forge? If I had a power that made me Tom Swift, Thomas Edison and Steve Jobs all rolled into one, I’d create the technology to get America out of debt and keep myself VERY low-key. After all, who knows how many people would try to kidnap me and force me to make them weapons?

One Master Builder, Wyldstyle, was able to create fully-functional helicopters and motorcycles out of LEGO pieces in a matter of seconds. Forge could’ve done the same with materials that he found in a scrapyard within an hour. Forge has plentiful knowledge of mechanical engineering whereas Wyldstyle didn’t seem to. But even if the both of them were engineering-impaired, they could still conceive and build things, though they wouldn’t be able to explain the invention process to anyone outside of it as application of their abilities. Also, their abilities are alike in that they share theoretical and practical portions:

Whenever they’re approached with an idea (‘Hey Forge, have you ever thought about building the better mousetrap?’) or potential problem (‘Wyldstyle, how can we escape this dead-end?’), their minds begin automatically running through conceptual designs and theories on how to create something for the situation. This is the “theoretical” portion: A self-guiding autonomic thought process which runs through the design of a working invention, calculates the mathematics and equations involved, critically analyzes and discards inefficient solutions and so forth, all faster than their conscious minds can process it.

If a character like Reed Richards can be called an ‘actual’ genius inventor, then Forge’s power makes him a guy with a genius “How to Build a (fill in the blank)” video playing inside his mind, but on fast-forward. He is fully aware of everything his mind is doing and analyzing, but the process occurs without his personal direction. It all happens automatically when his power is in play and he is conscious of all the information his power provides, as are the Master Builders. Which shows that, though their abilities qualify as intuitive, there’s no subconscious factor at work.
The “practical” portion (which can be most aptly characterized as, the ‘MacGyver effect’), allows Forge to perceive mechanical energy in his environment, analyzing all the potential applications of objects in his field of vision, even seeing and repairing glitches in mechanical systems. The Master Builders were also seen to be able to analyze LEGO pieces for their potential usage, discarding the pieces they determined to be unusable. For Forge, this begins with an instant understanding of any high-tech device or mechanical system he observes, but also extends down to the simplest machine, the lever.

This portion allows both Forge and the MB’s to seamlessly filter and check their theoretical notions against the raw materials around them, ensuring that the idea can be properly constructed in reality.

Forge could certainly create just about anything Reed Richards or Tony Stark could conceive of. The only difference is, Forge could not necessarily RE-create something after building it once, or explain to someone else how to build it (or even necessarily how he built it himself).

Additionally, if Forge is in a room with raw materials, and you tell him to build you a certain device, he’ll build it. If you come back a few days later and give him identical materials to build the same device, he’ll probably build it the same way. If you give him a different assortment of scrap, he’ll build it differently, working with what he’s got. But say you give Forge raw materials that perfectly match the original pile but also has some additional pieces. If using these additional pieces will make the device better or more efficient in some way, Forge’s power will reflexively include them in the design. Forge has at least some control over his power, and could probably force himself to ignore these other pieces and build the device again the original way using only the original pieces but he’d have to consciously force himself to not create the best and most effective device possible. With Master Builders, their abilities almost-compulsively drive them to create the best device possible.

In light of this, it beggars the question as to whether intuitive powers are only useful in applied situations, or if can they be used for free-ranged thinking and conceptualization. I don’t know, but doing the compare and contrast was fun.

All images appear courtesy of both the LEGO & Marvel Entertainment Groups.